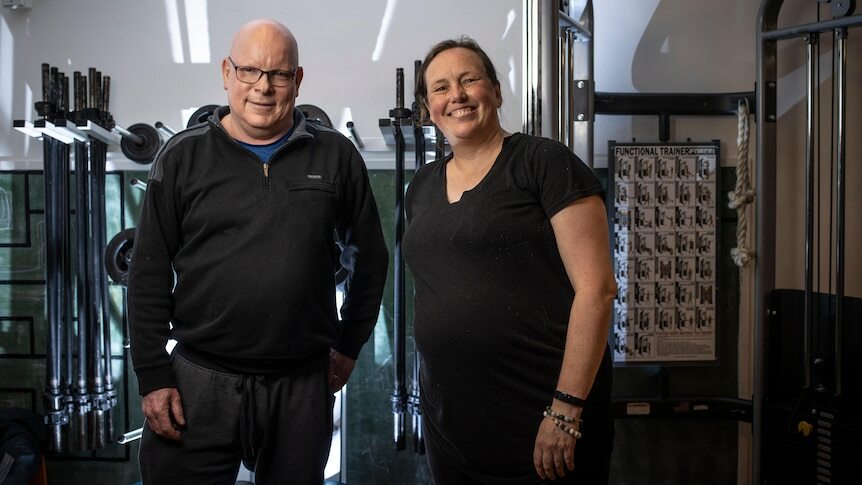 In the midst of a bout of anxiety and depression, Narelle Jenkins can't get out of bed, let alone leave her house.

Because she knows exercising can improve mental wellbeing, Ms Jenkins talked herself into attending a mainstream gym — but only after midnight, when no-one was there.

“I get really triggered by noise and movement, so gyms are really difficult places for me," she said.

Then she found the Just Move program, run out of the Glenorchy YMCA, in Hobart's northern suburbs, which caters exclusively to people with ongoing mental illness such as severe depression, anxiety and schizophrenia.

The first time, she lasted "about five minutes" before she had a "meltdown".

But knowing everyone in the class knew what it was really like to feel down helped.

In 12 months, Ms Jenkins has come a long way. But there are still some days where even just getting to the class is an achievement.

"People will recognise you're not having a great day and say, 'Oh, great, you made it,' — and you're really supported when you get here," she said.

"[And] you do tend to do a little bit more than what you thought you could."

No expectations around how to behave, what to wear

Nadia Cole, who runs the class, knows gyms can be boisterous environments at the best of times.

"I've been in and around gyms for 15 years, and still sometimes if it's peak time in some gyms, you walk in and you're like, 'Actually, you know what, I can't'," she said.

Exercise physiologist Nicholas Lee, who designs the program, says removing barriers to exercise for "vulnerable members of the community" is "really important".

"One of the things we see is the confidence improves," he said.

"We have people who've attended the program here and then they've actually been able to move on and go out into different gym environments and different social interactions."

The weekly class is free and easily accessible to people in Hobart's northern suburbs, and people can self-refer.

Mark Riseley has been attending for almost two years, and says the effects are, quite literally, visible — on his health and fitness tracking device given to him by the gym.

"When I’m at home, I've got my little cues on how my health is going, a bit of motivation to do my exercise.

"I've noticed over time that my resting heart rate has slowly declined, so I think I’m just getting a little bit fitter over time."

Miriam Moreton, the chief executive of Richmond Fellowship Tasmania, the NGO that runs the program, says the feedback has been positive.

"Many participants report significant improvement not only in their physical health but mental health too," she said.