Guy Sebastian distances himself from Vax the Nation campaign 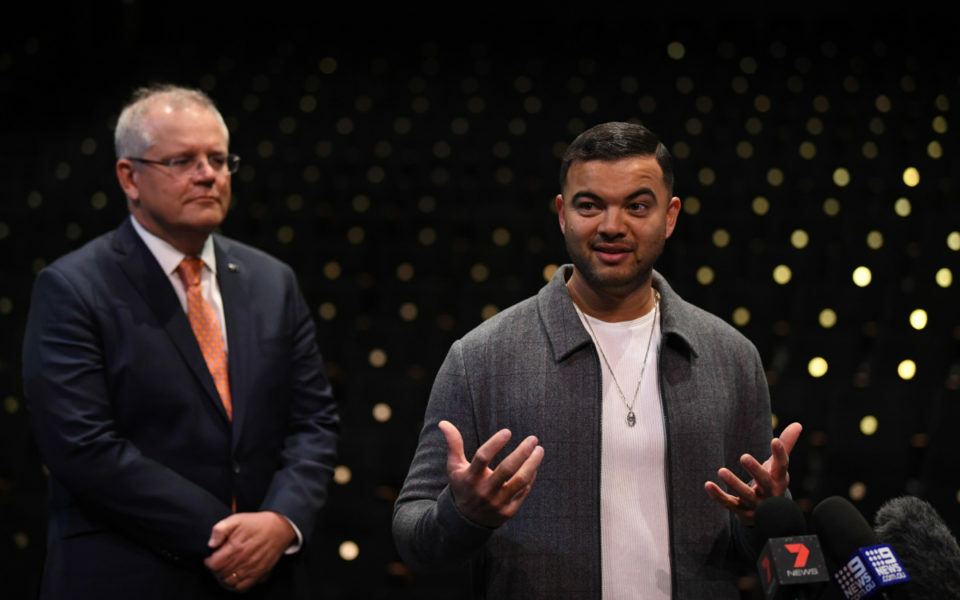 Guy Sebastian has found himself at the centre of a vaccination storm after a cryptic social media video posted to Instagram on Monday night.

The Voice host has drawn criticism from fans, fellow entertainers and even a high-rating talkshow host after appearing to distance himself from a campaign to promote COVID vaccination.

“To be honest, this is actually a really sad example of what happens when your career is dependent on trying to be all things to all people”, Lee wrote.

It came after Sebastian signed on to the Vax the Nation campaign. It features an advertisement of clips from live music events to the soundtrack of Powderfinger’s My Happiness, all cut short by COVID headlines.

The tagline – “stop the interruptions” – urges Australians to get COVID vaccines so that live entertainment can return.

But Sebastian, who was among hundreds of Australian artists to sign up to the promotion, drew anger from fans by apologising for the ad.

He said he would “never ever tell people what to do when it comes to their personal health choices”.

“I just want to say I’m really sorry. It was not a post that was communicated with love or compassion, which I feel is what’s needed when it comes to addressing things like vaccinations,” he said.

The video was quickly slammed by supporters of the campaign, which has involved some of the entertainment industry’s biggest names and largest promoters.

Sebastian responded further to the mounting criticism on Tuesday, replying to a tweet from hip hop artist Urthboy.

“Some artists are expending a huge amount of their cultural capital challenging audiences to get vaxxed,” Urthboy wrote.

“Then there’s Guy Sebastian, one of our most successful artists, who sounds like he agrees with the science but is terrified of losing his anti-vax $ [dollar].”

“Mate, with all love and respect, I think it’s important to listen to what I’m actually saying. I am double-vaxxed. I’m all for encouraging people to make the right medical decision for them,” Sebastian replied.

The singer also copped a spray from Sydney radio host Ray Hadley, who said he was “disappointed” in Sebastian’s backdown.

Sebastian phoned into to respond to Hadley live on air on Tuesday, accusing the 2GB host of supporting a “false narrative”.

“I haven’t said I don’t support vaccinations,” he said.

“Personally I am pro-vax”, he added, accusing Hadley of lumping him in with anti-vaxxers.

“The comment that was posted on my behalf dealt in absolutes and it’s not how I personally choose to get the message [across]. I am with the campaign.”

But when prompted by Hadley, Sebastian refused to change the wording of his Instagram video to make it clear that he was specifically referring to those with medical reasons.

Rapper Briggs said Sebastian needed to “unpack his spine”, with a message to “any musicians apologising for trying to get back to work by advocating for a safer audience”.

Elsewhere, comedian Joel Creasey reminded his followers of the title of the Australian Idol winner’s first single and said that trying to sit on the fence during a pandemic was a “fun new move” from Sebastian.

The Angels Brought Me Here singer has also copped plenty of public backlash, with Twitter users pointing out the irony of refusing to promote vaccines after appearing in commercials for other products.

The Shot columnist David Milner brought together a tough year for the artist, who has also been slammed for joining Scott Morrison to announce a funding package for the entertainment industry.

“Guy Sebastian going from an outspoken advocate for his industry, to a justifiably outraged prop in Morrison’s PR campaign, to a coward trying to appease anti-vaxxers, is quite the character arc,” Milner wrote on Twitter.

Others also remembered the stunt, which came after entertainers were excluded from the federal government’s JobKeeper scheme.

“Guy Sebastian wants his industry to get back to normal but would like to apologise for being seen to endorse something that will help get that industry back to normal. The same Guy who was used by the government to show that they were supporting artists but actually weren’t,” user @itsmarcusryan wrote.

NSW Premier Gladys Berejiklian, however, brushed off questions about whether Sebastian’s stance would have a negative effect on the vaccine rollout.

“It’s a democracy and people have views,” she said.

Vax the Nation and Guy Sebastian did not respond to requests for comment.