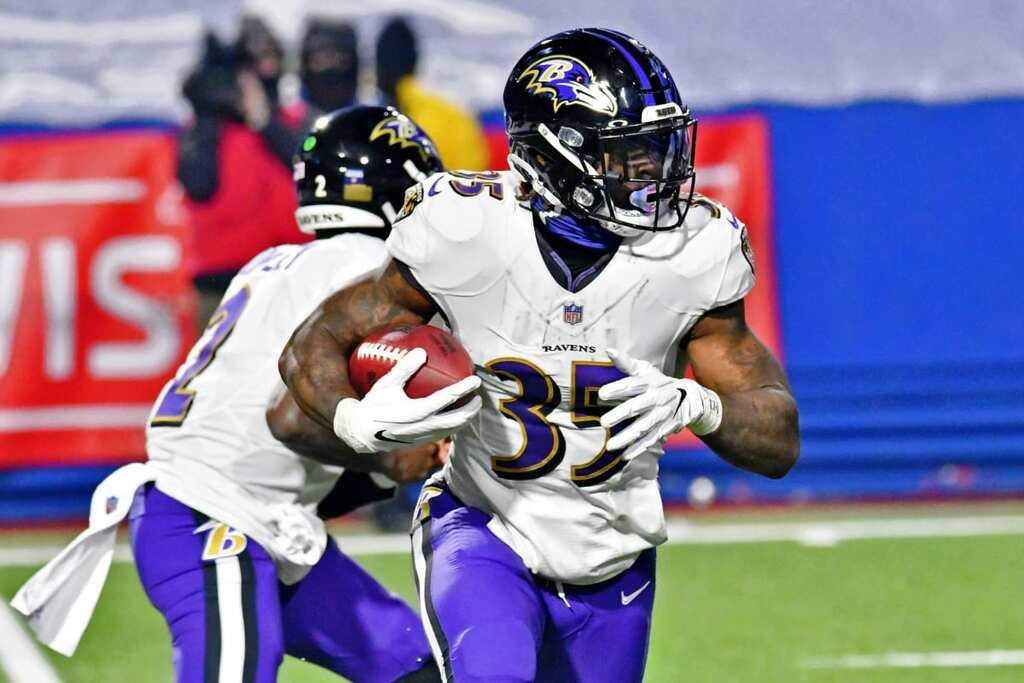 According to a report from ESPN's Adam Schefter, the Ravens fear running back Gus Edwards tore his ACL in practice Thursday afternoon. Edwards, who was set to be Baltimore's lead running back, would miss the season if that's the case.

This news is the latest in a string of bad luck for Ravens running backs. J.K. Dobbins tore his ACL in Baltimore's final preseason game on August 28. Dobbins was second on the team in rushing yards only to Lamar Jackson in 2020. Just this week, Justice Hill, Edwards' backup, tore his Achilles.

Cornerback Marcus Peters is feared to have suffered the same injury, a blow to an elite defensive unit.

With the news that Edwards is likely done for the year, the rushing duties for the run-heaviest team in the NFL fall to Ty'Son Williams, Trenton Cannon, who has 48 career carries, and Le'Veon Bell signed to the practice squad after Hill's injury. Schefter also reported soon after the injury that Devonta Freeman will be added to the Ravens practice squad. He added, "the idea is that Freeman will be promoted to Ravens' active roster."

Those who were quick to add Williams and Bell after the news of Hill's injury will be rewarded doing so first. It remains to be seen just how much their carries will be worth, though. Williams did not have a decorated college career across three schools — North Carolina, South Carolina, and BYU. He went undrafted in the 2020 NFL Draft and was on Baltimore's practice squad for the 2020 season.

Across four seasons in college, Williams only logged 233 carries, so it's hard to imagine he'll be getting the lion's share of the work, especially with Bell now in town. If you or someone in your league hasn't already, I recommend adding Williams to your team but don't expect the workload that Dobbins or Edwards would get to fall to him.

Bell may seem like the best add here given his pedigree, but his glory days are long gone. He's four seasons removed from an RB1 finish in his last season with the Steelers. In the three years since with the Jets and Chiefs, he's produced mixed results: RB16 with New York (thanks to over 300 touches) and RB63 with Kansas City as he took a back seat to rookie Clyde Edwards-Helaire. Bell has been a feature back before, and thanks to his pass-catching ability, he may be in line to get a large workload for the Ravens relative to the players' inexperience around him in the backfield.

Freeman, like Bell, appears to have his best days behind him. He played in five games for the Giants last year when New York also had a need at running back following Saquon Barkley's season-ending injury early in the year. Two years ago, he received a sizable workload with the Falcons, totaling over 1,000 total yards on more than 200 touches. I'm skeptical of any immediate impact for Freeman, but he is a player to keep an eye on. Cannon is a fourth-year pro who had 10 carries for the Panthers in 2020. With the addition of Bell, any path to fantasy relevance for Cannon is likely closed.

You should pick up Williams ASAP based purely on the unknown upside—Bell should only be considered in deeper formats—but I'd caution you on starting either because relying on either of them this week should be done out of complete desperation. Wait and see how things go Monday night against the Raiders.

The injury news could lead to an uptick in targets for the Ravens' top pass catchers — tight end Mark Andrews and receivers Marquise Brown and Sammy Watkins. That is if the Ravens elect to pass more. Baltimore ran the ball an NFL-high 555 times in 2020. Of those carries, 350 were taken by injured players (Dobbins and Edwards) or are no longer with the team (Mark Ingram). More of the rushing load may fall to quarterback Lamar Jackson, who led the team in rushing attempts and yards a season ago. However, it may be too early to tell how the litany of backfield injuries reverberate through the offense.