Gupkar alliance meets J&K L-G, inquiry ordered into use of force against Pandits

J&K Lieutenant Governor Manoj Sinha on Sunday ordered an inquiry into the alleged use of force on protesting Kashmiri Pandits at Sheikhpora area of Budgam district earlier this week.

The government has ordered a probe into the incident with a clear message that anyone found involved will not be spared and action under law shall be initiated against him, L-G Sinha said.

“A Special Investigation Team has been formed to probe into all aspects of (Pandit employee) Rahul Bhat’s killing and it will also look into the tear gas shelling incident. Strict action will be taken against those found guilty, L-G Sinha said.

The J&K Police had fired smoke shells and used batons to disperse Pandits protesting against the killing of a Pandit employee in his office in Budgam by militants.

The L-G administration has passed fresh directions “not to use any force anywhere” against protesting Pandits.

Defending the use of force against protesting Pandits near Sheikhpora, a police spokesman earlier said that there were inputs that (militants) may take advantage and may attack the protesters in order to create communal clash or tension.

“Therefore, in view of this, while sensing the security of the protesters who had resorted to violence and neglected the pacification requests by administration and to thwart evil designs of anti-national elements , the police were constrained to finally hurl few teargas smokes to disperse them,” the police said then.

National Conference’s Dr. Farooq Abdullah, who was leading the delegation, raised the demands made by protesting Pandits in Kashmir valley, especially about their security and positing to safer locations.

“The meeting was over the issue of security of Kashmiri Pandit employees in the aftermath of the killing of Bhat. We also appeal to Pandits not to leave home (the Valley). It will be sad,” Gupkar alliance spokesman M.Y. Tarigami said.

He said the Gupkar alliance demanded “sufficient protection for the employees at their workplaces and houses”.  “After the recent incident, it was not possible for Pandits to work in remote areas (in Kashmir), so relocate them to the areas where there is full security. The L-G has agreed to it,” Mr. Tarigami said.

A BJP delegation, which also met the L-G, described the targeted attacks on Pandits and non-local labourers as “evil designs of Pakistan”.

An official spokesman said the L-G assured the BJP delegation, headed by president Ravinder Raina, that all the Prime Minister package employees will be posted at secure district and tehsil headquarters and the J&K police will ensure adequate security of employees and their family members.

“It is a very sensitive and emotional moment for the entire administration and the nation, and we must stand united in the fight against terror. We have given full freedom to the security forces and the remaining will be eliminated soon,” the L-G told the BJP delegation.

Meanwhile, protests by Kashmiri Pandits continued for the third straight day in the Valley . The protesters, mainly employees who were recruited under the PM package, were demanding transfer from the Kashmir region to the safer places in Jammu region. 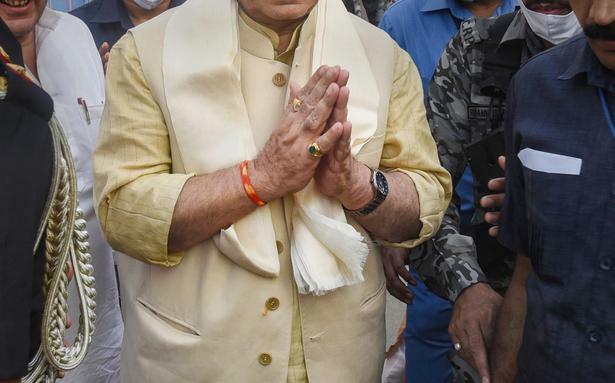 Rahul Bhat's killing: J&K Lt Governor orders inquiry into use of force against protesting Kashmiri Pandits
The government has ordered an inquiry into Rahul Bhat’s killing and a Special Investigation Team has been constituted.