The Peoples’ Alliance for the Gupkar Declaration (PAGD), an amalgam of local political parties in J&K, appealed to local Muslims and civil society members on Saturday “to ensure safety of minorities, especially Pandits,” living in the Valley.

“We appeal to the members of the civil society, religious groups and business community to rise to the occasion and understand their responsibility towards the minorities living in the Valley. They should ensure safety and security of their neighbours, especially those who belong to other communities, in these trying times,” CPI(M) leader and Gupkar alliance spokesman M.Y. Tarigami  told  The Hindu.

The appeal came in the wake of the targeted killing of a Pandit employee, Rahul Bhat, by militants in Budgam two days ago. National Conference president and PAGD chairman Farooq Abdullah chaired a meeting of the alliance at his residence in Srinagar, which was attended by Peoples Democratic Party president Mehbooba Mufti, CPI(M)‘s Tarigami and Awami National Conference’s Muzaffar Shah. During the meeting, the PAGD leaders met representatives of Kashmiri Pandits.

Mr. Tarigami said Kashmir had a history of maintaining communal harmony and brotherhood. “The 1947 episode, when the entire continent witnessed bodies piling up, Kashmir saw an unparalleled brotherhood among the different communities,” he added.

The PAGD, which jointly condemned the killing of the Pandit employee in Budgam, has decided to meet J&K Lieutenant Governor Manoj Sinha. “We will apprise the L-G about the demands of the Pandit community and their concerns. The government needs to intervene and ensure that Kashmiri Pandit employees should be posted at safer locations where there is a security cover,” Mr. Tarigami said.

He said the government should also provide accommodation to Pandit employees at safer locations as soon as possible. “We are tired of the Centre’s repeated line, “normalcy has returned to Kashmir”. On Thursday, we saw Rahul was killed in his office and on Friday Riyaz, a policeman, was shot dead in his home. They still say Kashmir is normal,” Mr. Tarigami said.

The PAGD also condemned the use of force against protesting Pandits in Budgam on Friday. “The cane charging of the protesters, who wanted to put across their point of view, was unfortunate. In fact, using force has become a norm in Kashmir. ‘Lathis’ are no way to establish peace in J&K,” Mr. Tarigami added.

Meanwhile, scores of the Kashmir Pandits, who have returned to the Valley under the special Prime Minister’s employment package since 2008, held a sit-in in Srinagar’s Press Enclave.

The protesters were demanding justice for Rahul Bhat’s family and flagged the issues facing the community at present.

“In the wake of targeted killing in the past one year, we are not feeling safe in Kashmir anymore. We want to be relocated to safer places. We have not come here to die,” a Pandit protester told  The Hindu.

“We are not bonded labourers. Right to life is above everything,” another protester said.

The Pandits have also condemned the police’s move to stop movement of Kashmiri Pandit employees and their families at the Sheikhpora transit colony in Budgam. “Many students could not take their examinations due to the restrictions,” they alleged. 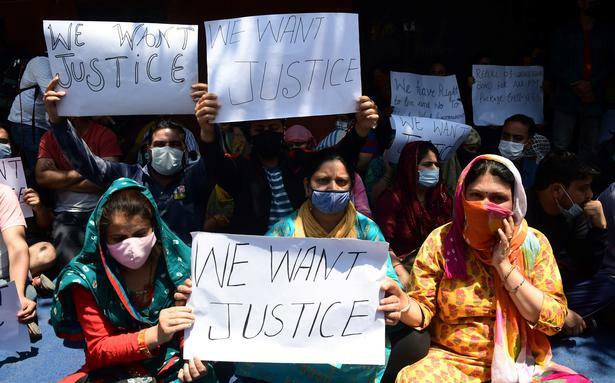