More than 1,500 employees of the Gujarat health department held a protest outside the State Secretariat in Gandhinagar, even after the Gujarat government on Thursday late night announced a hike in salary.

The State government had initially issued a stern warning to the employees to withdraw the agitation but doubled back to accept two of their demands — pay revision by ₹4,000 per month (but without change in pay grade) and 130 days Covid-19 duty pay for the days of work during the second wave last year.

However, the employees are adamant on change in their pay grade and restoration of old pension scheme, the latter of which has been a prominent pre-poll promise of the Congress and Aam Aadmi Party (AAP) ahead of the State election. Rahul Gandhi and Delhi Chief Minister Arvind Kejriwal recently announced that they would implement the old pension scheme if voted to power.

At the Secretariat in Gandhinagar and at most of the district headquarters across the State on Thursday, thousands of former and current State government employees held a “no work” protest, demanding restoration of the old pension scheme. The various unions have given a call of indefinite strike from September 27.

The Gujarat government has, however, not accepted this demand but maintained that other demands like salary revision, hike in various allowances would be looked into.

A slew of revisions

On Wednesday, when the State Assembly was convened for a two-day monsoon session, the opposition Congress demanded 30-60 minutes discussion on issues of various government employees who are agitating with their demands.

During the two-day session that ended on Thursday, the State had to deploy Rapid Action Force (RAF) personnel as there were over a dozen protests by different unions of State employees like teachers, health workers, forest guards, mid-day meal employees, Secretariat clerical staff and village computer entrepreneurs.

So far, the government has grudgingly hiked the salaries of policemen, revenue clerks, teachers, anganwadi workers, employees of the State roads transport and now health workers, while forest guards are still pressing for their demands.

“This time, the employees have become very demanding and they almost blackmailed the government,” a top official said, adding that the Opposition party Congress and AAP, wanting to gain a foothold in Gujarat, have instigated the employees by announcing pre-poll sops.

Last month, the State government constituted a five-member ministerial committee to talk to the representative unions of the employees. Post-talks, it announced a salary revision for anganwadi workers, State road transport corporation employees, policemen and others.

On Wednesday, the government after negotiation with the unions of road transport corporation, announced increase in salaries of drivers, conductors and other technical staff.

In a press release, the government said this revision will benefit around 37,000 employees of Class III and Class IV of the State transport, including around 30,000 drivers and conductors. This is the first time since 1997 that allowances of the staff of the public transport service provider have been revised upwardly.

However, the government has not made any statement on the old pension scheme but maintained privately that it is not “financially viable” to move back in the old system.

It all began in the month of August when Mr. Kejriwal, during his campaign visit in Gujarat, raised the issue of Gujarat policemen’s salary being lower than that of their counterparts in other State and even the national capital. 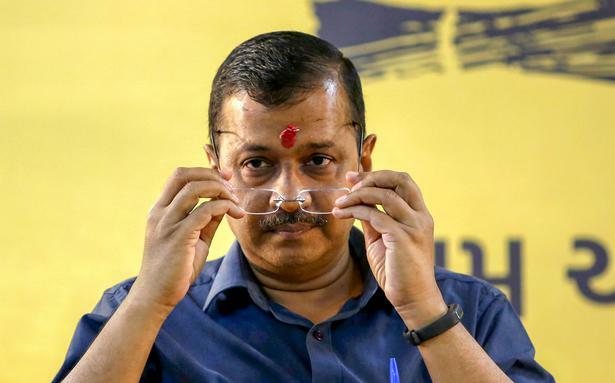 The Hindu
One subscription that gives you access to news from hundreds of sites
Arvind Kejriwal, Punjab CM Bhagwant Mann to meet sanitation, contractual workers and youth in Gujarat

The two AAP leaders will also hold a two hall meeting with the youth from the State, where Assembly polls…

The Hindu
Is there any truth to Kejriwal’s allegation against PMO official Hiren Joshi?

At a show of strength ahead of the polls in Gujarat and Himachal Pradesh, AAP national convenor and Delhi chief…

The Times of India
One subscription that gives you access to news from hundreds of sites
ECI officials to visit poll-bound Himachal, Gujarat today