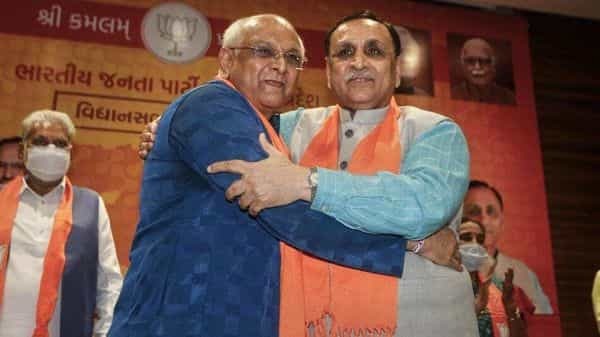 The swearing-in of the Bhupendra Patel-led government in Gujarat will take place tomorrow at Raj Bhawan in Gandhinagar. According to reports, over 20 leaders would be sworn in as ministers.

The majority of ministers in the cabinet headed by previous Chief Minister Vijay Rupani are expected to be dropped. The party has reportedly decided to give a chance to new and young faces to work with the newly sworn-in CM.

"It is likely to be a comparatively young cabinet with fresh faces. Patidars are likely to dominate the cabinet," news agency ANI quoted a source as saying.

59-year-old Patel was sworn in on Monday after the sudden resignation of Vijay Rupani on Saturday. Patel belongs to the Patidar community.

The MLA from Ghatlodia was unanimously elected BJP legislature party leader on Sunday and was sworn in as the state's 17th chief minister by the governor in Gandhinagar on Monday.

The party had earlier in the day said the ceremony would be held on Wednesday. Even the posters at Raj Bhavan had mentioned 15 September as the date for the ceremony. However, the posters were taken down today afternoon.

The governor’s office confirmed that the ceremony has been postponed to Thursday. "The swearing-in ceremony of ministers will take place at 1.30 pm on Thursday," Manish Bharadwaj, officer on special duty to Governor Acharya Devvrat, told news agency PTI.

Neither the BJP nor the state government gave any reason for the postponement.

"There is a massive exercise going on to see that leaders who won't be accommodated in the cabinet will not feel left out," the source added.

The sources said those not being retained have been assured of tickets in the next assembly elections.

The party is counting on Patel to shore up the party's fortunes ahead of the assembly elections towards the end of next year. In the 2017 Assembly elections, the BJP won 99 of the 182 seats and the Congress got 77.