'Guardians of the Galaxy 3' Adam Warlock: How Will Poulter changes the MCU 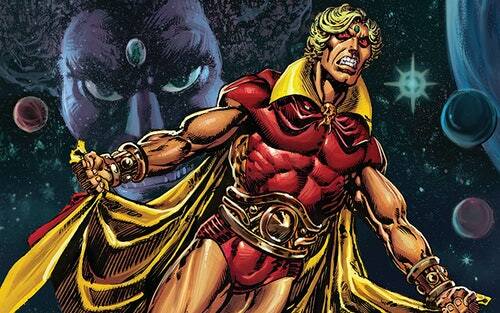 Missing from the battlefield of Avengers: Endgame was the messianic superhero known as Adam Warlock. But finally, after years of Easter egg teasers, Adam is on his way to the Marvel Cinematic Universe.

What Happened? — On October 11, Deadline reported that Midsommar actor Will Poulter will play Adam Warlock in the third Guardians of the Galaxy movie, which is slated to arrive in theaters on May 5, 2023. Director James Gunn confirmed the rumors on Twitter, sharing the Deadline report by welcoming Poulter to “the Guardians family.”

Details about Guardians of the Galaxy Vol. 3, let alone specifics about Adam Warlock, are currently under lock and key. That’s perhaps literally speaking, as Adam’s “appearances” in the MCU thus far have been inside a solid-gold cocoon.

But it is a big deal that Adam Warlock is making his overdue debut in the Marvel Cinematic Universe. With the Infinity Saga officially over, it might just be time for Adam Warlock to form his own comic book team: the Infinity Watch.

Infinity And Beyond — Adam Warlock made his first comics appearance in Fantastic Four #66 and #67, under the name “Him,” by creators Stan Lee and Jack Kirby. He later got the name “Adam Warlock” in Marvel Premiere #1 by Roy Thomas and Gil Kane.

An amalgamation of Jesus Christ and former Fawcett/current DC Comics character Captain Marvel (now known as Shazam), Adam Warlock is an artificially created being with extremely powerful superpowers. His power set includes everything from super-strength and speed to regenerative healing and the manipulation of physics. If Adam gets his butt kicked hard enough, he’s also able to recuperate inside a cocoon.

Adam was first “teased” in one of several post-credits scenes in Guardians of the Galaxy Vol. 2, back in 2017. In that scene, Elizabeth Debicki’s Ayesha gazes upon Adam, her creation, which she believes is her weapon meant to destroy the Guardians of the Galaxy. That might still be the case for Vol. 3, as Ayesha could finally enact plans to take her revenge by awakening Adam.

But Adam Warlock’s importance may extend beyond one more Guardians of the Galaxy sequel. As a prominent fixture in Marvel’s comics universe, Adam Warlock has appeared in plenty of crossover storylines — usually whenever the word “Infinity” is in the title, such as the recent 2018 events Infinity Countdown and Infinity Wars.

What’s most interesting about Adam Warlock’s history, however, is that Adam was at one point a guardian of the Infinity Gems. In the aftermath of the original 1991 crossover epic The Infinity Gauntlet, Warlock was assigned by the Living Tribunal to keep watch over the separated Infinity Gems, with Adam taking stewardship of the Soul Gem. (“Infinity Stones” is an MCU term. They’re “Infinity Gems” in the comics.)

Others joined Adam — including, surprisingly, Thanos — to form a team that became known as the “Infinity Watch,” in which each member protected a single gem/stone.

For a long time, this fueled speculation among Marvel fans that Adam’s cinematic debut would come in Endgame, seeing as the Soul Stone was the last of the Infinity Stones in the MCU. That wound up not being the case. Fans, as a result, have been eagerly awaiting Adam’s debut in the MCU for years.

Watching for Infinity — Phase Four of the MCU has shown the franchise move on from the Infinity Stones. The recent reimagining of the Ten Rings, as well as the Infinity Stones being repurposed as paperweights in Loki, shows the MCU is much done with knuckle jewelry. Haven’t you heard? “Multiverse” is the new bling.

The Inverse Analysis — The long-awaited introduction of Adam Warlock in Guardians of the Galaxy Vol. 3 shows the MCU is always preparing for the future.

Vol. 3 will be the last movie for the Guardians of the Galaxy, but it doesn’t have to be the end for the cosmos of the MCU. There are many other bizarro characters who hail from the outer reaches of Marvel’s space; any of them could become fan favorite.

Adam Warlock might even be one of them. Unless he destroys the Guardians first, of course.