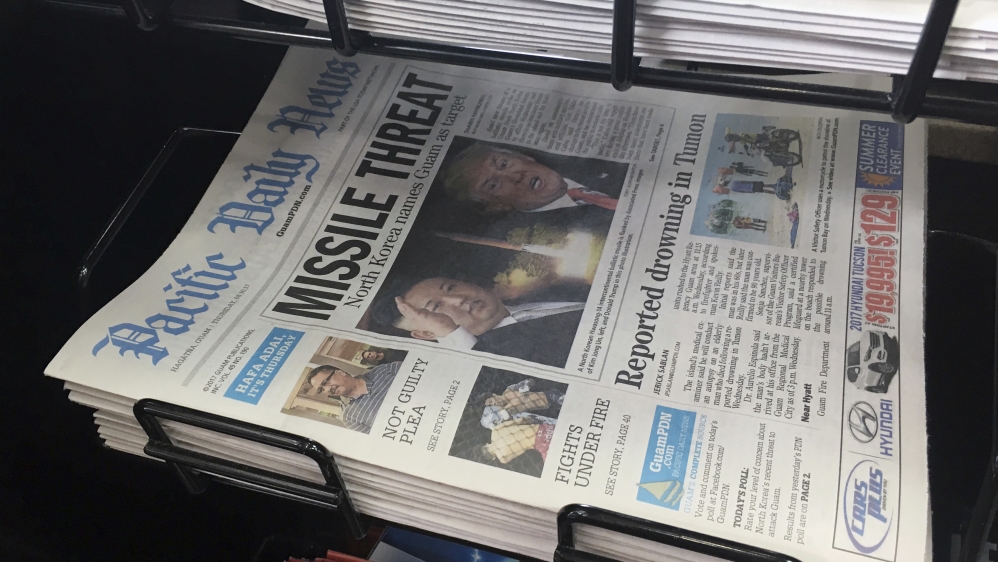 An attack on Guam would be considered an attack on the United States, Guam's governor warned in response to a threat that North Korea would create an "enveloping fire" around the US territory.

The people of Guam woke up on Thursday to another pointed threat from Pyongyang, which vowed to complete a plan to attack waters near the island by mid-August.

However, Guam's governor Eddie Calvo warned North Korea's leadership that attacking the territory would be considered an attack on the US.

"Any type of attack will not be successful but at the same time an attack on Guam will be considered an attack on the United States and will be met with an overwhelming force," Calvo told Al Jazeera.

While some residents of Guam say they are confident the US military will protect them if North Korea attacks, others are discussing emergency plans with their families.

"It's actually been scary since yesterday," Kate Quiambao, a resident of Guam, said.

"Right now, I'm planning with my family what are we going to be doing from here on. We're trying to plan out if there's going to be an emergency and things like that."

The US military on Guam consists of two bases that are home to 7,000 troops - Andersen Air Force Base in the north and Naval Base Guam in the south.

"I feel that the presence of the military on Guam will help us a lot," said Virgie Matson, 51, a resident of Dededo, Guam's most populated village.

"They are here to protect the islands, just in case something happens."

"How Trump replied to it, I think it really infuriated North Korea, honestly. But we'll see what's gonna happen next," he said.

Despite the military presence and service, some Guamanians feel unprotected and insecure in this time of crisis.

"What about all those who don't have any protection to help them? I just don't agree with this; it is scary." Lou Meno said.

For years, North Korea has claimed Guam is within its missiles' striking distance, making furious statements each time the US flew powerful bombers from the island's airbase to the Korean Peninsula.

"We have little kids that they don't know what's going on, and what is the president doing to protect us? I blame him [Trump]," Meno said.