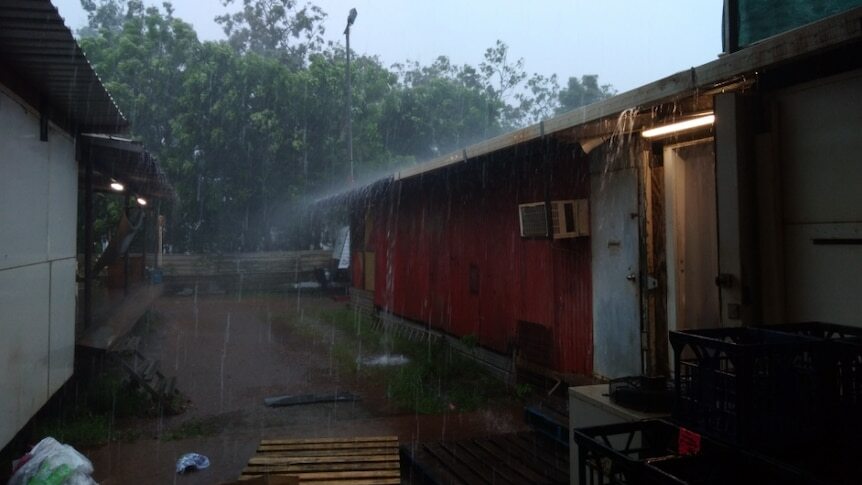 If a tropical cyclone bears down on his remote Territory island home tonight, store manager Eugene Anderson may be seeing out the storm from a shipping container.

It's a worst case scenario for Mr Anderson, the manager of the Groote Eylandt Bush Shop, but he's making sure precautions are in place to protect his wife and five employees.

"If worst comes to worst, and the winds do get destructive, we do have shipping containers out here which are able to shelter us and our staff in, and that's a good thing," Mr Anderson said.

Ex-Tropical Cyclone Tiffany was downgraded to a tropical low as it crossed Cape York in Far North Queensland last night, but it is expected to regain intensity by later this evening.

If it stays on its current track, the NT island of Groote Eylandt – a service and mining hub, home to multiple remote Aboriginal communities – is sitting squarely in Tiffany's path.

Jude Scott, from the Bureau of Meteorology (BOM), said the system was expected to reach category two intensity before crossing the coast tomorrow.

Ms Scott said category 2 systems could bring wind gusts of up to 165 kilometres per hour.

A tropical cyclone warning is current for most of the eastern Top End coast, from Nhulunbuy to the Queensland border.

Mr Anderson said the cyclone threat was keeping Groote residents "on edge", especially with cases of coronavirus in the community.

"It definitely does add an extra layer of worry to it, absolutely," Mr Anderson said.

"We're dealing with that [COVID] situation and then the cyclone comes in over the top of it, it does tend to escalate things a little bit … when you put the two together it can be quite stressful."

For resident Corallie Ferguson, who is on the island's emergency management committee, the biggest concern is making sure Groote's remote community residents are prepared for impact.

"We're very concerned about the communities, obviously, and communicating with communities to make sure they take shelter if they need to," said Ms Ferguson, the chief executive of Groote Eylandt and Bickerton Island Enterprises (GEBIE).

She said the chief concern was for those in older houses that may not withstand a severe cyclone, and said now was the time for those residents to decide whether or not to leave their homes.

"Everybody knows where to go, they know where the shelters are and if they need to go there.

"And we need them to decide today."

Ms Ferguson said the island's organisations and emergency services were working together to "see the cyclone out".

NT Police has ruled out the possibility of evacuating residents from the island before the cyclone hits.

In 2019, Cyclone Trevor forced the evacuation of hundreds of residents from Groote Eylandt, primarily because it was expected to hit as a much bigger, category four, system.

Daily rainfall totals of 100mm to 150mm are expected around the centre of the weather system, with up to 200mm or more forecast in some areas.

A flood watch is in place for Carpentaria coastal rivers.

Ms Scott said it was unlikely the system would develop into a category three cyclone.

"The system is moving quite quickly over the Gulf of the Carpentaria, so at this stage we don't think it's going to be spending enough time over water to intensify to a category three strength," she said.

"If they have the ability to isolate in their own homes — and they are satisfactorily coded for the oncoming weather event — they'll stay in that location, or they'll move to another location that's coded," he said.

He said coronavirus patients had been advised to stay away from shared cyclone shelters to limit the spread of the virus.

He said extra staff had been deployed to Numbulwar and local controllers had activated their cyclone plans.

"There are no plans to evacuate from any of the communities in the warning or watch localities," he said.

However, he said that could change if the weather system dramatically intensified.