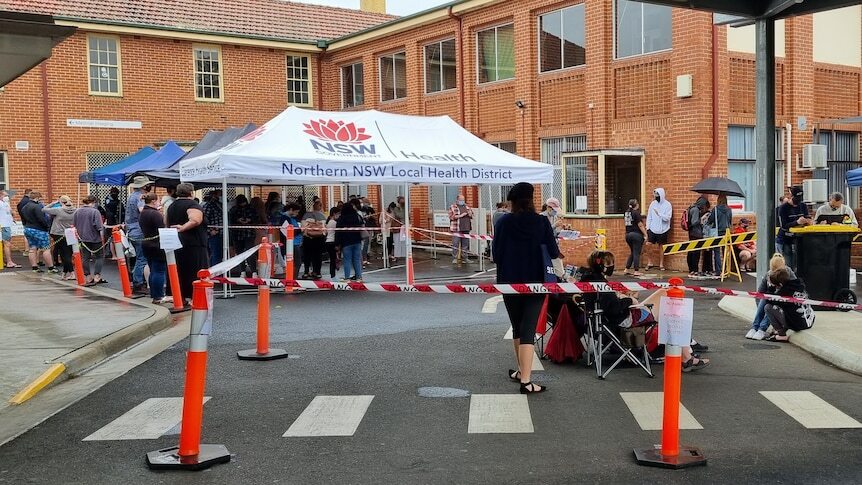 Eighteen months after the pandemic arrived in Australia, this town is getting its first taste of COVID-19.

Grafton, population 19,000, is the largest town in the Clarence Valley local government area.

Until now, residents have felt immune from the Delta outbreak in Sydney, more than 600 kilometres away. But not any more.

NSW Health said there have been 23 active COVID-19 cases in the past fortnight.

"We were probably a little bit complacent beforehand when it was in Sydney and far away from us."

And with fully vaccinated Sydneysiders set to be given the all-clear to travel to the region on holiday as early as Monday, there are concerns about the virus spreading further and about the local health system's capacity to cope.

"And I understand the community is concerned and so they should be, because COVID is a killer."

The modest number of COVID-19 cases has already had a domino effect.

The ABC has spoken to several people who said they waited hours for a COVID-19 test at Grafton Base Hospital due to high demand.

Others chose to make a 170-kilometre round trip to Coffs Harbour to get swabbed.

Leisa Moar, a teacher, said she waited in line for three hours outside the Grafton Hospital.

"There was nowhere to sit down, there's no toilet facilities unless you go into the hospital," she said.

There are concerns around a local school that has been linked to several infections this week.

Unlike their counterparts in Greater Sydney, students in the area have been permitted to learn on campus.

But South Grafton Primary has been closed since a positive case was identified last week, sending 650 students and staff into isolation.

Another family has already been infected, something Mr Gulaptis was particularly concerned about, with all students in NSW to return to classrooms later this month.

"We know that COVID is highly transmissible and we can see that with what's happening in Grafton at the moment," he said.

While three-out-of-four people in NSW over 16 years old are now fully vaccinated, regional areas are lagging behind, with just 56 per cent of the eligible population fully vaccinated in the Clarence Valley LGA.

According to the state government's roadmap, unrestricted travel will be permitted from the Monday following the state reaching the 80 per cent double dose mark.

That target could be reached this week.

Mr Gulaptis and four other northern NSW MPs from across the political spectrum wrote to the then Berejiklian government, requesting regional areas remain closed until local vaccination rates reach those seen in the cities.

Mr Gulaptis said the previous government agreed to their request – a promise he hopes the Perrottet government will honour.

Premier Dominic Perrottet has maintained his commitment to further ease restrictions when NSW reaches 80 per cent double dose coverage but said his government had not yet made a call on regional travel.

"Our commitment to the people of our state has been if we can get vaccinated and reach those targets, we can open up freely," Mr Perrottet said.

"There has been concerns raised about regional New South Wales, if you look at those double vaccination rates.

"I have not had many discussions with my ministerial colleagues in relation to that aspect, yet. That will be an issue that will be discussed."

The Premier is expected to reveal any changes to the 80 per cent COVID-19 roadmap today.