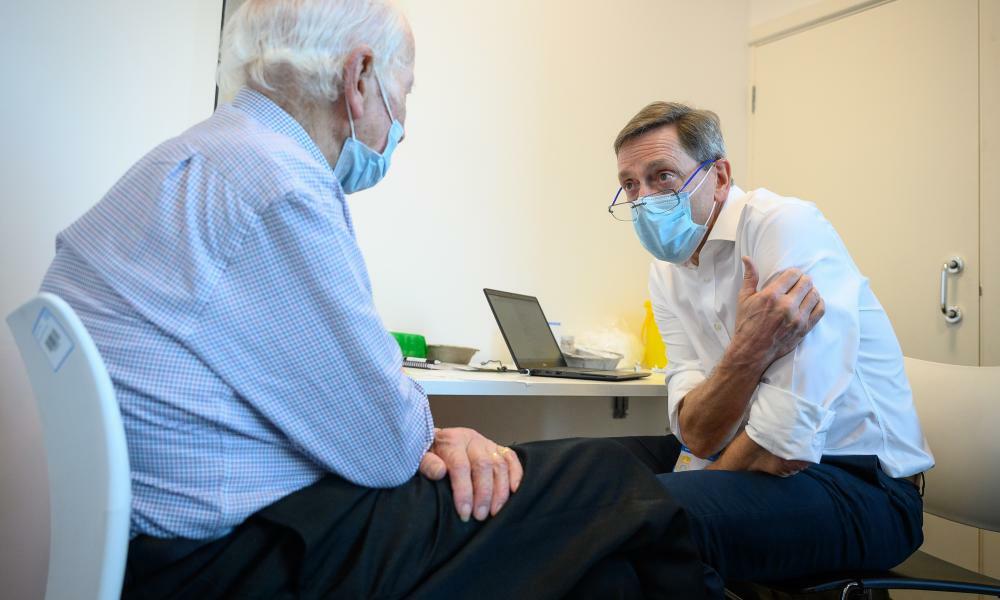 GPs in England are “finding it increasingly hard to guarantee safe care” for millions of patients as a shortage of medics means they are unable to cope with soaring demand, Britain’s top family doctor has warned.

Amid a debate over access to face-to-face appointments, Prof Martin Marshall, chair of the Royal College of GPs (RCGP), defended the growing use of remote consultations during the pandemic.

He said a 4.5% fall in GP numbers across England was to blame for the crisis in primary care and warned it had led to a risk of mistakes being made.

In 2015, the government vowed to hire 5,000 more GPs within five years. But the number has instead fallen. The number of family doctors working the equivalent of full-time hours fell by 1,307 to 28,096 between September 2015 and March 2021, according to an analysis of NHS data by the RCGP, with growing numbers quitting due to burnout both early and late in their careers.

At the same time a growing and ageing population with complex conditions in addition to an overall increase in demand for care means GPs are beginning to crack under the pressure of unsustainable workloads, according to Marshall. As a result, overworked family doctors are increasingly fearful of making serious mistakes or missing crucial signs of potentially life-threatening conditions.

In an interview with the Guardian, Marshall said: “The fact that general practice is under such enormous pressure means it can’t deliver the patient-centred services that it wants to. Many GPs are even finding it challenging to maintain a safe service.

Marshall spoke out amid a row over the ability of patients to access face-to-face appointments. Family doctors were told in March 2020 to adopt a “total triage” approach and only see patients in person after a video consultation to reduce the risk of spreading coronavirus.

NHS England then wrote to GPs in May this year telling them to “ensure they are offering face-to-face appointments”, adding that remote appointments “should be done alongside a clear offer of appointments in person”. But some patients have struggled with access. In July, in-person appointments made up 57% of the total compared with 80% in the same month in 2019.

This week it emerged that a coroner had warned the inability of some patients to see GPs in person was contributing to deaths. Alison Mutch presided over five inquests during the Covid pandemic in which she said patients should have had better care, the Health Service Journal reported. Some could have been referred to hospital more quickly for vital treatment had they been seen face to face, said Mutch, the senior coroner for Greater Manchester.

Marshall said the move to remote consultations during the pandemic was necessary to stop the spread of the virus and keep patients and GP teams safe, and that they were welcomed by many patients who find them more convenient. They would remain an option as things got back to normal, he added, because they had advantages.

Growing numbers of GPs are quitting due to burnout. Six in 10 say their mental health deteriorated in the last year, and about two-thirds (63%) say they expect things to get worse, surveys show.

“A growing number of younger doctors are leaving general practice completely,” Marshall said. Others in their 50s were retiring early “because they don’t want to die in the harness”, he added. There were positive signs that more trainee GPs were coming through the system, but the number leaving the profession was still greater than that joining, he said.

Despite restrictions easing, the pandemic was far from over, Marshall warned. He said GPs could not afford to be complacent or unnecessarily put patients at risk of becoming infected.

“People think the pandemic has gone,” he said. “[But] one in 70 people in England are still infected. And if a fit person shedding the virus sits next to a vulnerable, older person in a waiting room and that person picks up the infection, the consequences will be dire. Although it’s unpopular, as GPs we’re still following good infection control guidance.”

The RCGP wants the government to introduce an emergency rescue package to shore up surgeries. This would include recruiting 6,000 more GPs and 26,000 additional support staff such as nurses and receptionists by 2024. Without these changes, Marshall said, patients would not get the care they needed.

This week the prime minister announced a new health and social care levy, including a £9.4bn funding boost for the NHS next year.