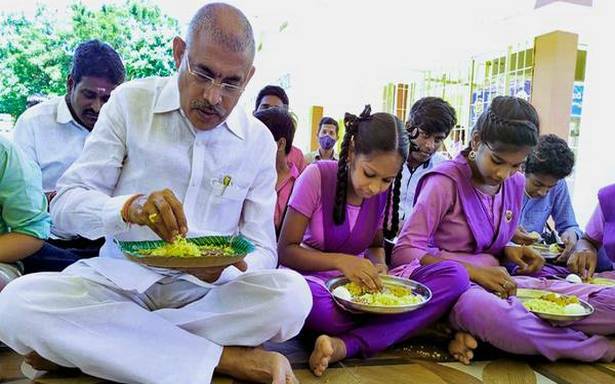 Backward Classes Welfare Minister Ch. Venu Gopala Krishna on Wednesday said that the State government was preparing to repair roads across the State at an estimated cost of ₹5,000 crore.

“A majority of the roads laid during the last few years need repairs, which has exposed the poor quality of work done by the previous government,” he said while addressing the media during his visit to a government high school in Ramachandrapuram on Wednesday.

Blaming the previous government (TDP) for the poor condition of the road network, the Minister said that the opposition parties that were campaigning on the issue should introspect the reality.

“We appeal to the opposition parties to support the State government or be calm on the road network system.

However, they are out to defame the State government, despite huge financial allocation for the welfare programmes,” said Mr. Venu Gopala Krishna.

The Minister also inspected the food being served to students under the Jagananna Gorumudda programme at the government high school here.

The Minister had lunch with the students and enquired about the weekly menu.

Mr. Venu Gopala Krishna also inspected distribution of the ‘Vidya Kanuka’ kits and the works done under the Naadu-Nedu programme.