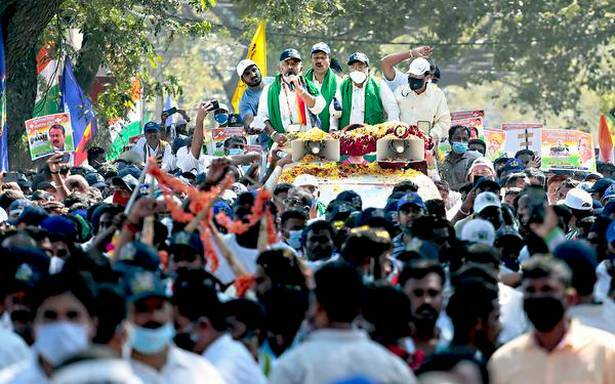 As the Congress padayatra seeking implementation of the Mekedatu drinking water project completed the third day on Tuesday attracting thousands of party workers, the State Government, it is learnt, is still weighing the options before deciding on its approach to handle the situation. While another FIR naming 40 Congress leaders was filed for flouting COVID-19 norms, Health Minister K. Sudhakar on Tuesday threatened legal action against KPCC president D.K. Shivakumar for spreading false information and refusing to cooperate with a government official.

The second FIR filed by Sathanur police comes a day after it filed an FIR against 30, including Mr. Shivakumar and Leader of the Opposition in the Assembly Siddaramaiah. Since the latter did not attend the padayatra owing to ill-health, his name does not figure in the second FIR. The FIR has been filed under provisions of the Karnataka Epidemic Diseases Act, 2020, based on a complaint by the local tahsildar.

Government sources acknowledged that it is worried about the padayatra entering Bengaluru, but it is also unlikely to use force to disperse the crowd. Use of force on workers and leaders could not only lead to a law and order situation but also provide sympathy to the Congress, sources said.

Another source said that the Government was also awaiting the outcome of the public interest litigation (PIL) petition that has been filed in the Karnataka High Court. “If the court takes a stern decision, the Government could crack down on the padayatra citing court orders and Congress leaders will also have to abide by the court decision,” sources said.

When his reaction was sought on the padayatra, Home Minister Araga Jnanendra, who briefed presspersons after the COVID-19 management meeting, said the Government was still thinking about handling the padayatra. “We have told the police not to allow any gathering or protest meetings in view of new COVID-19 rules coming into force.”

Meanwhile, seeking an apology or documentary proof from Mr. Shivakumar for his statements on COVID-19 management in the State, Dr. Sudhakar warned that action would be initiated under the Epidemic Diseases Act, 1897, the Karnataka Epidemic Diseases Act 2020, and IPC for making baseless allegations. “By making false allegations on COVID-19 management, Mr. Shivakumar has been instilling fear that is against law. He has to apologise or provide proof to justify his statements.”

The Health Minister’s statement came in the light of Mr. Shivakumar accusing the Government of fudging COVID-19 case figures to curtail his padayatra and also make money and attempting to declare him as COVID-19 positive, among others.

‘Not scared about FIR’

In Kanakapura, Mr. Siddaramaiah, who joined the padayatra after taking a break on Monday, said the party was not scared about the FIR, and added that it had been filed with a mala fide intention since the padayatra would raise awareness about BJP’s “wrongdoings” in delaying the project. “The BJP is letting down people of Karnataka only to strengthen its position in Tamil Nadu. This padayatra is to prevent it and the BJP is scared about the success of the padayatra.”

On COVID-19 concerns, Mr. Siddaramaiah asked why was such concern not there for several programmes, including Prime Minister Narendra Modi’s election rally that had attracted thousands. “Is there separate law for us and them?” Reacting to Mr. Jnanendra suggesting a lockdown if cases increase, Mr. Siddaramaiah said that Government should first provide financial relief to the vulnerable sections before imposing a lockdown. “The Government has not paid relief announced during the first lockdown,” he claimed.

Refuting allegations that his Government delayed submission of a DPR on the Mekedatu project, Mr. Siddaramaiah claimed that a DPR was prepared in 2013 that estimated a cost of ₹5,912 crore and a revised estimate DPR of ₹9,500 crore was submitted in 2019.