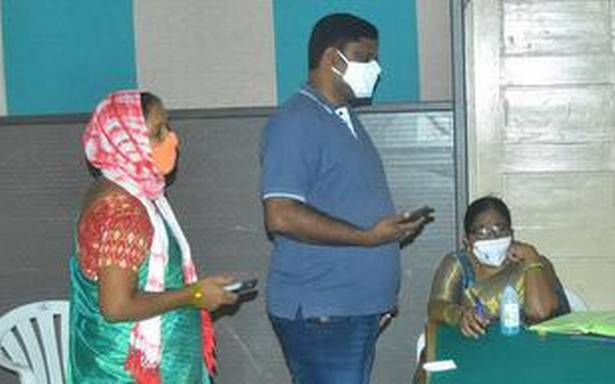 The State government has decided to open vaccination centres at the village level to administer vaccine against COVID-19 as part of efforts to cover the entire population.

The State has an estimated 2.8 crore people aged over 18 years. Around 1.45 crore people have been administered the first dose and another 55 lakh were administered the second dose of the COVID vaccine so far. Panchayat Raj and Rural Development Minister E. Dayakar Rao said though the coronavirus situation was under control in the State, there was a need for officials at the village and mandal levels to actively take part in the special drive to cover the entire population within a specific time-frame.

Accordingly, sarpanches, members of Mandal Parishad Territorial Constituency and Zilla Parishad Territorial Constituency members and other elected representatives should effectively coordinate with officials to ensure vaccination of the entire population. The Minister on Wednesday conducted a video conference with officials concerned on the preparedness for a special drive to be launched from Thursday for vaccination. Chief Secretary Somesh Kumar and other senior officials attended the video conference from the BRKR Bhavan here.

Mr. Dayakar Rao recalled Chief Minister K. Chandrasekhar Rao’s instructions to the Health department to launch special vaccination drive covering at least three lakh people a day. The direction follows the government’s efforts to ensure that the entire population was vaccinated to ensure that there was no scope for spread of the pandemic again.

Priority should be on administering vaccine to those who were yet to take the first dose and steps should simultaneously be initiated to provide second dose to those who were given the first dose. Plans should be formulated for opening vaccination centres at the village level and steps should be taken to ensure effective coordination between the officials concerned. The Minister said the government would award those who worked effectively in the successful conduct of the special drive.

Mr. Somesh Kumar directed officials to review the progress of the special vaccination drive on a daily basis. Control rooms opened at the State and district levels should continue to gather information and disseminate it to the people from time to time. Adequate publicity should be given to the special drive to ensure that people volunteered to get vaccinated.