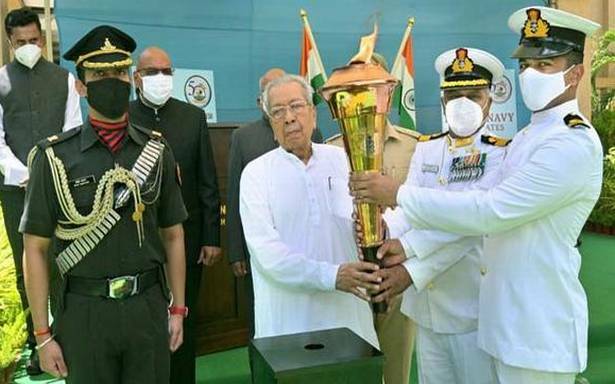 Governor Biswa Bhusan Harichandan received the ‘Victory Flame’ of Swarnim Vijay Varsh, commemorating the 50th anniversary celebrations of India’s victory in the 1971 war, at a function held in Raj Bhavan here on Wednesday.

‘Swarnim Vijay Varsh’ celebrations began with Prime Minister Narendra Modi lighting the Victory Flame on December 16, 2020, from the eternal flame of the National War Memorial in Delhi, signifying the bravery of the soldiers of the war.

The ‘Victory Flame’ was brought by INS Sumitra on behalf of Eastern Naval Command (ENC) from Port Blair to Visakhapatnam and reached here through Rajahmundry on Wednesday. It will be taken to Hyderabad through Nalgonda, from Vijayawada.

Mr. Harichandan said in December 1971, in one of the shortest wars in the history, lasting only for 13 days, the Indian Army secured a decisive and historic victory over Pakistan Army which led to the creation of a new nation ‘Bangladesh’ and the war ended after the Eastern Command of the Pakistan military signed the ‘Instrument of Surrender’ on December 16, 1971 in Dhaka.

“It was a glorious victory that resulted in the largest military surrender post World War-II, in which approximately 93,000 soldiers of the Pakistan Army surrendered to the Indian Army,” the Governor said.