‘Government has a lot to answer for’: 30% of Indigenous NSW community struck down by Covid 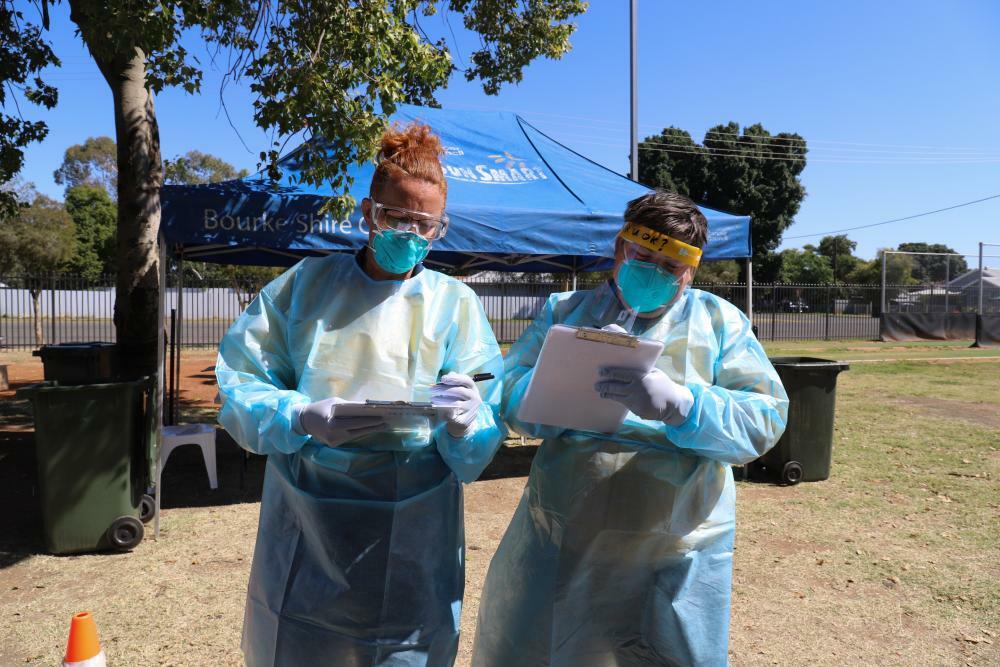 It has been just three weeks since Covid first came to the far north-west New South Wales community of Enngonia.

But already it has claimed the life of a beloved elder and infected 21 – or 30% – of the Indigenous population of the town.

Health workers on the frontline say it is still “not very clear who’s really in charge” and describe the public health response as “chaotic”. They are calling for more help from the NSW government to coordinate the crisis.

Enngonia now has a rate of transmission “much worse than Wilcannia”, where around 15% of the community have the virus, and where there has been a massive public health response over the past week.

“Enngonia is very remote, without on the ground support,” the health service manager for the Bourke Aboriginal Health Service, Claire Williams, says.

“In terms of managing the cases in the community, it’s been a little bit chaotic. While there are regular meetings about what’s going on and what services are available, it’s not very clear who’s really in charge and who we should be going to.

“We’d like it [to be] really clear-cut. Otherwise we’re kind of all just scrambling and doing little bits. Sometimes organisations are doubling up on what work is happening because a community member has called two or three organisations just reaching out trying to get assistance,” Williams says.

Enngonia is mourning the loss of an elder this week, her passing made worse by the fact that she died a long way from home.

The woman in her 70s, whose name has not been used for cultural reasons, was “a great knowledge holder, a great lady,” says Tannia Edwards, the CEO of the Enngonia Murruwari land council.

“It’s so devastating for the families. We’ve lost a beautiful lady. And the way the media puts it – that people have passed away unvaccinated – almost like it was their fault,” Edwards says.

“It’s not people’s fault if they were not vaccinated. Governments should have done a better job at delivering the message.”

Enngonia is 100km north of Bourke, close to the Queensland border. There is no shop. The pub sells basics such as bread, milk, tinned food and toiletries, but people are reliant on groceries coming from Bourke or donated by volunteers.

The community has no hospital and no resident nurse. In an emergency, an ambulance can be summoned from Bourke, where there are already 65 Covid cases including those in hospital.

The Aboriginal medical service is running a vaccination clinic in both towns, delivering medicines and doing rapid testing, on top of its regular services. This is just manageable, Williams says, until staff are taken out of action by exposure to Covid in the community.

“The RFDS has supplied doctors on the ground in Wilcannia. Even if it was just a flight nurse with emergency experience based in Enngonia, who could coordinate the care, but also be there in case of emergency and knows what needs to happen.”

The RFDS says it has helped deliver vaccinations and primary care to the region.

“We will continue to do so in partnership, consulting with the communities as their health and wellbeing needs change, especially during the current times,” RFDS’s general manager, health service, Jenny Beach, says.

A spokesperson for the western NSW local health district says it has begun a “household-by-household assessment” of health and social needs in Enngonia. If people can no longer safely isolate at home, they can go to “special health accommodation in Bourke”, which will be expanded over the coming week.

“The vast majority of patients with Covid-19 do not need hospital care. Should patients need to be hospitalised, the district has the ability to safely transport patients to facilities where they can receive the most appropriate level of care.”

Enngonia elder Patricia Smith says she’s thankful for the food deliveries: “They filled up my cupboard and kept us eating.”

In her household are two little girls, seven and five, who she is home schooling.

She says the lockdown is not so bad – “if we want a bit exercise we go over the river to the red sandhills or walk along the river” – but she is really missing her family in Bourke.

Smith says she is booked to receive her second Pfizer dose on Monday.

“If I can get it done, anybody can. I was really frightened at the start, but I spoke to my doctor and she told me everything about it, and after that I wasn’t concerned.

“The workers have been coming around doing tests and all of that. They give us the app to sign in and get the results. They have been very helpful, I haven’t got any complaints about it. And they don’t have to come out here, they are risking their own lives to do that, to come out and help the community.”

Edwards is worried for family and friends living in Enngonia and angry at the government’s failure to vaccinate people or provide useful health messaging, leaving it up to individuals in the community to do what they can to protect themselves.

“We are 18 months into a pandemic. The vaccinations should have been released out to all our western region a long time ago, but the rush hour is only coming now, when there are already cases in our community,” she says.

Enngonia recorded its first Covid case on 27 August. There have now been 21 cases out of around 70 Indigenous people in the township, which has a census population of 149.

“Imagine how under pressure the [health workers] all are, everyone has to work 24/7 now, trying to see what they can do to stop the spread, get the vaccinations, do the testing, but all of these should have been put in place well before,” Edwards says.

“And the correct information around Covid and AstraZeneca. People are going off what someone’s saying on social media, with all those mixed messages going around the world. And our elders are seeing some of that, or hearing some of that, and it has made people scared to be tested or vaccinated,” she says.

“Government has a lot to answer for, for not getting the correct messages out there. They had 18 months to put something in place of how they were going to deal with it.”