Gouravelli oustees demand payment on a par with Mallannasagar oustees 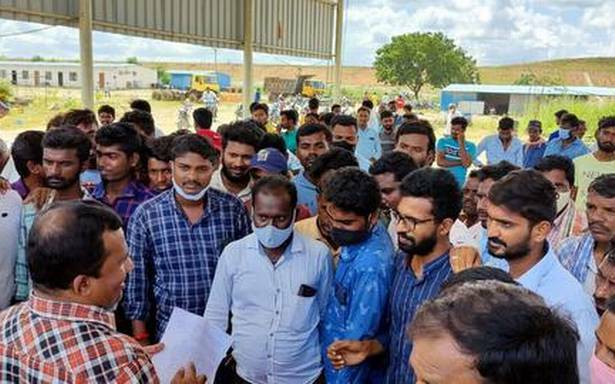 The oustees of Gudatipally village that would submerge under the proposed Gouravelli reservoir made it clear to the officials on Thursday that they must be paid compensation on par with oustees of Mallannasagar who were displaced from villages with a good compensation paid by the government. Further, they said that they would not vacate the village till all payments were cleared.

Some 200 youth from submerging habitations — Gudatipally village and hamlets Banda Tanda, Sevya Naik Tanda, Somaji Tanda, Jalbavi Tanda, Chintal Tanda, Tenugupally and Maddelapally — met Husnabad Revenue Divisional Officer (RDO) M. Jaychandra Reddy and submitted their representation. According to sources the officials expressed their willingness to offer a payment of ₹ 3 lakh to the youth who crossed 18 years as on date instead of ₹ 2 lakh announced in 2016 by Chief Minister K. Chandrasekhar Rao.

The youth rejected the offer and asserted that they must be paid compensation of ₹ 5 lakh plus 250 yards of house site as offered to the youth of Mallannasagar in the past and that there would be no compromise in this regard.

“We will become landless and house-less after losing our lands and vacating our villages. Why should there be discrimination against us when we will also face the same fate like that of other oustees? What is the objection for government to offer same compensation?” the youth present in the meeting reportedly asked the RDO.

However, the officials expressed their inability to offer more, stating that it was beyond their limits and any increase in compensation should be decided at State-level. The meeting ended inconclusively.

As a follow up to the meeting, the officials started conducting a survey of youth beginning Friday. “Chief Minister K. Chandrasekhar Rao in 2016 had announced ₹ 2 lakh compensation for the youth of Yellampally, Midmanair and Gouravelli project oustees. This was not paid so far. Currently the officials have been collecting data in the village by conducting a survey with details of 10th class memo and Aadhaar card. Now the problem is that there are many tribals and members of Budga Jangam community who do not have any education at all. We do not know what their fate will be and how the officials will take a decision in this regard,” village sarpanch Baddam Raji Reddy told The Hindu.