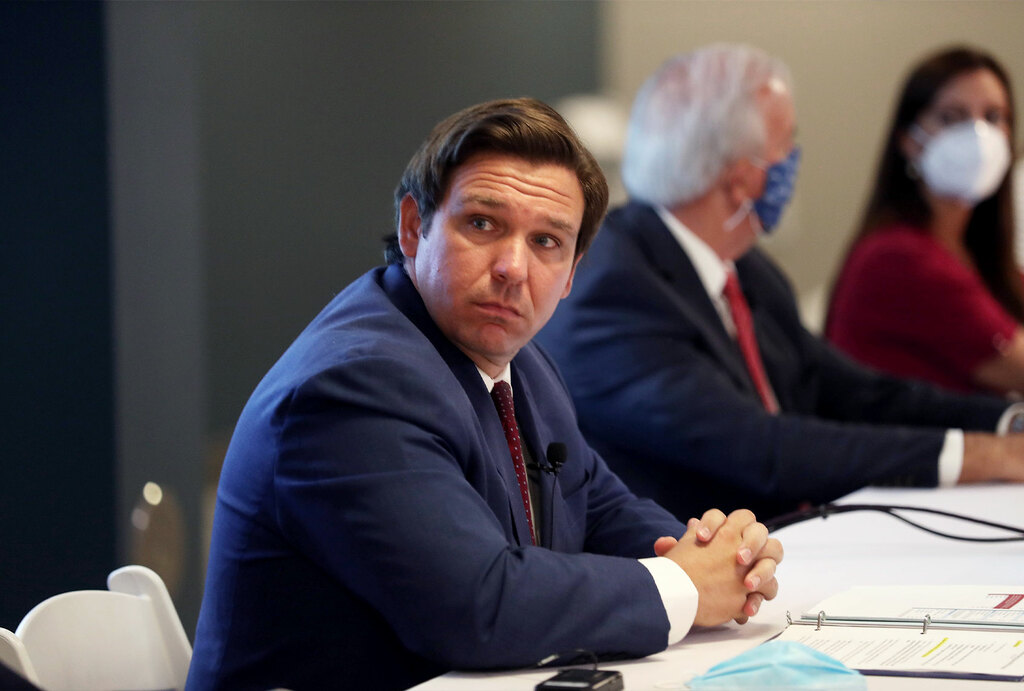 After Republican legislators in 19 states passed 34 laws restricting ballot access in 2021, largely fueled by Donald Trump's election lies, more than a half-dozen more states are gearing up to go even further ahead of this year's midterm elections.

Georgia Republicans, who last year passed a sweeping set of restrictions that Democrats likened to Jim Crow-era laws and led to widespread corporate condemnation and boycotts, have introduced a torrent of new voting bills that go well beyond the limits in last year's legislation. Missouri Republicans have pre-filed multiple bills that would impose stricter voter ID requirements for in-person and mail ballots, after their previous attempts were rejected by courts. At least four states have already pre-filed seven bills that would "initiate or allow illegitimate partisan reviews" of election results, according to the Brennan Center for Justice at the New York University School of Law. Republicans in multiple states have also pre-filed at least seven bills that would restrict access to mail voting.

Even those numbers only scratch the surface. Republicans introduced more than 400 bills with provisions to restrict voting last year. Of those, at least 88 bills in nine states will carry over into the new legislative session, according to the Brennan Center. Democrats have described this onslaught of legislation as an extension of the Capitol riot last January, when Trump supporters hunted lawmakers through the halls of Congress in a failed effort to block the certification of Joe Biden's win.

"There can be no doubt that the events of January 6th were inspired by, and designed to promote, the Big Lie of mass voter fraud, which Donald Trump and the GOP have used to justify racist voter suppression laws in states across the country," Rep. Mondaire Jones, D-N.Y., who was first elected in 2020 and sworn in days before the attack, said in a statement. "It was clear then, and is clear now, that the modern-day Republican Party is more interested in preserving the rule of its authoritarian leadership than in preserving our democracy."

Republicans have defended the nationwide push by claiming it is necessary to ensure "election integrity" and to assuage their constituents' concerns about election security — concerns that have been stoked for more than a year by Trump and his allies. Democrats and voting rights groups argue that many of the restrictions are attempts to suppress votes, especially those of people of color, who have disproportionately backed Democratic candidates. Some of the bills may go even further than that — and could allow Republican-led legislatures to subvert elections.

"The attack on our democracy continues in the form of a victorious nationwide wave of voter suppression and subversion of our electoral systems," Leah Greenberg, the co-executive director of the Indivisible Project, a progressive nonprofit, said in a statement. "Republicans in state legislatures across the country have introduced and passed hundreds of bills to limit participation in democracy — targeting Black and brown voters in particular — and make it easier for partisan officials to remove election officials from their posts and subvert legitimate election results. And every day since, Senate Republicans have blocked federal voting rights and democracy reform legislation that would restore faith in our democratic processes."

Georgia state Sen. Butch Miller, a Republican now running for lieutenant governor, is pushing a bill to ban absentee ballot drop boxes entirely, just months after supporting a provision in the state's exhaustive Senate Bill 202 that already restricted their use. State House Speaker David Ralston has proposed a bill that would move election investigations from the secretary of state's office to the state bureau of investigations. It's the latest in a series of measures aimed at undercutting the power of Secretary of State Brad Raffensperger, a Republican who rejected Trump's attempts to "find" enough votes to help him overturn his Georgia margin of defeat. The GOP last year removed Raffensperger as chair of the State Election Board and banned him from entering any election lawsuit settlements without approval from the legislature.

Another new Republican proposal would restructure the government of Georgia's Gwinnett County, where Biden won by 18 points, and allow the GOP-dominated legislature to pack the Democratic-led county commission with its own appointees. Nicole Hendrickson, the Democratic chairwoman of the county commission, has said the proposal "removes our voice as a board of commissioners and disenfranchises our citizens who did not have a say in any of this."

Florida Republicans, who last year passed a wide-ranging law restricting mail-in voting and drop boxes while empowering partisan poll-watchers, have also unleashed a tide of new proposals ahead of the next election cycle. Gov. Ron DeSantis, a Republican, has called to create a massive new law enforcement unit to investigate voting "irregularities." State lawmakers have introduced proposals to make it a felony for any third party to submit more than two ballots and to increase "maintenance" of voter rolls, which critics argue too often amounts to a "purge" of valid voters, according to the advocacy group Voting Rights Lab.

Republican legislators in five states, including Florida, Tennessee and Oklahoma, have all introduced bills that would launch partisan reviews of the 2020 election, although no recount or "audit" in any state — including those conducted or ordered by Republicans — has found any evidence of significant voter fraud.

A New Hampshire Republican bill would eliminate vote-counting machines and require all ballots to be counted by hand, which Democrats worry could lengthen the time it takes to tally ballots and create an opening for bad actors to challenge the legitimacy of the election. Republicans in the state have also proposed creating stricter residency requirements to vote, which appears to be a continuation of the GOP's aim to restrict voting by college students.

Republican legislators in five states, including Florida, Tennessee, and Oklahoma have all introduced bills that would launch partisan reviews of the 2020 election.

Many of the bills that Republicans have already introduced will also carry over from last year. At least 57 of the 88 carryover bills would restrict mail voting, including limiting the time voters have to apply or deliver a mail ballot, according to the Brennan Center. Seven others would expand voter purges, five would impose criminal penalties for election officials who send out unsolicited mail ballots or people who assist voters in returning their ballots, and 23 others would impose or expand voter ID requirements.

"The Capitol attack was just the beginning of the campaign to overthrow our democracy," Andrea Waters King, president of the progressive think tank Drum Major Institute, said in a statement. "White supremacists failed to steal the presidential election, so now they're trying to steal it in the states. Dozens of voter suppression bills have passed around the country since the insurrection — these attacks on our democracy are less visible but no less insidious. We must fight against these anti-democratic laws as fervently as we condemn the insurrectionists."

Many of the bills were written with the help of deep-pocketed conservative groups. Jessica Anderson, executive director of Heritage Action for America, sister organization to the powerful Heritage Foundation, last year bragged in a leaked video obtained by Mother Jones that in some cases the organization has prodded lawmakers to craft voting restrictions.

"In some cases, we actually draft them for them," she said in the video. "Or we have a sentinel on our behalf give them the model legislation so it has that grassroots, from-the-bottom-up type of vibe."

Anderson recalled that the group was able to "quickly" and "quietly" help Iowa lawmakers draft bills and gather public support for a slew of new voting restrictions.

"Honestly, nobody even noticed," she said. "My team looked at each other and we're like, 'It can't be that easy.'"

Democrats have renewed their push to pass voting rights legislation before this year's midterm elections in response to the new voting restrictions. Senate Majority Leader Chuck Schumer has vowed to hold a vote on changing the chamber's filibuster rules by Martin Luther King Jr. Day if Republicans continue to block the Freedom to Vote Act and the John Lewis Voting Rights Advancement Act. It's unclear whether he can convince Sens. Joe Manchin, D-W.Va., and Kyrsten Sinema, D-Ariz., to support filibuster changes they have long opposed.

"We're running out of time," Schumer warned earlier this week. "What these legislatures have done in 2021 and are now beginning to do in 2022, if you wait much longer, you won't be able to undo them in time for the 2022 elections. Even if the legislation says what they did is wrong, the courts may say it's too close to the primary season, we can't change it. So we have to move quickly."

Read more on the continuing fight for voting rights: