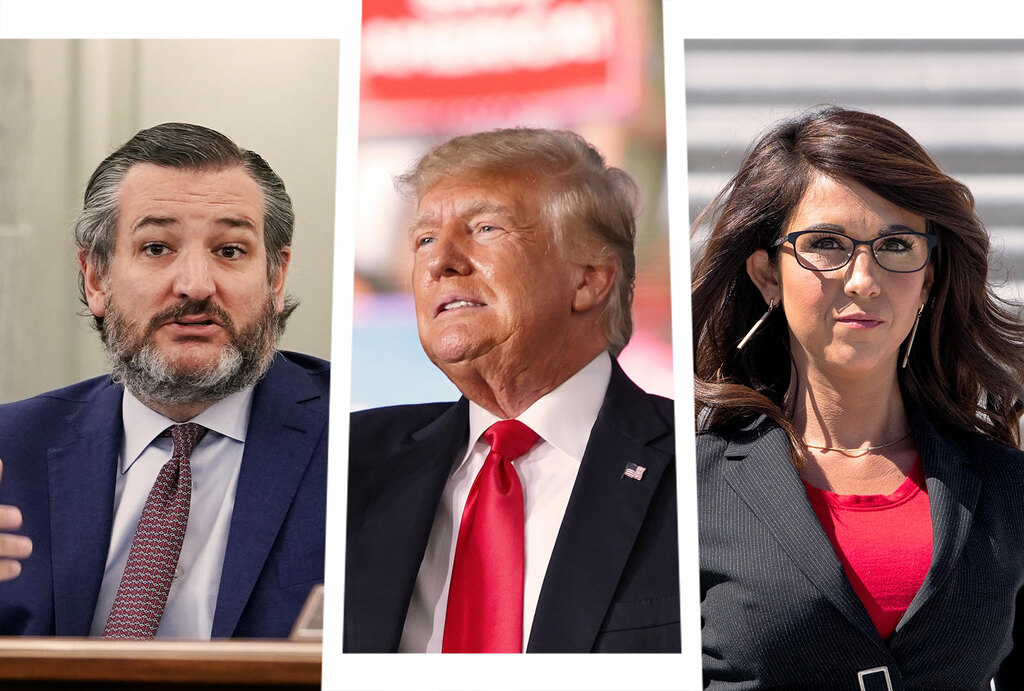 Former President Trump and several right-wing Republican lawmakers claimed over the holiday weekend that hundreds of canceled and delayed Southwest Airlines flights resulted from pilots and other airline employees resisting vaccine mandates. But the airline, the pilots union and the FAA have all said that Southwest's vaccine requirements had nothing to do with this weekend's issues.

Southwest canceled more than 2,000 flights between Saturday and Monday and at least 1,400 other flights were delayed. The airline blamed severe weather, air traffic control staff shortages and a lack of hotel accommodations for employees for creating a cascading series of issues that led to inadequate staffing on more than one-fourth of Southwest's weekend flights. The union representing Southwest pilots blamed the airline's complicated technological system, which reassigns and reroutes pilots during disruptions, for causing a "domino effect" that forced the company to reassign more than 70% of its pilots over the weekend. Southwest saw a similar string of cancellations in June, which the airline later blamed on overly optimistic projections about how quickly it could scale up flights as passengers began to return over the summer.

This weekend's cancellations came just two days after the Southwest pilots' union asked a federal judge to block the company's vaccine mandate. Republican lawmakers, without evidence, quickly seized on an imaginary link, tying the travel chaos to the company's new policy and President Biden's call for a federal vaccine mandate.

Rep. Lauren Boebert, R-Colo., claimed that Southwest employees were "standing up for their rights as Americans."

"You will NEVER be able to comply your way out of tyranny," she tweeted.

Rep. Andy Biggs, R-Ariz., said he stands with Southwest employees who are "fighting against these mandates."

"This isn't about a vaccine, this is about freedom," he wrote.

Donald Trump also sought to link the issues to vaccine mandates, as well as his endlessly repeated false claims about the 2020 election.

Donald Trump Jr., also amplified the baseless claim on Twitter, claiming that employees had gone on "strike" over the mandates.

Fox News host Tucker Carlson amplified these unfounded claims to his primetime audience, saying that the flight cancellations were the "direct consequence" of Biden's vaccine mandate.

But there's no evidence of a strike or sick-out by airline employees. The pilots' union has said that pilots called in sick at a normal rate over the weekend.

Kelly said that the rate of employee absences over the weekend was "very normal."

"Understand how airlines work," he said. "When you get behind, it just takes several days to catch up."

The Southwest Airlines Pilots Association said on Saturday that "our pilots are not participating in any official or unofficial action."

"There are false claims of job actions by Southwest Pilots currently gaining traction on social media and making their way into mainstream news. I can say with certainty that there are no work slowdowns or sickouts either related to the recent mandatory vaccine mandate or otherwise," union president Casey Murray said in a statement on Sunday, pointing instead to severe weather in the southeast United States, staffing shortages and the company's operating system, which he said has become "subject to massive failures under the slightest pressure."

The union said last week that it does not oppose vaccines but filed a lawsuit to block the mandate because Southwest had not consulted employees before making the decision.

Murray told the Dallas Morning News that pilot sick rates over the weekend "were exactly in line with where they were all summer with the same kind of operational disasters."

Southwest COO Mike Van de Ven said in a video to employees that despite "a very aggressive hiring plan ... we are still not where we want to be with staffing," especially pilots.

Industry experts blamed the company's "point-to-point route network" for making the airline more susceptible to widespread issues than other airlines. Delays cause cascading issues at each flight's additional stops and the airline had scheduled more flights than it could handle, Henry Harteveldt, president of the Atmosphere Research Group, told NBC News.

"You screw up Florida, you screw up their whole network a whole lot more because it's connected to the rest of their system. Once it gets screwed up, airplanes are out of place, crews are out of place," added Mike Boyd, an aviation consultant at Boyd Group International. "The crew gets stuck in Omaha and ran out of time, they should be in Orlando. Getting that squared away takes time."

Cruz ignored all of the contradictory evidence and statements from the airline, the pilots and the FAA — which also said there is no evidence that "this weekend's cancellations were related to vaccine mandates" — to accuse the media of Democratic propaganda when his baseless claim was widely fact-checked. He then claimed he had not meant Southwest employees but was referring to air traffic controllers in Jacksonville, where local aviation authorities reported staffing issues over the weekend.

But the statement he posted explicitly refuted the "rumor" that it was impacted by an "organized walkout late Friday by controllers in response to the FAA's mandate that all employees get vaccinated." Instead, it blamed staffing issues on "normal approved leave" and controllers who are required to stay at home for 48 hours after getting vaccinated.

"If you believe the pilots unions, MANY MORE FLIGHT CANCELLATIONS ARE COMING (and not just SWA) because of Biden's illegal vaccine mandate," Cruz wrote.

Nearly all major airlines have now required employees to be vaccinated without encountering the same problems as Southwest, where the issues have persisted for more than four years, according to the pilots' union. While Republicans continue to attack Biden for urging vaccine requirements, most voters support such mandates and data shows that compliance rates have been exceptionally high.

United Airlines, the first airline to require vaccines for employees at a time when its overall vaccination rate was below 70% in August, says that all but about 300 of the company's 67,000 employees have been vaccinated or granted exemptions, a rate of more than 99.5%.

"I did not appreciate the intensity of support for a vaccine mandate that existed, because you hear that loud anti-vax voice a lot more than you hear the people that want it," United CEO Scott Kirby told The New York Times. "But there are more of them. And they're just as intense."