Employees at Google based in the same office could see differences in pay following the pandemic, with those choosing to continue working from home on a permanent basis losing out on pay.

In an experiment taking place across Silicon Valley, including at companies like Facebook and Twitter, employers are cutting pay for those who move farther away to cheaper areas, Reuters reported.

Smaller entities like Reddit and Zillow have instead started to use pay models that are unrelated to where employees live because of advantages in hiring, retention, and diversity.

Google sticks out from the crowd by providing employees with a pay calculator that shows them the possible effects on their salaries before they choose to relocate.

But in reality, this new model could lead to some remote employees, specifically those with long commutes, having their pay cut without ever moving at all.

“Our compensation packages have always been determined by location, and we always pay at the top of the local market based on where an employee works from,” a spokesperson for the company told Reuters, saying that salaries will be different between cities and states.

Google’s Work Location Tool was launched in June. One anonymous employee, who usually commutes to the office in Seattle from a nearby county, shared with Reuters that they would probably lose 10 per cent of their paycheck by working from home full time.

The employee was thinking about working remotely permanently but decided to stick with their two-hour commute because of the pay cut.

“It’s as high of a pay cut as I got for my most recent promotion. I didn’t do all that hard work to get promoted to then take a pay cut,” they told the news agency.

Sociology professor Jake Rosenfeld at Washington University in St Louis told Reuters: “What’s clear is that Google doesn’t have to do this. Google has paid these workers at 100 per cent of their prior wage, by definition. So it’s not like they can’t afford to pay their workers who choose to work remotely the same that they are used to receiving.”

Screenshots from the company’s internal salary calculator show that a Google employee living in Stamford, Connecticut – an hour from New York City by train – would see a 15 per cent pay cut if they started to work from home full time. A worker living in the city who also started working from home permanently wouldn’t see a cut at all.

Areas around Seattle, Boston, and San Francisco, showed differences of five and 10 per cent.

Google employees have told the news agency that they could see pay cuts of as much as 25 per cent if they moved from San Francisco to an almost as pricey area in California like Lake Tahoe.

The calculator uses US Census Bureau metropolitan statistical areas, meaning that places like Stamford are not in New York City’s statistical area, despite that many who live there work in the city.

A spokesperson for the company said the salary of an employee wouldn’t change if they went from being in the office to working from home in the city where the office is situated. This means that those working from Google’s office in New York City would be paid the same as remote workers living in the Big Apple. 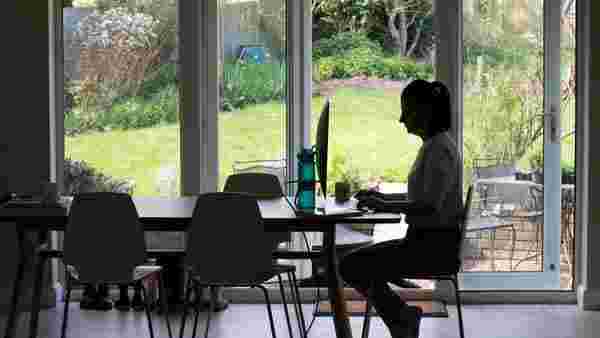 Google employees who work from home may suffer pay cut
It is an experiment taking place across Silicon Valley, which often sets trends for other large employers

The long-distance commuters are hit harder as Google says that the employees' compensation packages are always been determined by location.