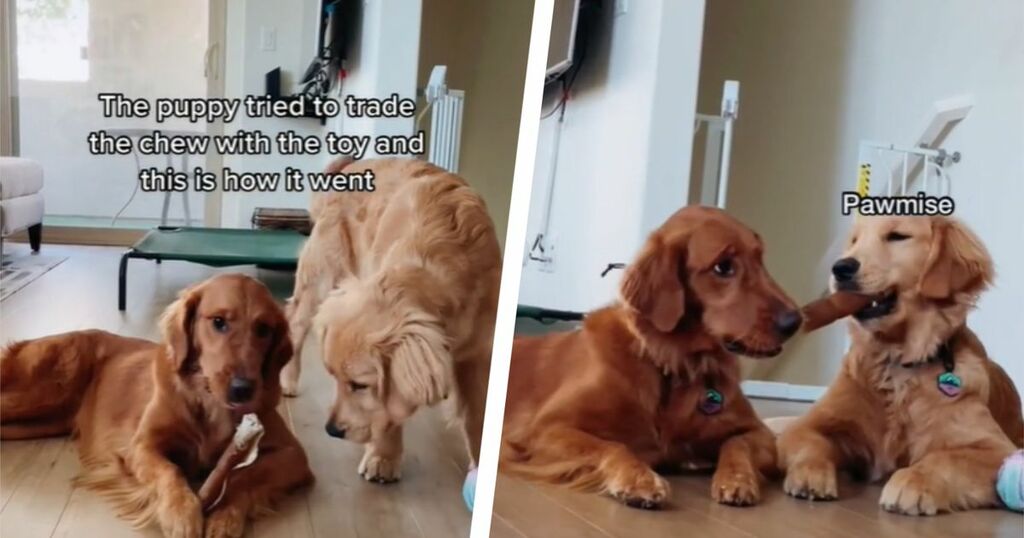 Younger siblings can be annoying, from stealing your favourite T-shirt, to arguing over the TV remote.

And such spats even extend to the dog world, as two golden retriever brothers have demonstrated.

Social media stars Gamja and Chip, from Orange County, California, US, have been caught in a brotherly bicker over bully sticks - and their ‘argument’ is hilarious.

In the clip, the overlaying text mimics a conversation between the goldens, with Chip sneaking up behind Gamja - who’s name means potato in Korean - and asking ‘wanna trades?’

Gamja does not want to share his chew, and shows his baby brother his teeth in a bid to warn him off.

Their owner told viewers that Chip had his own bully stick, but had finished it first.

The puppy offers to ‘hold’ the stick for Gamja for safe keeping - but the older and wiser golden knew his game.

Older siblings tend to write the book of tricks, after all.

The argument results in a game of tug of war with the chew, sharing the treat between them.

Golden retrievers have proven to be one of the most popular breeds on the video sharing app, racking up 14 billion views.

The lovable gundogs are well known for being intelligent and affectionate family dogs, described as ‘kindly, friendly and confident’ by The Kennel Club.

One viral video saw Phi Phi the retriever ‘spying’ on her next door neighbour, Samoyed Bentley.

The nosy pup found a peep hole in their garden fence, and loved watching what her ‘bestie’ was doing on the other side of the border.

One follower even joked the spy dog could be the next James Bond, writing: “I can’t wait to see more of James Bond the dog, haha #spydog.”

Another retriever, named Barney, can’t go a single day without kissing his girlfriend on his walk.

In a gorgeous Tiktok video, Barney can be seen running over to the wall where he hops up to give his best friend kisses.

The video has been viewed more than 45,000 times, with Barney and his lady-friend's fans all calling for the two dogs to go on a date together.