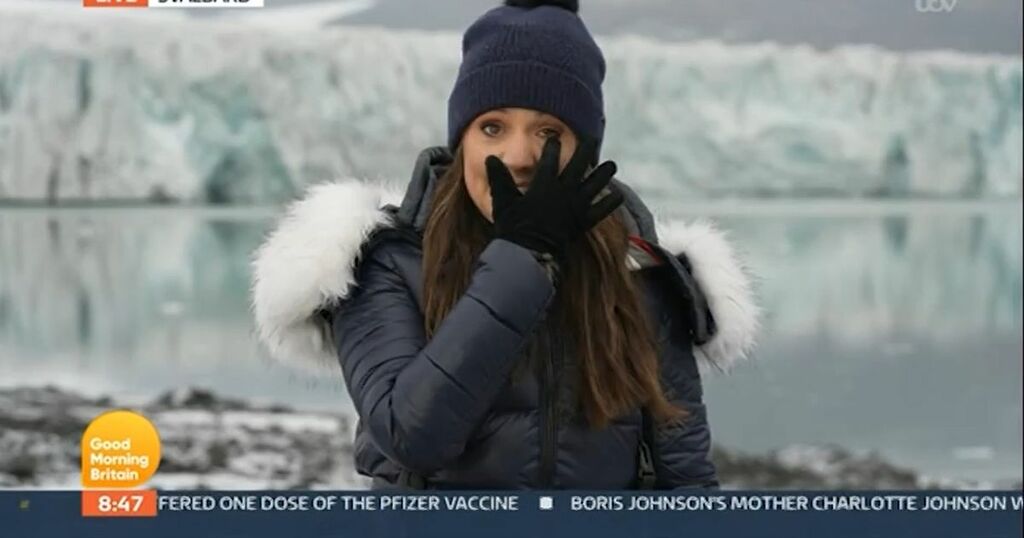 Laura Tobin broke down in tears live on Good Morning Britain as she continued her report from the Arctic Circle.

The weather presenter was first seen in Svalbard - which is halfway between Norway and the North Pole - on Monday's show.

Laura, 39, is there to highlight the alarming impact that climate change was having in the Artic and the repercussions that is having.

The GMB star became emotional on her last report of Tuesday's show as she discussed why she made the trip in the first place.

Speaking through tears, Laura said; "I came here... I've been away from Charlotte [her daughter] for six days and my producer Ruth hasn't seen her daughter - she's never had a night away from her - and I wanted to come and tell the story of the people here.

"My little Charlotte drew this picture of a polar bear and she asked me to give it to the polar - I'm obviously not because that that is very dangerous," Laura managed to add with a bit a laugh.

"But if I were to come here when she's my age there potentially won't be polar beats in Svalbard and we were talking about what we can do, just understanding the reality and everyone making a difference and everyone working together and not pointing fingers will help."

She finished by saying: "I hope you've enjoyed what we've done because we've loved it even though I'm crying."

Returning to Susanna Reid and Richard Madeley in the GMB studio, the hosts asked if she was alright before Susanna said; "Laura, you said earlier that sometimes people go to that particular location for a few days and end up staying years because they're so compelled by what they see and what they need to do...

"I know that Charlotte means you're going to be back otherwise we'd be at risk of you staying there."

Laura laughed and explained that her little girl understands why her mum has gone away.

"I want to let her know we have done everything we could to make this landscape stay the same for her."

But GMB viewers were left questioning why Laura had to fly to the Arctic for her report.

However, an ITV spokesperson said: "All flights booked as part of Good Morning Britain's trip to the Arctic were carbon offset. The Norwegian Polar Institute worked very closely with GMB on the trip, as they were keen to demonstrate what impact global warming is having in the region."