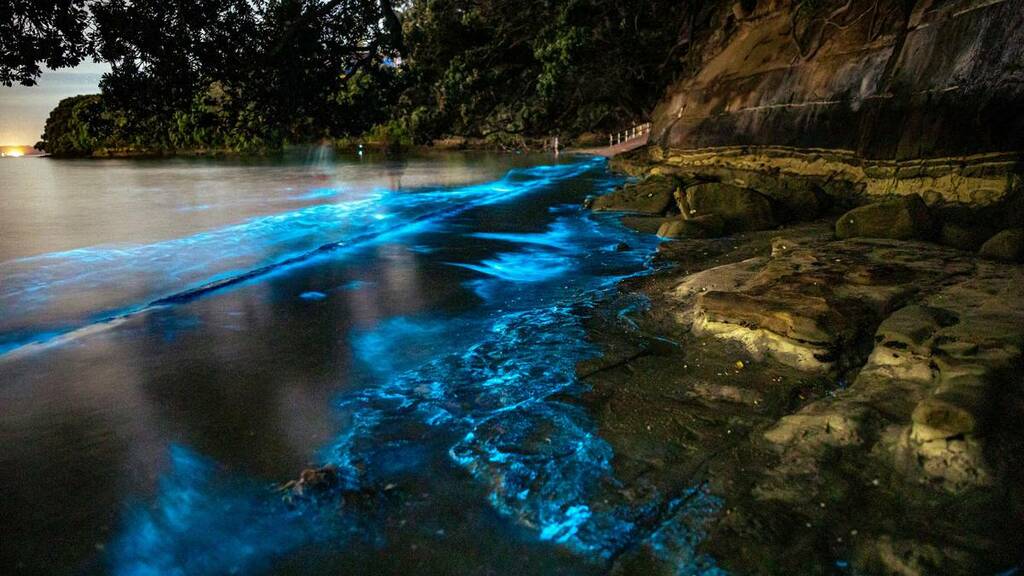 The glowing waters around Auckland are a spectacular and elusive sight.

It's hard to believe the 'Aurora of the Sea' exists until you've viewed the blue lights of the phytoplankton, lapping on the shores after dark.

Fortunately a pair of photographers have made a guide to help you see the phenomenon in the waters around Tamaki Makaurau.

Grant Birley and Matthew Davison have been working for the past two years on a way to find the microscopic animals which cause the glow, after dark. While it's difficult to reliably do, they have some helpful pointers for phytoplankton hunters.

On Sunday night they used it to track down a display at Manly Bay, Northshore.

"We heard so many people say it's the first time they've seen it," said Grant.

While normally he says it is important to manage expectations and that displays are more vibrant through the use of photography, Sunday's show was particularly bright.

This was helped by bystanders who splashed about in the water, aiding the glow which is triggered by movement.

"It was clearly visible to the naked eye which made for a great spectacle," he said.

His ten-year-old son, who was bathing in the water, posed for the camera.

"Every time he stood out of the water his clothes would sparkle brightest blue - even his face and hair."

The best show was between 23:00 and continued well past midnight.

Bathers returning on Monday night were disappointed to discover the phytoplankton were gone.

"After a display like this you would expect the same the following night but, as is often the case with this stuff, it was gone."

How and where to find bioluminescence in Auckland

Having first seen the phenomenon in January 2020, Grant says he wanted to come up with a more reliable way to track down the algal glow.

"It's a rather unpredictable and very fickle thing to find, and even more so to photograph," says Grant.

Even so, there are some tricks both he and Matthew have learned.

Some of the strongest sightings are seen during hot evenings, following rain.

While it's not good for water quality and swimming, the plankton bloom after downpours.

"Surface runoff from the land after rain has something to do with it along with the following heat," said Grant.

Although Auckland hadn't experienced much rain recently, he said this weekend's show had more to do with tides and hot water temperatures.

Increasing temperatures and ambient light have an effect on sightings.

"The less light the better," so moonless nights are perfect.

Unusually warm waters and stable seas, such as the current marine heat wave affecting New Zealand, are prime conditions for seeing the glow.

However, displays have been known to be seen all year round.

"I've come across it in July albeit not very often," he says.

"When the next concentrated bloom heads our way, I hope to spot it and provide some advance warning and enable more people to witness the blue gold," Matthew writes.

NIWA reports into rising sea temperatures and phytoplankton have already mapped the phenomenon over prevailing temperatures, with Auckland and the Hauraki Gulf being a particular hot spot for sightings.

Although the phenomenon can be seen across the country.

The displays can be triggered at any time after dark, so patience and realistic expectations are vital.

"Unless you're very lucky the visual experience will be a lot more muted than a photographic one," he says.

The glow is the plankton's defence mechanism and will only be triggered by movement, so unless there is some current, fish or people in the water - you might never know it was there.

However even a dull flicker of light in the water tends to excite photographers and nature watchers, which is why Grant and Matthew began their guide to glowing waters.