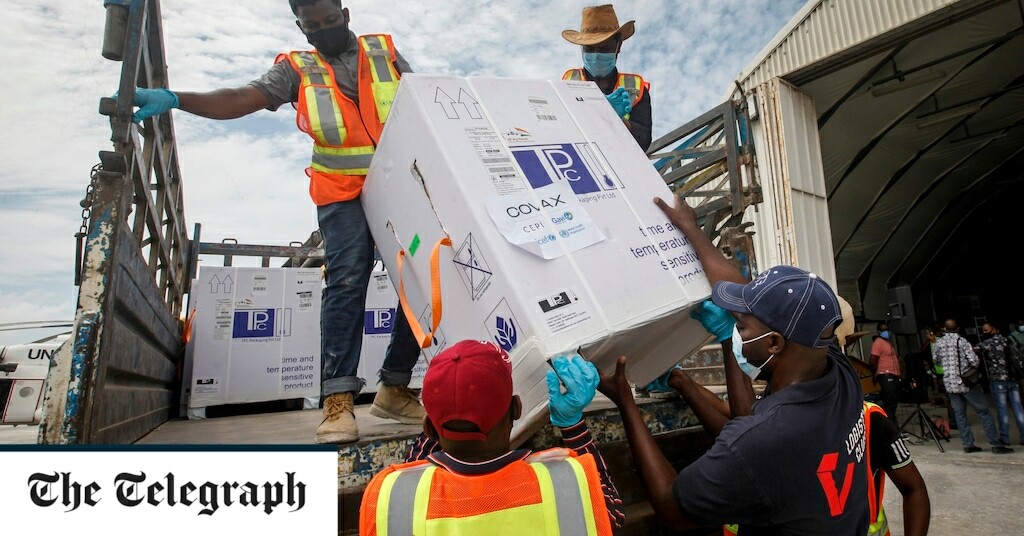 Covax has downgraded vaccine supply forecasts for 2021 by 25 per cent, as global export bans, bumpy production and slower than expected regulatory approval take a toll on the scheme.

The initiative, established last summer to ensure vaccines reach every corner of the globe, announced on Wednesday that it expects to have access to 1.4 billion doses before the end of the year – a substantial fall from the 1.9 billion projected in June.

But despite the reduction, Covax said it will still hit targets to vaccinate 20 per cent of people in the 92 countries which can access shots for free through the scheme, with the exception of India.

This should be more than enough to protect healthcare workers and the most vulnerable populations, given the age profile of target nations.

At a briefing on Wednesday the groups behind Covax – Gavi, the Vaccine Alliance, the World Health Organization (WHO), the Coalition for Epidemic Preparedness Innovations (Cepi) and Unicef – said the supply setbacks were disappointing but not catastrophic.

“This is already the largest rollout of vaccines in history,” said Dr Seth Berkley, chief executive of Gavi. “When we compare this to the last pandemic in 2009, it’s been faster already.

“So are we happy, are we content at the slower results? Absolutely not. But we are in the process of accelerating. If we delay a month or two, that certainly doesn’t move from success to failure, it means we have to try harder and get others to help us.”

To date, roughly 243 million doses have been delivered to 139 countries through Covax. Forecasts always suggested that there would be a major surge in available supply in the latter phase of 2021, as production capacity ramped up.

But the scheme has been hit by a flurry of factors outside its control which triggered the revised supply forecasts, Covax said in a statement on Wednesday.

Chief among them are vaccine export bans, especially from India. The Serum Institute of India had been set to produce the bulk Covax’s supply of Oxford-AstraZeneca vaccines, but the government prevented exports as it was hit by a brutal new wave of Covid infections – restrictions that look set to remain in place until the new year.

There have also been challenges scaling up production at sites earmarked to produce both AstraZeneca and Johnson & Johnson vaccines for Covax, while other shots produced by Novavax and Clover Biopharmaceuticals have delayed filing for regulatory approval.

“This is, of course, bad for the whole world as we’ve seen the dreadful consequences that take hold when the virus is left to roam unchecked,” said Dr Berkley, adding that disparities in access remain stark. While 80 per cent of people in higher income countries have had at least one shot, this figure falls to one fifth in lower income nations.

But Dr Berkley added that gaps in supply could be closed if wealthy countries that have already vaccinated a large number of their populations either donate surplus doses, or swap places with Covax where they are ahead of the scheme in manufacturer queues.

Recent research has suggested that "vaccinating the world" will increasingly become an issue of distribution rather than supply.

Analytics firm Airfinity this week estimated that there will be 11.3 billion doses available before the new year – enough to vaccinate 80 per cent of the global population. Meanwhile wealthy nations are forecast to have a surplus of 1.2 billion shots by the end of 2021.

Dr Berkley said more needed to be done to ensure available supply reaches vulnerable populations. And he urged both manufacturers and donors to be more transparent about when shots will arrive for Covax, or millions of doses could go to waste.

“Systematising donations is important, as currently we don’t have enough visibility on when and what volumes are coming through,” he said. “This makes it very difficult to work with countries to plan for successful delivery, which [increases the] risk of wastage.”

Dr Richard Hatchett, head of Cepi, added that the certainty of future supply means governments should currently prioritise global rollout, rather than booster shots – especially as the evidence for a third dose is inconclusive. The UK is set to make a decision around whether to launch a booster programme this week.

“Doses that are shared now save more lives than doses that become available in six months,” Dr Hatchett said. “Even if the science shows that boosters provide value, the value per dose delivered will be greatest if we deliver primary vaccinations to high risk populations that are unvaccinated.”

Hold off booster shots until 2022, says WHO

Meanwhile at a separate briefing on Wednesday Dr Tedros Adhanom Ghebreyesus, head of the WHO, urged rich countries with large supplies of coronavirus vaccines to refrain from offering booster shots up until the end of the year.

He said that while third doses may be necessary for a small number of immuno-compromised individuals where there was evidence of waning immunity, the WHO does not “want to see widespread use of boosters for healthy people who are fully vaccinated”.

Dr Tedros also said he was “appalled” at comments by the International Federation of Pharmaceutical Manufacturers and Associations, who said vaccine supplies are high enough to allow for both booster shots and vaccinations in countries in dire need of jabs but facing shortages.

“I will not stay silent when companies and countries that control the global supply of vaccines think the world's poor should be satisfied with leftovers," he told a news conference.

“Manufacturers and high income countries have long had the capacity to not only vaccinate their own priority groups, but to simultaneously support the vaccination of those same groups in all countries.

“We have been calling for vaccine equity from the beginning, not after the richest countries have been taken care of,” he said.