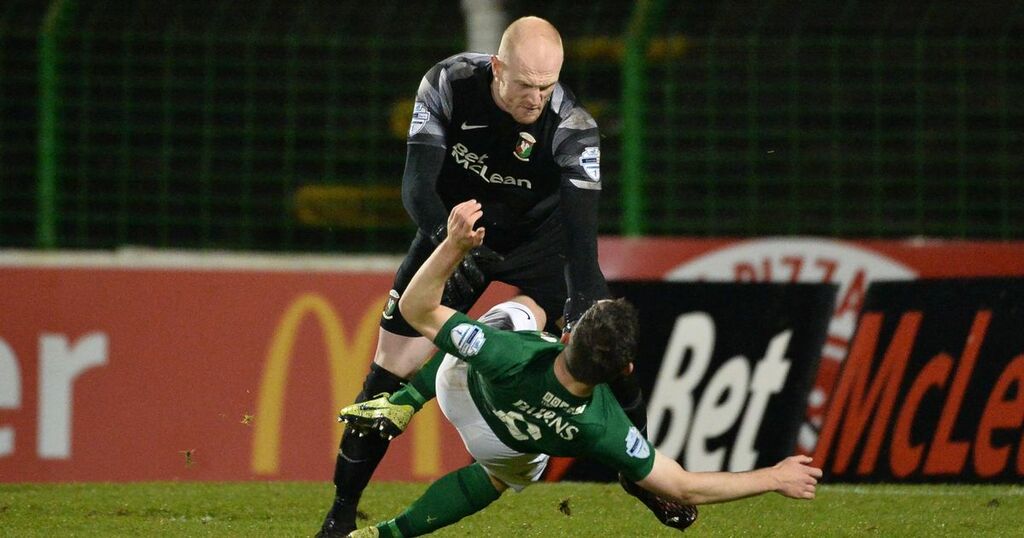 Aaron McCarey has thanked everyone who supported him after his high-profile red card in October’s 2-2 draw with Coleraine at the BetMcLean Oval.

The Glentoran goalkeeper, who served a five match ban for lashing out at teammate Bobby Burns, also said everyone learns from what he called “mistakes/bad decisions”.

McCarey returned to action at the weekend and was photographed with Burns celebrating the East Belfast club’s 1-0 win over Crusaders at Seaview.

On twitter, the 29-year-old said: “In life we make mistakes/bad decisions. When we are wrong, hold your hands up, accept the consequences and learn from it.

“Great feeling to be back out there. Thanks to everyone that supported me over this past month. You all know who you are.”

McCarey served an automatic three game ban for his actions following Coleraine’s late equaliser in a 2-2 draw with Coleraine on October 16.

And he was handed an additional two-game ban after an IFA hearing found him guilty of bringing the game into disrepute.

McCarey missed recent league games against Ballymena United, Larne, Carrick Rangers and Portadown and a 2-0 defeat to Coleraine in the quarter-finals of the BetMcLean League Cup.

The former Cliftonville and Ross County keeper was named Glentoran's man of the match for his performance against the Crues.

Saturday's 1-0 victory, courtesy of Hrvoje Plum's first goal of the season, moved the Ovalman to within five points of leaders Cliftonville who suffered a 1-0 defeat at Linfield.