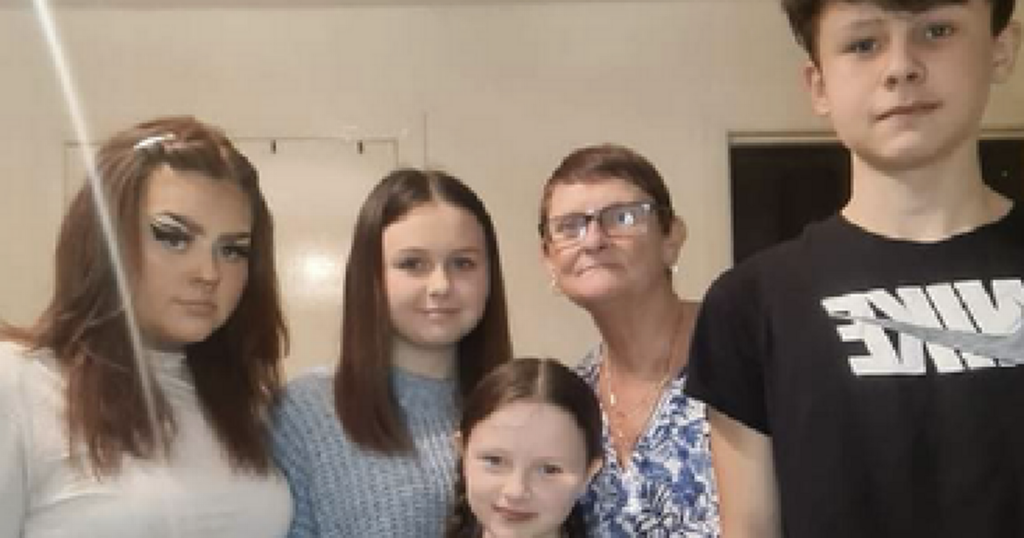 A Glasgow gran has been left 'running out of hope' after five years trying to raise four grandchildren in a tiny two bedroom house.

Susan Cotter is bringing up her grandkids in the cramped Drumchapel property after her daughter Charlene developed a drug problem and passed away earlier this year.

The 57-year-old as been forced to sleep on a single bed in the living room of her home, with her 14-year-old grandson on the floor, reports Glasgow Live.

The loving granny has tried in vain to get a bigger house to take the pressure off the family, but she's received little more than sympathy from authorities.

She explained: "I’m quite a quiet woman and don’t make a fuss about things, but I’ve had no support for myself or these children. There’s nobody helping me, all I get is sympathy but nothing actually done about it."

Susan has kinship care of Jessica, Taylor, Kyle and Millie and with Christmas approaching she faces another year of being unable offer them much needed festive joy.

She approached Glasgow Live desperate for help after appeals to housing officials, her MP, Glasgow City Council and even the children's social worker failed.

She added: "I haven’t been able to buy anything for Christmas for the last couple years, apart from anything else, there’s just no space in this house. It’s really getting to me.

'We have just been left to cope on our own. Where is the care for vulnerable children?

"Every year is the same and I’m running out of hope.

"I’ve got a lot of physical problems as well. I am under the shielding category and the children have missed so much school time and had no help with catching up.

"I’ve wondered how long I can keep my spirits up.

"The children have a social worker, but it doesn’t seem to help, it’s only sympathy. I need practical help.

"It just goes on and on. I’m angry and I’m frustrated."

We contacted Susan's local councillor Malcolm Balfour who was unaware of her plight and horrified to learn she'd been offered little help.

He has since met with her to see what can be done, but is outraged at the lack of apparent support she's received so far.

He pointed out: "Susan is doing a brilliant job raising the children in really difficult circumstances, but it hasn't been easy for any of them.

"It would be so easy for them to fall into the same trap as their mum and they're working really hard to stop that from happening.

"One of the girls is studying for her Highers, she wants to go to university to train to be a midwife, she's a clever and ambitious girl with dreams. It was suggested that she get a place of her own, can you imagine what that would do to that girl, she'd never get the chance to fulfil that dream.

"This family has been through enough, they need practical support, not kind words."

Councillor Balfour says he's discussed Susan's situation with her landlord, Drumchapel Housing Co-operative, and was stunned to learn they can't help because their biggest properties only have three bedrooms.

He went on: "It's just unbelievable, her family is too big for the biggest house they have, so she's expected just to say in a smaller one. They tell me there are legal reasons for this, but it is just unacceptable.

"I'll speak to other housing associations in the area and to one of the council lawyers to see what can be done to help Susan and the children.

"This family needs and deserves our support and they're just not getting it, it's not good enough."