When Prof Gavin Brown, pro vice-chancellor at Liverpool University, first made contact with academics at Sumy State University (SSU) in north-eastern Ukraine a few weeks ago, he did not expect to come off the call and start ordering new windows.

One of SSU’s main buildings had been destroyed in a Russian bomb attack. Among the university’s many immediate needs, it had to replace 110 windows – but managers could not source glass in war-torn Ukraine. Brown told them to send him the measurements.

Liverpool is one of 44 British universities that have signed up in recent weeks to “twin” with a struggling Ukrainian university. UK academics say the weekly Zoom meetings, slotted in around air raid sirens, with female staff who have fled calling in from across Europe, are “humbling” and “emotional”. The idea is to make sure that when the war with Russia ends, Ukraine’s universities will still exist, so their staff and students can help rebuild the battered country.

Fortunately, Liverpool University happens to have its own building company with connections to glass manufacturers, and Brown has heard that supplies like this are making it across Ukraine. “This is about understanding what these universities need and offering real, practical help,” he says.

The challenges do not stop here. “Many female staff have left and are trying to do what work they can from a distance. Many male staff are fighting,” Brown says. Universities at the sharp end of the invasion in eastern Ukraine believe all their female students have fled the region, with many leaving the country. But the universities do not want to lose them.

Liverpool plans to share online teaching materials to keep SSU students engaged. The university may also take in some of the staff, helping them to put lectures and lab experiments online for their colleagues at home. Brown emphasises his university will be a temporary base and when the time is right, the staff will return. “It is clearly a fear of the Ukrainian universities that there will be a brain drain,” he says.

Liverpool, unlike some western universities, has deliberately not offered scholarships to fleeing Ukrainian students who may want to transfer. Brown says that if recipients decide not to go back this would do significant harm. “The whole point of what we are doing is to try to support Sumy students to continue to study with their own university,” he says. “They will be critical in helping with the rebuilding of Ukraine.”

Kyiv National University of Technologies and Design has told its new twin, Sheffield Hallam University, that the main help needed is with motivating their displaced students to study again.

James Richardson, director of global development and partnerships at Sheffield Hallam, says this is no small task as students fleeing the war will have more immediate priorities than resuming their course. And, crucially, the university does not know where most of them are. “We understand pretty much all of their female staff have left Kyiv or have left Ukraine altogether. This has resulted in them having no functional administration,” he says.

In Kyiv, air raid sirens go off every day and night. Richardson’s main contact at the Ukrainian university has to schedule meetings around when he is next on patrol. “I know staff who are still there are cold,” Richardson says. “The first call we had, they said it was -3C at night and they are in unheated cellars. From outside we might think things are quieter in Kyiv, but they feel very much under attack.”

The two universities have many overlapping courses, and Sheffield Hallam wants to share resources such as online lectures, recorded during the pandemic. Many of the Ukrainian students speak English, so language will not be a significant barrier. “The biggest challenge is going to be connecting with the students to tell them about it,” he says.

Richardson hopes to bring staff and students at both universities together on virtual projects in the autumn. However, he says: “Right now they aren’t really functioning so it will be hard to offer much other than our support. But we are in this for the long term, planning for next year and a long way beyond.”

Their last Zoom call, which 12 Ukrainian academics joined from across Ukraine and Europe, was “emotional”. Richardson says: “I think it meant a lot to them to know there is another institution that is simply there for them.”

“This is about giving them hope,” he adds. “It is a reminder that they are fighting for something important. Universities are a huge part of their social and cultural fabric, as well as their economic future.”

Charles Cormack, founder of Cormack Consultancy Group, which is running the twinning scheme alongside the vice-chancellors’ group Universities UK, says what UK universities are doing is listening to what their Ukrainian colleagues need. “At the meetings I’ve been involved in you just don’t hear the word ‘no’.”

York University has twinned with Karazin Kharkiv National University, one of Ukraine’s most prestigious institutions, whose buildings are in ruins from shelling. Prof Saul Tendler, deputy vice-chancellor at York, says one of the Ukrainian university’s many worries is protecting its libraries and archive collections. “They tell us they are in damp basements now and that’s not great,” he says. “If they can get them out of the country, we will hold them in our repositories.”

Like other universities, York is exploring offering summer schools for Ukrainian students, either in the city or virtually. Karazin also wants York to run summer sessions for its staff on moving teaching online, likely to be necessary for some time given the condition of the university’s buildings.

However, even communicating can be a challenge. Tendler says: “They are enduring unbelievable suffering, spending large parts of their lives in bomb shelters.”

Karazin’s leaders have said the collaboration must be “one good deed at a time”, because of the stresses they are under. As Tendler says: “You’d love to be able to wrap your arms around them and do lots of things very fast, but actually right now they can’t cope with that.”

Glasgow University has been asked by its twin, the National University of Kyiv-Mohyla Academy, to provide up to 100 places for female students across a range of disciplines to study at Glasgow for the first semester next year. The Scottish university plans to waive all fees and is exploring what accommodation and extra financial support it can offer.

Rachel Sandison, deputy vice-chancellor for external engagement, says her conversations with Ukrainian colleagues are “humbling” and “heartbreaking”, but she takes solace from knowing they are doing some good.

Richardson, at Sheffield Hallam, says: “When this is all over, if there were no Ukrainian universities because buildings have been destroyed and staff and students have just left, it would take generations to rebuild.” 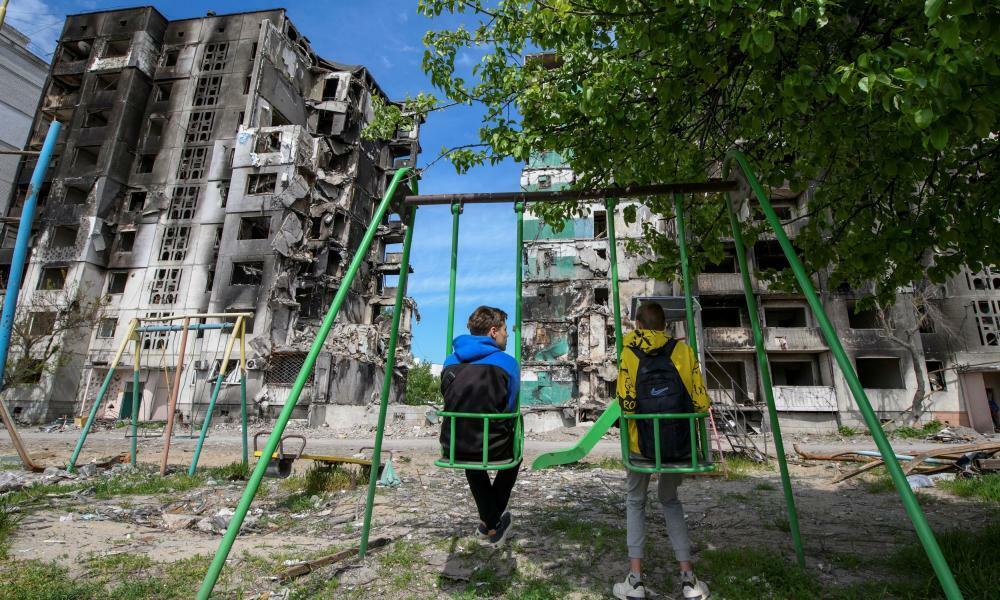