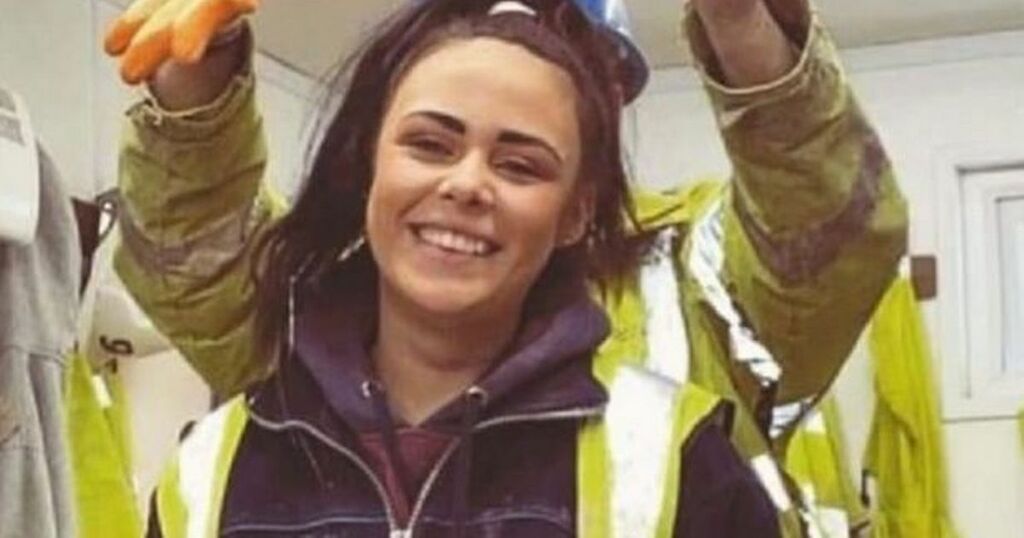 A self-confessed 'girly girl' bricklayer is determined to show 'sexists' who accuse her of 'bringing construction to the ground' that she can do a 'man's job' and still love glamming up at the weekends.

Female construction worker Nicole Carlin claims she has had to fight back against 'sexist' comments and assumptions she must be a 'tomboy' ever since starting her apprenticeship in 2017.

The 22-year-old says the close-minded comments range from strangers branding her the 'downfall of the industry' to asking Nicole why she isn't 'fetching the tea'.

But Nicole never lets people's ignorance hold her back and is quick to hit back at haters who she thinks are just 'scared' of being bested by a woman.

And the young builder loves to prove wrong those who assume she can't be 'girly' because of her job, swapping work's high-vis and hard hat for hair and nail appointments in her downtime.

Nicole, of Glasgow, Lanarkshire, said: "I tend to find it's the older generation who take more issue with me being a female bricklayer.

"They have older traditional ways as they're used to things being a certain way - females were never seen on sites before.

"They can get a bit sexist. You'll get comments, sometimes you'll hear stuff like 'why aren't you getting the tea?'.

"One time somebody commented that what I was doing was a 'man's role' and construction was 'falling to the ground' if I was the new type of bricklayer coming in.

"I surprised myself at that moment. I'm not as sensitive as I thought as I replied, 'Well if you're uncomfortable or threatened because females are entering the roles maybe that problem lies with you. Maybe you're scared a girl could do it better'.

"When people find out I'm a bricklayer, they do make assumptions. Usually, they'll think about how heavy something is and whether I'd be able to lift it.

"People definitely assume that I'm a tomboy because I work in construction.

"I'm still girly but you can't really show that at work. Outside work, I like doing my hair, my makeup, my eyelashes and stuff."

While she has had to deal with her share of nay-sayers, Nicole has also encountered a great deal of support particularly from other women in her line of work.

The support and encouragement from women around her has made Nicole more determined than ever to inspire other girls to go into the industry.

Nicole said: "My main goal is to breakdown some myths that it is just a man's job and I'd like girls to know that this is a great career choice to definitely think about.

"At my company there are four other girls - one joiner and three painters. There are a lot more girls who are applying to get into construction jobs.

"Every female I've come across that's either at work, college, meetings, anywhere, we are all very supportive of each other and it is really nice to meet other women across construction.

"I feel lucky as the sexism hasn't affected me in any major way but that's probably down to the support system I have around me.

"A lot more people nowadays are open to the idea of a female bricklayer.

"Most people are intrigued and just ask questions about why and how I chose to become a bricklayer."

Nicole's interest in construction started in her teens when her friends from other schools started taking up woodwork for their GCSEs.

Disappointed to discover her school didn't offer anything similarly 'hands on', Nicole had a rant to her family and her uncle suggested she look into college courses.

While her family were 'shocked' when makeup-loving Nicole came back with a dream to pursue her current career path, they have supported her every step of the way.

Nicole went on to complete a college course in construction and is now nearing the end of a three-year apprenticeship with an additional Advance Craft award.

Nicole said: "Construction is very practical, it's very hands-on which I quite enjoy.

"What I enjoy most about bricklaying is the people. You have a good laugh when you're doing work like that. The days just fly by.

"When it's sunny on a nice day, you can have a laugh.

"When I first told my mum I wanted to go into bricklaying, she was quite shocked.

"I'd always really been into my makeup and my hair so you could say I was quite girly. It was definitely shocking because of that aspect.

"But my family supported me. My mum especially was really pleased for me."