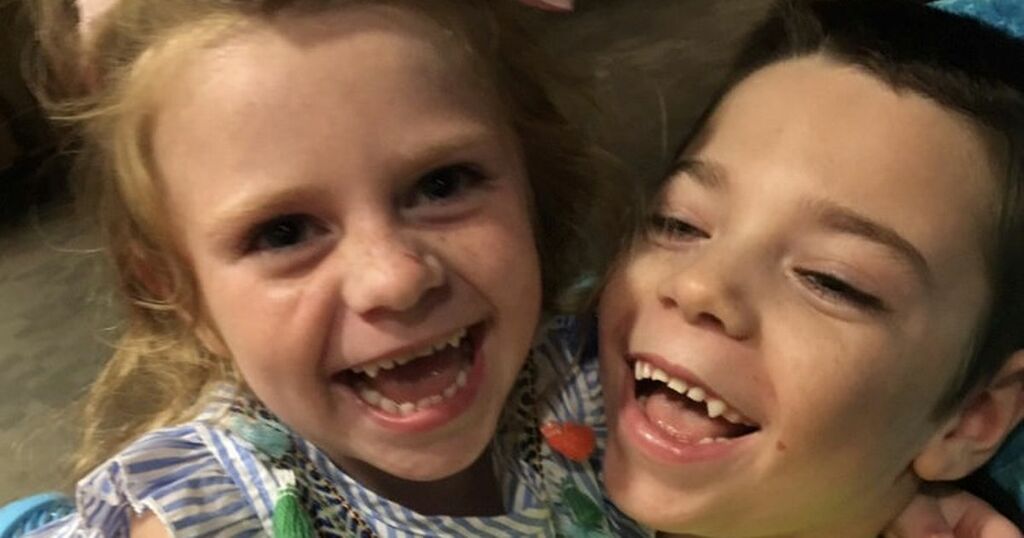 An eight-year-old girl who watched her older brother go blind while suffering the same genetic condition she has is undergoing a new trial treatment to save her eyesight from the same fate.

Amelia Carroll, 8, has Batten Disease which is often referred to as 'childhood dementia ' as result of its degenerating symptoms which include vision loss, seizures, loss of mobility, speech and ability to swallow.

The schoolgirl from Poynton, Cheshire, is the second child in her family to be diagnosed with the condition, following her older brother Ollie, 11, who has already lost his sight.

Now parents Lucy and Mike are praying a new £200,000 trial at Great Ormond Street Hospital, which they helped to fund, will allow Amelia to keep her vision.

She added to told BBC North West: "We have watched our son Ollie go blind, and now the same is starting to happen to Amelia."

Last year the family set about fundraising £50,000 to help fund the pioneering enzyme treatment which takes drug, Brineura, used to slow the disease, and injects it directly into the eye in a bid to prevent loss of sight.

Their contribution towards the £200,000 trial which was funded by Battens Disease Family Association (BDFA) has allowed Amelia and other children to receive the treatment, which is currently not available on the NHS.

Now Amelia is one of the first two children to start the trial, which was launched in July - but it will be another year before they can tell if it has worked.

Before the trial, Lucy told the MEN that it was a race against time to save Amelia's sight, which was already deteriorating.

She said: "It isn't just her sight - it will have a huge impact on the quality of her life.

"I don't think you can put a price on that, and it's not just Amelia who will benefit from the new treatment."

The mum of five has three other children who thankfully have not been diagnosed with Batten Disease.

But Lucy described the heartbreak of watching Ollie lose his ability to walk talk and see.

"As a parent you can't really describe it other than horrendous," she added.

"It's just awful to think that he can't see his mummy and daddy or his siblings.

"His world is darkness now and there's nothing to help him.

"That's why this final push for Amelia is so important."

The trial will help around 50 children in the UK and will last 18 months.

Prof Paul Gissen, from GOSH, said: "If successful, we hope our work can pave the way to saving the sight of more children with this disease to preserve their quality of life for as long as possible."

Ms Carroll also thanked well-wishers worldwide for their support, adding: "It is so heart-warming and it does get us through the dark times."