Girl, 4, asks mum "why's my sister in heaven?" after baby born without windpipe 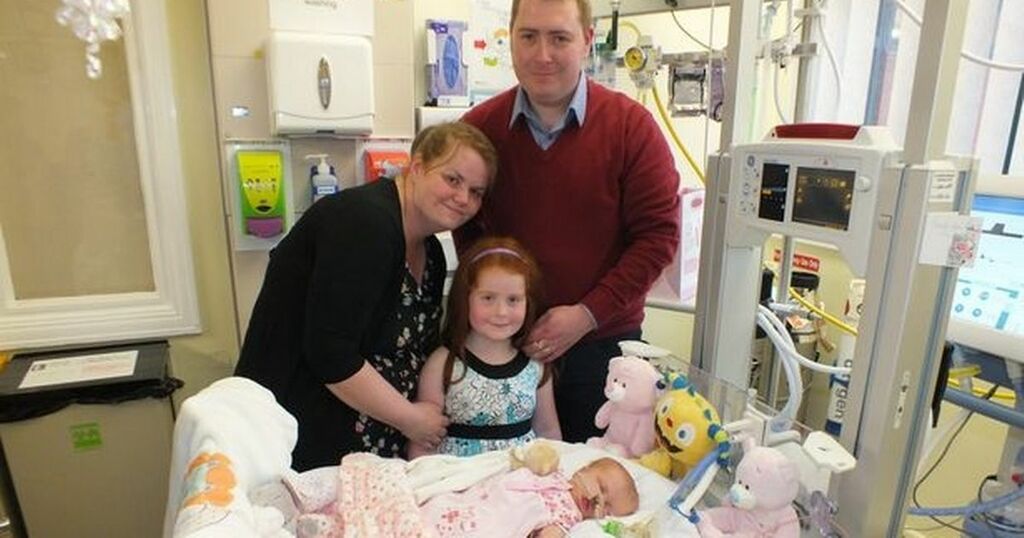 A little girl whose sister died within days of being born without a windpipe asked her mum a heartbreaking question.

Baby Georgie was born to parents Emma Weaver, 39, and Leigh, 40, and diagnosed with a condition called tracheal agenesis.

Doctors told the devastated couple their newborn didn't have a windpipe and was "incompatible with life".

Emma told the Liverpool Echo they were in "complete shock" as they were told there was nothing they could do and they had to say goodbye to the little girl.

Emma said: "It was such a huge shock. It was a very difficult and trying time for us.

"Everything was going okay until I was diagnosed with gestational diabetes, I remember it was just before Easter as I couldn't eat any chocolate.

"A couple of weeks after that I was diagnosed with polyhydramnios - too much amniotic fluid - when I gave birth I had two and a half times more than the normal amount.

"As I am a nurse I knew if I googled it I knew I would just worry myself unnecessarily, but the doctors thought there may have been something wrong with her bowel."

She said it was only after Georgie was born weighing just 4lbs at 34 weeks that doctors realised what the real problem was.

Emma, from Neston, said: "She was struggling to breathe and at first they said she was just 'a bit drunk' from the pethidine."

She was transferred from Arrowe Park Hospital to Alder Hey, where the couple were told it could be tracheal agenesis.

"They said she would need a CT scan and if there was a bit of a windpipe they could work with that, but if there was nothing, it would be incompatible with life," Emma said.

"We were just in shock, we had no idea of any of this until she was born."

Scans showed Georgie had no windpipe, Emma said: "I asked the consultants' advice on whether to bring in my daughter Jess, who was six at the time, just with her being so young.

"They said to me 'how can she say goodbye to someone she has never met?'

"Looking back, it was absolutely the right decision to bring her in, all the staff at Alder Hey were so wonderful with her and Georgie, they let her help take her hand and footprints and so did Georgie's cousins, all the family got to meet her.

"We only had such a short time with her so we had to make as many memories with her as we could.

"As the days went on she would respond to us a bit more, particularly when Jess would talk to her, her little feet and hands would be dancing.

"And she had the tickliest feet, you would only have to touch them and she would be dancing."

Georgie was five days old when she passed away in 2014. Her sister Jess is now 13 and Emma has had another little girl since.

Emma said: "This September would have been Georgie's first day at junior school.

"Losing her so early means we missed all these memories with her, but marking them and talking about them keeps her part of our family, because she still is very much part of the family.

"We talk about her every day and Iris will go and hug her photo. She is also at an age now where she is starting to question and it will sometimes be just while you're driving and she will ask 'why is Georgie in heaven?'

"But we have always felt it is good to be open and talk about it."

When Georgie passed away Emma and Leigh used the Alder Hey bereavement counselling at the Alder Centre, who helped them through their grief.

Emma said: "About five months after Jess started struggling, so we asked for their counselling services for her and a lovely lady called Karen helped her so much.

"She would go and it would just be her space to talk to someone who wasn't part of it and say whatever she wanted without the fear of upsetting anyone.

"They completed a workbook together where she wrote letters to Georgie and we still look back on it now as more memories with her."

Since Jess saw her baby sister in hospital she has raised thousands for poorly children through charity events, including raising £25,000 for the Alder Hey Children’s Charity by riding over 300 miles in a single month.

Emma said: "We are so proud of her, it is an unbelievable amount of money.

"The bike riding started because we had bought her a pink trike the day Georgie was born as a gift to her from the baby.

"She had been riding it around New Brighton when I realised I was in labour."

The Alder Centre is unique and the only one of its kind in the country - providing outstanding bereavement and grief counselling with care and education for anyone affected by the death of a child.

The Centre Team work closely with Alder Hey Children’s Hospital to provide bereavement support services and counselling for anyone affected by the death of a child of any age, under any circumstances, no matter how recent or long ago.

Last year the Centre supported 174 new families through their bereavement team and provided counselling to 200 referrals bereaved through child loss.