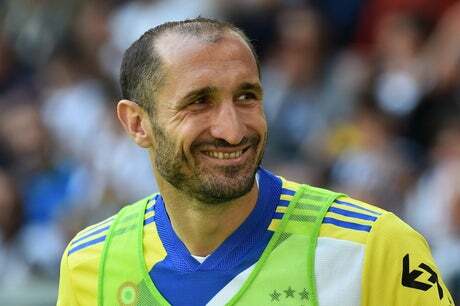 Evening Standard
‘On Monday, I will say goodbye to my Juventus Stadium’ – Giorgio Chiellini confirms he will leave Italian giants

Veteran defender Giorgio Chiellini has confirmed he will leave Juventus at the end of the season.

Arsenal found themselves trailing 2-0 against Tottenham after 37 minutes, but fans have noticed a crucial moment that could have…

Giorgio Chiellini has confirmed he will leave Juventus this summer as he ends his glorious stint at the club to coincide with his retirement from international football with the Italian national team.

Last month, Chiellini announced that he would be retiring from international duty with the Azzurri after their friendly clash against Argentina in June. The 37-year-old’s departure from both teams marks the end of a remarkable era in which the veteran player showed, better than anyone, that “defending is a joy”.

The defender won 20 trophies with the Bianconeri, including nine Serie A titles in a row between 2012 and 2020. He also helped the club reach two Champions League finals and enjoyed an equally iconic international career, winning 116 caps and lifting the European Championships for Italy last summer.

That international victory with the Azzurri may have been the sweetest success of the defender’s career. It came two decades on from making his senior debut for Livorno and just a month shy of his 37 th birthday. Despite his advancing years, Chiellini was arguably the most iconic player of the tournament – combining his immense performances with an infectious personality, both serious and light-hearted.

There was the image of Chiellini’s satisfaction when singing the Italian national anthem. The image of the Italy captain joking with his Spanish and English counterparts ahead of their crucial penalty shootouts. The image of him cynically fouling Bukayo Saka in the final.

Chiellini gave an interview, highlighted in The Athletic, explaining how he had changed his game in his advancing years: “I’m not as explosive or as quick as in the past, but I am smarter. Playing one-against-one doesn’t matter to me, I’ve learned to move earlier, without allowing the attacker to do what he wants. I take him over to the side where there’s less space. I play offside. Prevention is better than the cure.”

Have Your Say! Is Chiellini the best defender of the last decade? Tell us what you think here.

The defender was able to shut down major attacking threats during the tournament, including those of Romelu Lukaku, Alvaro Morata and Harry Kane. Chiellini does meticulous preparation ahead of facing each opponent, and watches video footage and analysis of the strikers – up to an hour’s worth ahead of the games. This was an approach he began at Juve when Claudio Ranieri was boss.

Chiellini added: “It helps me form a connection with them. I need to know what they like most, which runs they make. It’s my way of getting on their wavelength and syncing up with them. I watch every goal a team has scored that season, too. If we’re playing Barcelona, that means watching 80 or 90 of them, but you get an understanding of how they play from how they score and how you might be able to guess their intentions.”

The defender continued: “It’s a subtle psychological game, reading a striker’s mind. It’s the most important side to my game. We’re talking about moments, feelings. A top defender has to be almost clairvoyant.”

Yet for all the iconic images that Chiellini offers, perhaps the one that is most striking is his celebrations on the pitch. If he makes a last-ditch block or tackle, he can be seen high-fiving those around him and jumping in joy as if he had found the back of the net. Moreso than any other player in the contemporary era, he has made defending an art form. Chiellini has said: “Destruction is also a creative operation.”

The Italian has offered an explanation for his overt celebrations and how he views scars and injuries as a “collection” that he has obtained over his career: “They must have given me at least 100 stitches. Blood doesn’t bother me, especially not my own. For me, defending is joy. Getting a decisive block in is pure joy. Those last-gasp tackles and unthinkable goal-line clearances give me so much more satisfaction than scoring a goal. Scoring’s nice, but it isn’t my life. Stopping one from going in is.”

Chiellini began his professional career as a defensive-minded left-back, but soon adapted into the aggressive, courageous, physical, and hard-tackling central defender – the position in which he became so famous. He is known for his uncompromising, rugged, tenacious and no-nonsense playing style with his aggressive ball-winning particularly notable. Yet his positional awareness, ability to press high up the pitch and provide an aerial presence in both boxes were all key.

The veteran defender is now set to close two glorious chapters of his career and bow out of the top level of football. He made defending and destruction an art form.

Evening Standard
‘On Monday, I will say goodbye to my Juventus Stadium’ – Giorgio Chiellini confirms he will leave Italian giants

Veteran defender Giorgio Chiellini has confirmed he will leave Juventus at the end of the season.

Arsenal found themselves trailing 2-0 against Tottenham after 37 minutes, but fans have noticed a crucial moment that could have…