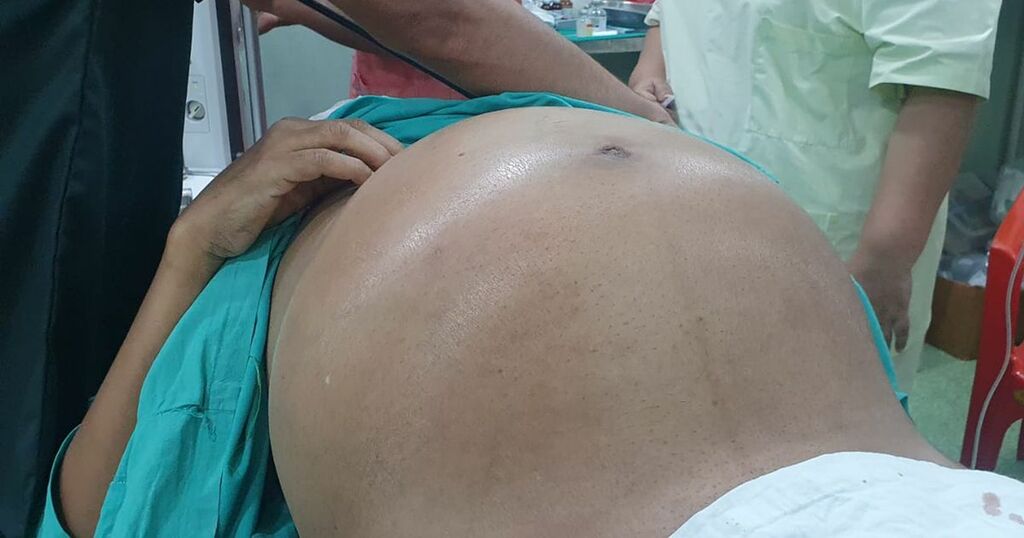 A pair of surgeons have shared graphic photos of a gigantic 22lb tumour being removed from a patient's stomach.

Arnab Mukherjee, 45, had been complaining of severe abdominal pain for more than two months but claims doctors failed to initially detect the tumour - until it quadrupled in size.

After consulting doctors at Victoria Medical Centre, it was discovered that the musician from Kolkata, India, had a 22lbs malignant tumour that had become the size of two rugby balls.

He was referred to Lions Hospital where Dr Makhan Lal Saha and his daughter Priyanka Saha performed a life-saving surgery and removed the tumour in a four-hour-long operation on October 2.

Dr Makhan said: "It was a very critical and rare case. The tumour wasn't detected in the very first step. It took several tests to understand what it was.

"The patient's life was at risk because the tumour was so big in size."

A team of two surgeons helped remove the cancerous tumour, known as a retroperitoneal sarcoma.

Despite the surgery being a success, Arnab will now need further cancer treatment.

Dr Makhan said: "The patient is stable and is having liquid food every two to three days.

"It took almost four hours to remove it. It was a life-saving surgery. We successfully removed the tumour and no other organ was damaged or removed.

"As the tumour was malignant he will now go through chemo and other cancer-related medication."

Sarcoma is a rare cancer that develops in the connective tissues, such as muscle, bone, nerves, cartilage, tendons, blood vessels and the fatty and fibrous tissues.

Retroperitoneal sarcomas occur in the retroperitoneum - which is deep in the abdomen (tummy) and pelvis, behind the abdominal lining, where organs such as the major blood vessels, kidneys, pancreas and bladder are located.

The main types of treatment are surgery, radiotherapy and chemotherapy, Sarcoma UK explains.