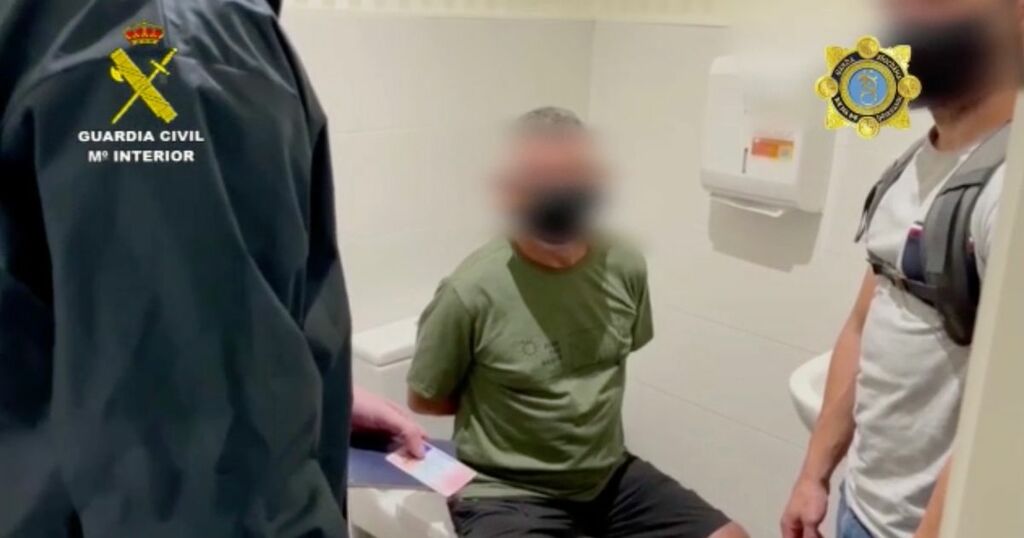 A Spanish police officer terminated Gerry “The Monk” Hutch’s life on the run by telling him: “Hi Gerry, Guardia Civil. This is the end. You’re under arrest.”

The elite cop, who we have decided not to name, has detailed the moment when the officer spat out the sentence the gang boss never wanted to hear.

Police interrupted Hutch’s romantic restaurant meal with wife Patricia before he was cuffed and searched in a nearby loo.

It was a dramatic end to a four-month-long investigation by the Civil Guard Central Operative Unit’s Fugitive Task Force.

It came two days after the Irishman gave away his Costa del Sol hideout by walking onto his balcony for some early-morning fresh air.

Undercover police watching the area managed to get a photo they used to confirm the man they were hunting was bunkered down there. The last moments of Hutch’s failed attempts to stay ahead of the law were revealed yesterday by the head of the team tasked with capturing him.

The formal investigation to locate and catch the Dubliner began in April after Ireland issued a European Arrest Warrant for him over the February 2016 Regency Hotel attack.

Investigators revealed Hutch had held a summit with Dutch-based criminals at his hideout in the Costa del Sol resort of Fuengirola for reasons still being probed.

It has been claimed he had forged contacts with foreign drug cartels and made regular trips to the Costa del Sol over the past few years to organise shipments of drugs. He disappeared off the police radar shortly after flying to Malaga from his home in Lanzarote ahead of the EAW being issued.

An operation to arrest him when he failed to catch a return flight to the Canary Island following a suspected tip-off he had become a wanted man.

Hutch, dressed casually in sandals, shorts and a T-shirt when he was arrested, was nabbed just after 8pm on August 12.

He had walked the short distance from his four-bed apartment hideaway and was sitting down for a meal at a town centre Italian eaterie called Limoncello. He had shaved off his beard and cut the long hair he was sporting when he was picked up on Malaga Airport cameras as he arrived on the Costa del Sol more than four months earlier.

Spanish cops discovered he was using fake Croatian ID when they searched him after he was cuffed
in the restaurant toilet as a Garda officer watched on.

Hutch is being held on remand in jail near Madrid ahead of his expected extradition to Ireland and trial.

The boss of the Civil Guard team said: “From the moment we knew for sure which flat our target was in we put it under 24/7 surveillance.

“A photo we obtained of him on his balcony enabled us to determine 100% the man we were hunting was staying at the apartment in Fuengirola in the area we had under watch.

“After so many months trying to locate him we were adamant he wasn’t going to get away.

“He wasn’t using a car and that was something we were aware of. We know little about the life he was leading in Malaga because we began to watch him closely the day we saw him on the balcony.

“I can’t give you any more details but we know he had contact with people linked to organised crime in Holland and that contact occurred in the property he was hiding in.”

The senior cop also detailed about the night of the arrest and how Hutch made his way to the eaterie.

He revealed: “He appeared to take certain precautions by stopping when we weren’t expecting it and went round in circles a bit without taking the most direct route but they didn’t buy anything first or go down to the beach.

“He and his wife sat inside the restaurant but I seem to recall he chose a seat that was behind a pillar.

“We saw they had gone into the premises but didn’t have officers inside waiting because we didn’t know they were planning to go there. We waited at the door while a couple of officers checked there was no other exit apart from the front door and none of the target’s aides were in the restaurant which would have complicated the execution of an arrest in conditions of safety.

“When we saw he had no opportunity to escape some two minutes or so later we went in.

“It looked like he was still choosing the pizza he wanted
to eat.”

The cop revealed that his team were careful not to alert the other 70 diners to their operation.

He added: “We didn’t want to cause alarm and we went in with support from a specialist team that takes charge of those arrests which are deemed to be potentially complex where we could face a violent reaction.

“The target’s wife left the restaurant and two officers went after her because we couldn’t allow her to return to the property they were staying at which we knew we’d need to search the following day. She was walking away from the restaurant in the direction of the apartment when she was stopped.

“Our target made it clear after his arrest he wasn’t going to co-operate with us and didn’t want to be present during the search of his rented home so it took place the following day in the presence of his lawyers.

“It’s the first time as a police officer that something like that has happened to me. He never denied at any minute that he wasn’t Hutch, even though he had fake ID on him.

“A companion was the first to speak to him and after showing him his Civil Guard badge, said to him in English: “Hi Gerry, Guardia Civil. This is the end, you’re under arrest.”

The officer explained he was being held on a European Arrest Warrant and read his rights.

He added: “He didn’t appear to be surprised and seemed fully conscious of what was happening and why. We speak English fairly well.

“At one point he turned to the garda and told him after making it clear he wasn’t going to co-operate in any way, ‘You already know who I am, you know I’m Gerry Hutch’. The passport and other document he was carrying were both Croatian and both in the same name.

“He wasn’t carrying anything else out of the ordinary.”

The Civil Guard boss revealed the personnel numbers involved in the operation.

He said: “All seven people in the team I command and form part of were involved in this operation.

“Along with a specialist surveillance team composed of around 12 people who acted as a support unit as well as a specialist team of officers involved in the execution of the arrest who were another nine people.

“I would say that in total during the investigation some 60 to 70 Civil Guard officers have intervened including in the Canary Islands.

“That indicates to you the importance of the man the Irish authorities were seeking the arrest of.”