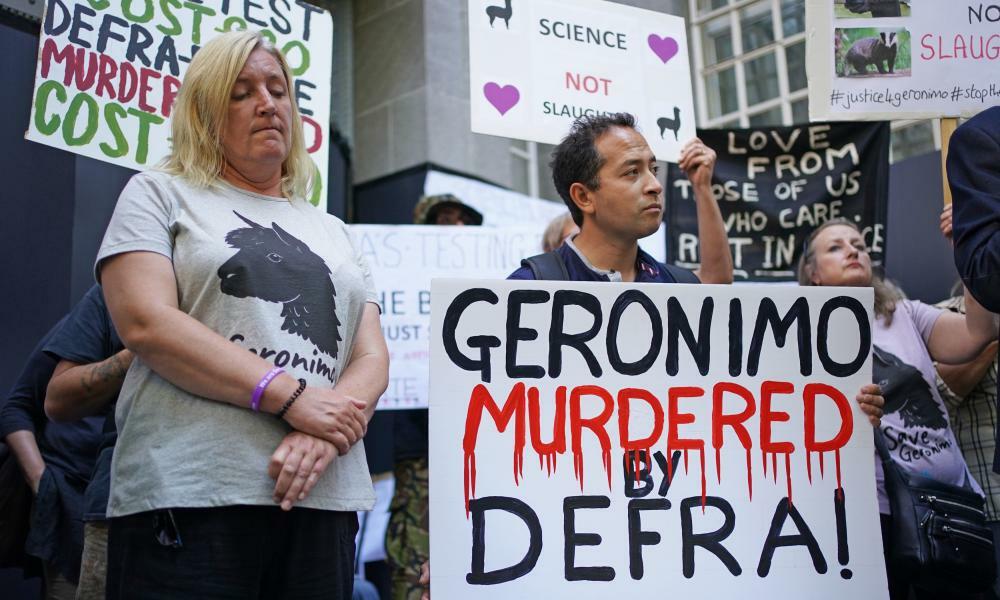 A fresh row has broken out between the owner of Geronimo the alpaca and the government over the results of an initial postmortem examination of the culled animal.

However, the Department for Environment, Food and Rural Affairs said a number of TB-like lesions were found in Geronimo and will be further investigated, adding the full postmortem results will not be concluded until the end of the year.

The dispute is the latest in a long line of battles between Macdonald and the government over the fate of Geronimo, who was put down last week.

The eight-year-old animal, who had tested positive twice for bovine TB and whose fate triggered heated debate across the country, was taken from his home at Shepherds Close Farm in south Gloucestershire on 31 August and later put down.

Lawyers acting for Macdonald, a veterinary nurse, said she had received a letter from the government’s legal department containing the preliminary findings of the postmortem. These findings were reviewed by veterinary surgeons.

In a statement, the lawyers said: “As reviewed by Dr Iain McGill and Dr Bob Broadbent, the preliminary gross postmortem findings are negative for visible lesions typical of bovine tuberculosis.

“For clarity there are no white or cream caseous, enlarged abscesses typical for bTB in alpacas whether in the lungs, bronchial, mediastinal or retropharyngeal lymph nodes.”

Macdonald has formally requested the full findings of the postmortem report and the results of further tests on tissue samples, blood, serum or plasma taken from Geronimo, and other additional test results.

Defra appeared to directly contradict the claims. The chief veterinary officer, Dr Christine Middlemiss, said: “We have completed the initial postmortem examination of Geronimo. A number of TB-like lesions were found and in line with standard practice, these are now undergoing further investigation.

“These tests include the developing of bacteriological cultures from tissue samples which usually takes several months – we would expect to complete the full postmortem and culture process by the end of the year.”

Geronimo was brought to England from New Zealand by Macdonald in August 2017 and tested positive for TB in the same month. He had been living in isolation ever since; he could see some of the other 80-odd alpacas on the farm but was separated from them by a fence.

In July 2018, a court order for the animal’s destruction was sought by the government and he was given a stay of execution, to be slaughtered by the end of August that year.

Macdonald mounted a legal challenge, pleading with the UK government to allow Geronimo to be retested.