By Jewel Wicker in Atlanta 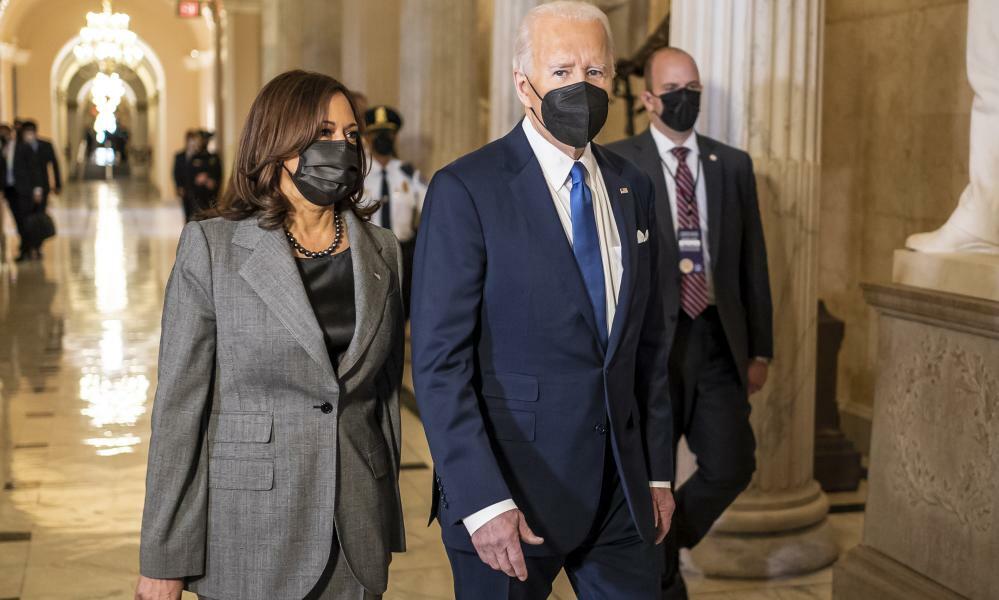 A coalition of influential political activists in Georgia that boosted turnout in a state crucial to Joe Biden’s victory in 2020 is refusing to attend the visit planned on Tuesday by the US president and Kamala Harris to speak on voting rights.

The group had warned the president and vice-president that they needed to announce a specific plan to get national voting rights legislation passed or risk their high-profile trip to Atlanta being dismissed as “a waste of time”.

In remarks trailed by the White House, Biden will on Tuesday say Senate votes on voting rights legislation in “the next few days … will mark a turning point in this nation.

“Will we choose democracy over autocracy, light over shadow, justice over injustice? I know where I stand. I will not yield. I will not flinch. I will defend your right to vote and our democracy against all enemies foreign and domestic. And so the question is where will the institution of United States Senate stand?”

“Instead of giving a speech tomorrow, the US Senate should be voting tomorrow. What we need now, rather than a visit from the president, vice-president and legislators is for the White House and Senate to remain in DC and act immediately to pass federal legislation to protect our freedom to vote,” the groups said in joint statement.

Biden and Harris will visit Atlanta to advocate for flagship bills, currently stalled, to protect voting rights, which are increasingly under threat across the US, including in Georgia.

But many Georgia activists and organizers have made it clear they do not support using the state and its civil rights legacy as “a photo op” without a meaningful plan of action.

“If this is just a rhetorical exercise, just an attempt to perform advocacy, then I think it might be a waste of time,” Nse Ufot, CEO of the New Georgia Project voting rights advocacy, told the Guardian before the news the coalition would stay away.

Ufot said it was local organizers that helped deliver White House and Senate victories. She is also pushing for the elimination of the filibuster rule that requires 60 senators to bring laws to a vote, while the Democrats only have 50 seats and Republicans won’t support the voting rights legislation.

“There needs to be a federal standard for elections or the 2022 midterms are going to be chaotic,” Ufot said.

Last Thursday the coalition of activists released a scorching letter warning leaders not to travel without a “finalized plan”.

It noted that Georgia voters “made history” to flip the state blue in November 2020, the first time it voted for a Democratic presidential candidate since 1992, with a huge turnout from Black voters, then elected Raphael Warnock and John Ossoff to give the party the edge in the Senate.

The letter said: “In return, a visit has been forced on them, requiring them to accept political platitudes and repetitious, bland promises. Such an empty gesture, without concrete action, without signs of real, tangible work, is unacceptable.

“As civil rights leaders and advocates, we reject any visit by President Biden that does not include an announcement of a finalized voting rights plan that will pass both chambers, not be stopped by the filibuster, and be signed into law.”

The bills blocked by Senate Republicans are the John Lewis Voting Rights Advancement Act and the Freedom to Vote Act.

The latter would create a “baseline national standard for voting access”, according to the Brennan Center for Justice.

The former, named after the late Georgia congressman and civil rights activist, would restore the protections of the 1965 Voting Rights Act, prohibiting states with a history of voter suppression from changing voting laws without federal approval, a provision removed by a 2013 supreme court decision.

The Senate majority leader, Chuck Schumer, hopes to change the filibuster rules to pass voting rights legislation. But he faces opposition from the centrist Democrats Joe Manchin and Kyrsten Sinema, who also stand in the way of Biden’s Build Back Better bill.

We don’t want it to just be a photo-op

Cliff Albright, executive director of the Black Voters Matter Fund, said speeches without a plan of action could send the message the administration believes it’s possible to continue to “out-organize voter suppression”.

“That’s just a bad strategy,” Albright said. “It’s not that we don’t want the president talking about these issues, but we don’t want it to just be a photo op.”

Woodall, the Georgia NAACP president, said activists understand the challenges but it’s time for the White House to figure out how to make change.

“We understand civics. We get it. They’re not senators and there are processes in place, like the filibuster, that require reform. But, that’s not our job,” Woodall said.

“Our job was to get Ossoff and Warnock elected and to ensure that Donald Trump was not the president … Biden won and it was all because of what we did here in Georgia. Now, we’re asking them to do their part, which is to protect democracy.”

“They’ll be coming at a time when our democracy and its future is at great risk,” he said.

But Ufot warned that if election integrity isn’t protected: “We’re talking about losing a generation of voters who think this is a Banana republic and their vote doesn’t matter.”