Looking to gather materials before the Genshin Impact Arataki Itto banner drops? With the Yelan and Xiao banners kicking off Genshin Impact 2.7, we've got a little time before Itto and his second-in-command, Kuki Shinobu, arrive in the second half of the upcoming update. In short, it's the perfect opportunity to gather what you need to level the five-star Geo gangster in advance. Need Golden Wolflord boss materials, Onikabuto Beetles, and Slime drops? We’ve got you.

Unlike the first time around, the Golden Wolflord boss is readily available in-game. Onikabuto Beetles aren't really used for anything right now, despite the fact they've been in the game since version 2.0. And it's almost impossible not to have a shedload of Slime materials when you've been fighting them since Genshin launched. That said, we've compiled a shopping list of everything you need ahead of the Arataki Itto banner if you want to ascend either his level cap or his talents.

On top of these, you'll also need around 430 Hero's Wit, and 420,000 Mora. This amount will vary depending on your world level and therefore how high you're going to ascend Itto.

You'll also need 1,652,500 Mora. This is also just the amount to ascend one talent fully, so you'd need three times this amount if you want to ascend all of Itto's talents.

Where to find Arataki Itto's ascension materials in Genshin Impact

Here we'll go through how to get everything you need, plus some tips for efficient farming:

This is the standard ascension material for Geo characters in Genshin Impact and is earned by defeating any boss with that element, such as the Geo Hypostasis. The ideal boss for this farm would be the Golden Wolflord, since it also gives you the Riftborn Regalia item as well—another that you'll need. Unfortunately, that boss won't arrive until version 2.3, meaning if you want to farm Prithiva Topaz before November 24, you'll have to fight the Geo Hypostasis.

You can often purchase Prithiva Topaz in event shops, at jewelry shops using sigils, and can convert other boss materials into it using Dust of Azoth with the Alchemy Station. This dust is a somewhat rare item, though, as you can only get it through Paimon's Bargains and events.

Riftborn Regalia comes from the Golden Wolflord on Tsurumi Island, which debuted in Genshin Impact 2.3 along with the Through the Mists quest series. You have to finish the Seirai Stormchasers questline to unlock Tsurumi Island along with the region’s first quest, A Particularly Particular Author. In case you need a refresher, the Seirai Stormchasers quests have to do with faring against the electrical storms around Amakumo Peak and meeting the Thunderbird.

After you travel to Tsurumi Island for the first quest, the rest of the island should be open for exploring. Paimon and NPCs may drag you around to complete a few objectives, but then you can travel around the island at your own pace (so long as you light the lanterns through the fog) and unlock the Golden Wolflord at the bottom point of the island. With that in mind, it's definitely worth using some Condensed and Fragile Resin in storage so you can farm the boss.

You've probably spied these stag beetles on trees throughout Inazuma. They are a pretty common material, but you're going to need a lot of them. You can find them around Narukami Shrine and the mountain it's on, as well as near Mikage Furnace on Kannazuka. Unlike a lot of ascension plants and flowers, you can't buy Onikabuto from any vendors right now.

You probably have a million Slime materials already, since they are the game's most common enemy, but if you need more, head to the Blossoms of Wealth or Wisdom in Mondstadt. You'll often have to fight Slimes as part of these challenges to earn Mora or XP materials. Ley Line Overflow, which starts on November 15, also boosts these rewards, so it's the perfect opportunity to slay two Slimes with one stone.

This talent ascension material is earned at the Violet Court on Tuesdays, Fridays, and Sundays. To unlock this domain, simply head to the small island between Narukami and Kujou's Encampment. As with other domains, it costs 20 resin to claim a reward, so it's always worth doing the hardest challenge you can for the chance to earn a higher rarity version of the material or to use Condensed Resin to get twice the rewards.

This material comes from defeating the La Signora boss on level 70+. If you've been unlucky with your drops, you can also craft it using her other materials, by combining the Hellfire Butterfly or the Molten Moment with Dream Solvent at the Alchemy Station. You are given one Dream Solvent for completing Zhongli's “No More Stone” quest and earn it as a reward for completing Trounce Domains and defeating Boreas.

This final material is harder to get and has to be earned when available through limited-time seasonal events and event shops. Excluding events, there are only five crowns to earn in Genshin Impact. One comes from upgrading the Frostbearing Tree in Dragonspine by offering it Crimson Agate, and the other four come from giving Electro Sigils to the Sacred Sakura in Inazuma. Unless the reward previews change, Shadows Amidst Snowstorms is the only 2.3 event that will offer a crown as a reward.

Should I pull for Arataki Itto in Genshin Impact?

It depends. I love Itto, but there are more reasons to say no than yes. The most popular reasons to have Itto are either because you love his personality and playstyle, or you want him to be your main DPS for a mono-Geo team enabled by Gorou. If you’re a new player, I’d advise spending your gems on a character with more easily accessible ascension and talent materials in Mondstadt. Many of Itto’s materials are in Inazuma, which are a pain to get to if you’re not that far in the story.

Itto is strong, but he might not be what you need. It’s definitely not a loss to have him. You just might want to save your gems on a more versatile character in the meta like Xiao, Eula, or Ganyu. 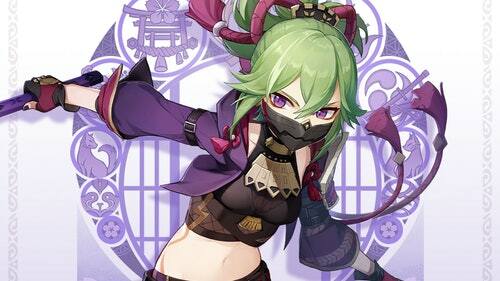 'Genshin Impact' Kuki materials: 7 items to farm before the 2.7 update
Want to know what Kuki materials to farm? We'll walk you through what you need to ascend the Arataki gang's…

Inverse
One subscription that gives you access to news from hundreds of sites
'Genshin Impact' Yelan materials: 7 key items to farm for the Hydro archer

Looking for Yelan materials? We walk you through everything you need to ascend the archer and her talents, as well…

Looking for a Yanfei build? We run through the lawyer's top tier setup, and a free-to-play options so you don't…