Respected, decorated, widely influential generals in the Army of the Punditocracy have kicked open the fire doors on this topic, and the alarms are blaring.

Trump's Youngstown rally bumped us to a new threat level, apparently, a place so dark even ignorant sociopathic narcissists dared not go, until last weekend.

OK, but which was it, do you think, the music or the finger-pointing?

Youngstown saw no notable departures from the standard set list on the Perpetual Grievance Tour, save for the 45th president noting that Ohio Senate candidate J.D. Vance was "kissing my ass," to be there (Vance is the Republican Trump was ostensibly there to "support.")

The troubling innovation in the show was the first-of-its-kind deployment of a song that Trump's QAnon disciples appeared to recognize as "Wwg1wga," according to multiple reports. "Wwg1wga," which stands for "Where we go one, we go all," is part of the twisted QAnon hagiology along with the constant psychotic theorizing about pedophilia, cannibalism, Satan, blood-drinking liberals, the imminent re-emergence of John F. Kennedy Jr., et al.

Trump spokespeople (don't put that on your resume because you could end up on CNN) insisted it was another song, but when the QAnon soldiers in the MAGA crowd heard it, they raised their arms and pointed fingers to recognize the "1" in "Wwg1wga," and both the image and the underlying music blew up the internet Saturday night. Anyone familiar with the superior slasher film soundtracks or who has a sincere interest in Shostakovich knows the power of music to unnerve, but the display of raised arms to Trump's reliably pitiful American carnage message proved especially chilling.

Similar images from Hitler's rallies proliferated online, and even with a couple of days to contextualize all of it, some mainstream opinion leaders nonetheless scalded their media brethren for failing to fully comprehend the existential threat to American democracy posed by Donald Trump and his many layers of butt kissers, past, present, active, inactive, jailed and at large.

"Far too many (in the mainstream political media) continue to disguise the political reality we face," wrote Jennifer Rubin in The Washington Post. "They refuse to use appropriate descriptors to describe Republican conduct, such as 'fascist' or 'racist.' Instead, they mislabel radical authoritarians as 'conservatives.'

"If this were a foreign country, the media would accurately describe the MAGA movement as a far-right cult. Yet in the United States, too many reporters cannot help themselves in normalizing the movement."

Well, again, not guilty, as I've called the appropriate right-wing nutbags all of that and more, and I've warned against the toxic both-sidesism that, agreed, has flooded legacy media — there is no journalistic imperative to balance truth with untruth; it's stupid — but here's the problem:

How do we effectively gauge the tangible dangers of "the political reality we face?"

I see the raised arms at the Trump rally and recognize the horrible parallels, but I also see the expanse of empty seats. I hear the extremist rhetoric and the unconscionable lying, but I also think there is, even among the most feverish Trumplicans, at least some understanding that people like them are going to prison for following this idiot.

More than 900 people have been charged since Trump told his cultists to converge on Washington, D.C., in January of 2021. More than 350 have pleaded guilty. The sentences, though not terribly onerous initially, have begun to get a little uncomfortable, no?

Guy Reffitt, the 49-year-old Texan who threatened to shoot his son and his daughter if they turned him in for, you know, trying to overthrow the government, got seven years and three months for his theatrics that day, and he never even entered the Capitol.

Just three weeks ago, Thomas Webster, 56, ex-Marine, ex-NYPD officer, noted Jan. 6 flagpole swinger, got 10 years for his role in the attempted coup ("Gonna be wild!"). Prosecutors asked for 17 years in the first such trial to go in front of a jury, but the judge credited Webster's 25 years of service to his country and to the NYPD.

In Fulton County, Georgia, up to 17 people with a lot more political clout than the folks hanging around the Covelli Center in Youngstown Saturday are looking at jail time, including Trump attorney Rudy Giuliani.

This is what happens to people, well-intentioned or not, who believe and act on Trump's despicable palaver. They do the time; he does the whine.

Do they not see this? Do none of them see this? 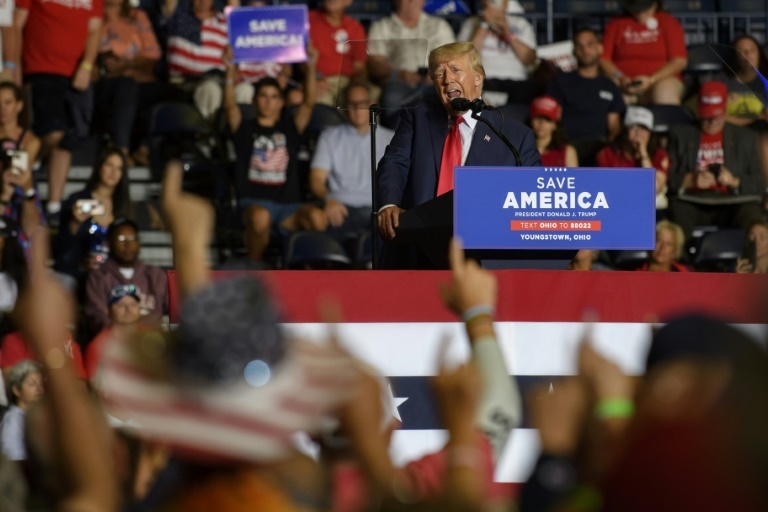 Under pressure, Trump revives QAnon cult -- around himself
Washington (AFP) - Ensnared in legal probes as he mulls a second White House run in 2024, Donald Trump is…

Trump nods to QAnon with a song, while Carlson valorizes violence against teachers and LGBTQ allies for "grooming"