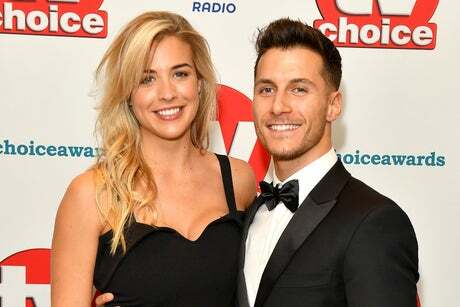 Gemma Atkinson and Strictly’s Gorka Marquez forced to postpone wedding
The couple, who share two-year-old daughter Mia together, haven’t ruled out trying for another baby in the meantime

The couple got engaged in February 2021

Gemma Atkinson has announced that she has postponed her wedding to Strictly Come Dancing star Gorka Marquez.

The former Hollyoaks actress has said that the pair’s busy schedules have resulted in them delaying the wedding.

She told New magazine: “Gorka is literally on tour all of this year. We've only got four days off together”.

Gemma has said that when they do get married, it’ll likely be a small wedding.

The couple met on Strictly Come Dancing and got engaged four years later in 2021. They also have a daughter together who was born in 2019.

But before her relationship with Gorka, Gemma had a wild dating history, including two engagements and flings with famous footballers.

We’ve taken a look back on her past relationships.

In 2007 Gemma dated a world-class footballer - and one of the most eligible bachelors at the time - Cristiano Ronaldo.

Despite being one of the biggest football stars in the world, Gemma hilariously admitted to Manchester's Key 103 radio that they went on a very laid-back date.

She said: "We went to my house and drank cups of tea and watched Only Fools and Horses. Genuinely!

"I don't know if he's into it now but he seemed to enjoy it.”

Gemma also said that she was offered a lot of money to discuss their relationship but she declined it.

She said: “When we did split up I got offered so much money to speak about him and I didn’t want that."

Gemma had a two-year relationship with her Emmerdale co-star Cleveland Campbell between the years of 2003 and 2005.

In 2006 he was accused of punching someone at Gemma’s 21st birthday the year before, but he was later cleared of GBH charges.

Gemma had an on-off relationship with footballer Marcus Bent.

It was during their split that Gemma dated Ronaldo.

But in 2008 the pair rekindled their romance and Marcus was spotted moving his belongings into Gemma’s home.

The couple even got engaged in 2008 but it wasn’t to be, and Gemma reportedly returned his ring to him by December of the same year.

Gemma also had another engagement in 2013, this time to BGT star Liam Richards.

Gemma first met martial arts expert Liam in 2008 while starring in a panto.

Liam had reached the final of Britain's Got Talent.

The pair dated for two years and at the time Gemma said: “Liam is lovely and gets on really well with all my family. We have great fun.”

But their engagement was called off after reports that they had drifted apart.

Gemma Atkinson and Strictly’s Gorka Marquez forced to postpone wedding
The couple, who share two-year-old daughter Mia together, haven’t ruled out trying for another baby in the meantime

The couple got engaged in February 2021