Former Raiders centre Curtis Scott has been cleared of a Canberra nightclub assault after a magistrate found he was acting in self-defence when he broke a man's nose.

The verdict followed Scott taking the stand in the ACT Magistrates Court to describe having felt threatened by the man, who had touched him and expressed a desire to have "a gay experience".

Scott, 24, has not played in the NRL since the Raiders sacked him, partly as a consequence of him being charged with assault occasioning actual bodily harm over the May 2021 incident at Kokomo's.

Now working as a courier in Sydney, Scott gave his version of events to the court on Monday.

The footballer said he had been approached from behind by the alleged victim, who pulled down the back of his shirt to look at a tattoo on his neck.

The 24-year-old said the alleged victim followed this up by saying "something along the lines of, 'I'd like to have a gay experience with you'."

He retaliated by pushing the man and telling him to "get the f--- away from me".

When the alleged victim was subsequently pulled away by a bouncer, one of his friends told Scott not to worry about him because he was "drunk and carrying on".

Soon after this, CCTV footage from the nightclub showed the man's friend grabbing Scott's wrists.

Scott told the court he "got a big flush of fear" when this happened because the alleged victim was still being aggressive from a distance. He said he felt "outnumbered, as if my back was against the wall".

He managed to break free of the restraint but saw the alleged victim coming back towards him, so he threw a punch and landed what defence lawyer Sam Macedone described as "a pre-emptive strike".

"I felt fear coming over me and I had to protect myself," Scott said.

Earlier on Monday, the alleged victim said he had approached Scott at Kokomo's to compliment the rugby league star on his tattoos because "I'm a fan of tattoos and artwork on people's bodies".

He told the court he said words to the effect of "nice tattoos", and that he may have placed a hand on one of Scott's shoulders.

While he did not recall pulling Scott's shirt down to look at his ink, he accepted he had been intoxicated and his memory of the night in question was not "spot on".

The man said he was "walking away from the situation" when Scott punched him.

He also repeatedly denied making any sexual comment or advance towards Scott.

"Certainly not," he replied when Mr Macedone suggested he had.

However, security guard Craig O'Connor, the only witness who was sober at the time in question, indicated he had heard the man telling Scott about a desire to have "a gay moment" with him.

In closing submissions, Mr Macedone urged the court to find Scott had thrown the punch on the basis he had feared an imminent attack.

The lawyer said Scott had an "increased sensitivity" to unwanted physical contact following an incident in 2020, when he was handcuffed, pepper-sprayed and Tasered during an unlawful arrest that left him with post-traumatic stress disorder.

But prosecutor Katie McCann argued Scott was not actually under threat at the point of the punch, saying there had been "ample opportunity" to walk away and the strike was "entirely over the top".

He noted that Scott's hands had been restrained by one man before the alleged victim, who had continued being aggressive after touching him without consent, came walking back towards him.

As Mr Lawton acquitted Scott and dismissed the charge, a woman in the court's public gallery exclaimed: "Yes!"

Outside court, Mr Macedone said Scott was "very pleased that this thing has come to an end".

"It's led to him losing his contract with the Canberra Raiders, and he hasn't had a contract since then," he said.

"It's just a shame that something like this, where he's been found to be not guilty, is what caused him to lose his contract.

"He's now a courier driver, so he hasn't been very happy with how things have gone. But he's happy today that he's been vindicated."

"I'm pretty confident that he's not involved in anything that will cause him any problem.

"It's just a shame that everyone's jumping on his back." 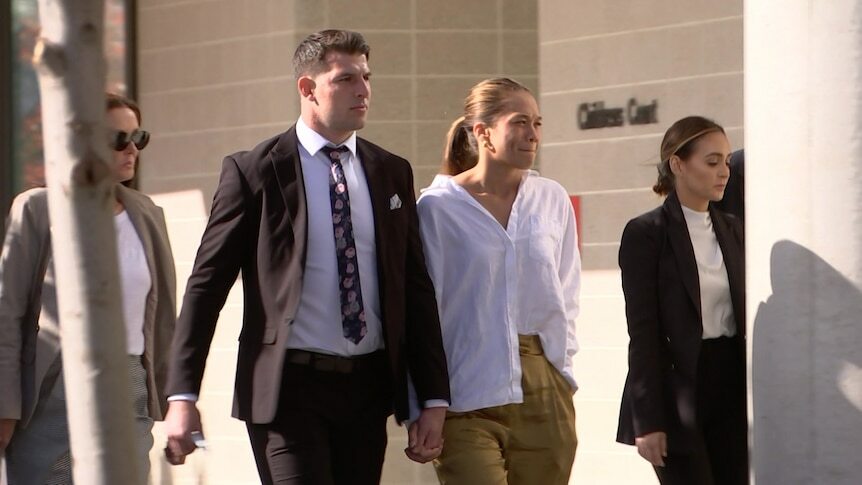 The assault occurred near Pearl Hotel.