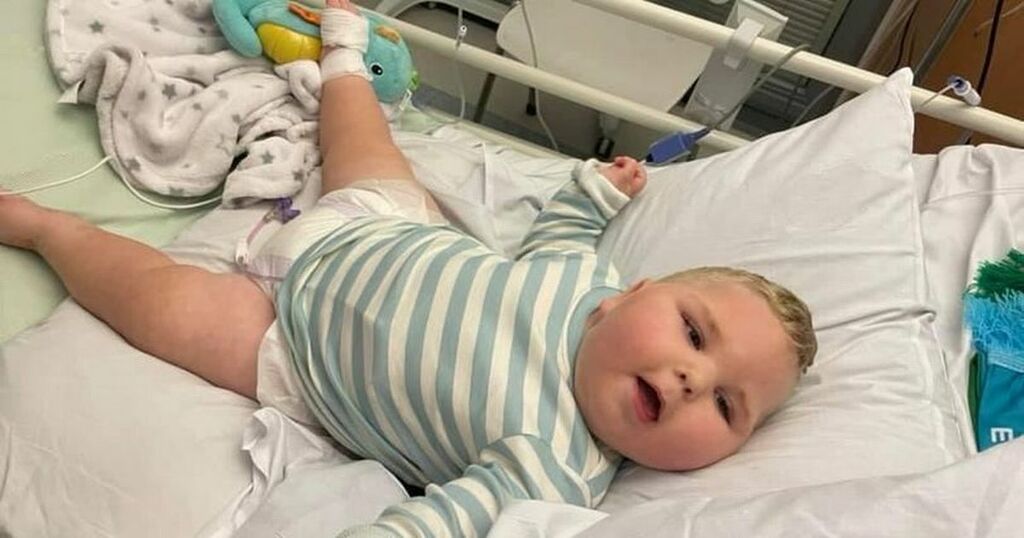 Heartbroken mum's tribute to 'beautiful' baby boy who died following battle with sepsis
Lucy Shields, 36, said that her son Roman, aged two, was her "everything" and she has been "totally lost" since…

Lucy Shields, 36, from Gateshead, Tyne and Wear, had been caring for toddler Roman 24/7 as his battle with sepsis…

A heartbroken mum has paid tribute to her "beautiful" baby boy following his 'unexpected' death at the age of two.

Lucy Shields said her son Roman was her "everything" and she has been "totally lost" since he passed away after a two year battle with sepsis, despite showing incredible strength throughout his short life by fighting off infections and responding well to treatment.

But after developing a water infection Lucy believes that his tiny body no longer had the strength to fight and he died at his home in Gateshead with Lucy by his side on April 13.

Read more: Family's bid to bring body of 'selfless' Gateshead lad who drowned while rescuing his dog home from Spain

Lucy said: "He had so much strength but I think his little body just gave up. I think he thought 'I've gave you two-and-a-half years Mam, now it's your time'."

The 36-year-old added: "Now my life is empty and I have to go on living each day without him. I'm totally lost without him. It breaks my heart and I just miss him so much. He wasn't just my son, he was my best friend, my sidekick, my everything."

Roman was diagnosed with sepsis when he was three weeks old after Lucy dad Richard took him to the Queen Elizabeth Hospital, in Gateshead, with what she believed was colic. But doctors rushed Roman to intensive care after diagnosing the youngster with sepsis and he remained on life support for three weeks.

The life-threatening infection caused Roman brain damage and he was left unable to walk or feed himself, which required him to be fed through a tube. He was diagnosed with epilepsy, as well as a number of other medical conditions and was regularly receiving treatment at Newcastle's Royal Victoria Infirmary.

Lucy said a do not resuscitate (DNR) order was put in place late last year and despite being critically ill, Roman still managed to spend his final Christmas at home with his family. The mum-of-three previously told ChronicleLive : "I don't know where Roman gets the strength from, he's just so bubbly. He tries to babble on and he's such a happy baby. But when he's poorly he gets sick very quickly."

Today Lucy told of how she never expected to lose her son when she did. Lucy said: "It was so awful because I just wasn't expecting it to happen that day, you could have knocked me down with a feather. It's like I've said before, everyday was like living on egg shells because you just didn't know what was going to happen from one day to the next."

She added: "It's so hard because I realise he's never coming back. I looked after him for 24-hours-a-day, seven-days-a-week and now I don't know what to do anymore and I struggle to get out of bed. I'm used to doing his catheter and his meds for him and now my house is just empty."

Lucy explained that Roman had "the best" send off she could have asked for at Saltwell Cemetery on April 26. She said: "He had the best send off. I gave him a horse and carriage and the flowers were amazing.

"Nurses from Ward 1b at the RVI were there to show their respects because he was special to them as well. He had an amazing turn out, his flowers were absolutely beautiful and his horses were amazing, they all had rainbows on."

Lucy she has been visiting Roman's grave everyday as she misses him so much. She added that she finds comfort in seeing that family and friends have been along to pay their respects to her little boy and although there is no headstone at the moment, the floral tributes at his graveside still make his resting place look beautiful.

Heartbroken mum's tribute to 'beautiful' baby boy who died following battle with sepsis
Lucy Shields, 36, said that her son Roman, aged two, was her "everything" and she has been "totally lost" since…

Lucy Shields, 36, from Gateshead, Tyne and Wear, had been caring for toddler Roman 24/7 as his battle with sepsis…