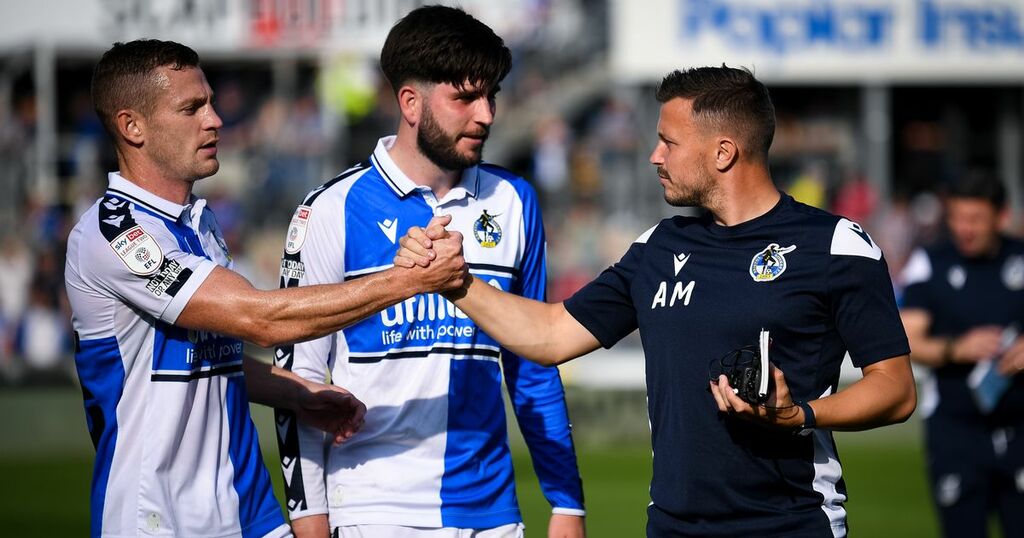 Winning ugly in in football is quite simply defined as not being at your best but still getting three points, and Bristol Rovers’ victory over Crawley Town very much adhered to the blueprint of that term.

The Gas were a very tough watch in the first half of Saturday’s clash at the Mem. Long balls forward were often directionless, neat passages of play in the midfield were a rarity and it looked as though the momentum gained from Tuesday’s win over Cheltenham was slowly dwindling away.

Leon Clarke’s introduction at half-time sparked some optimism amongst those at the Mem because at least there would an understandable target for the route-one football played in the first-half. However, it was unlikely that anybody expected the immediate impact he had.

After just 90 seconds of being on the pitch, Clarke wonderfully headed home Antony Evans pinpoint cross and the Gas were able to withstand countless barrages of Crawley attacks to secure the points.

Here’s a few moments you may have missed from Saturday’s grinding win ...

Millwall Tone back in BS7

As Crawley Town striker Tom Nichols discovered on Saturday, you very rarely receive a good reception when returning to your old club, but Tony Craig is understandably exempt from that category.

While Nichols struggled to get going during his time with Rovers, Craig thrived in the blue and white quarters and became a popular member of the squad during his two and a half years at the club.

Despite only missing one competitive game during his time with Rovers, Craig wasn’t offered a contract extension in 2020 and therefore left the club that summer, to the dismay of many Gasheads. But at the weekend, Craig got the send off someone of his calibre deserved.

On his entrance to the pitch, the 35-year-old was joined by his son who was also present on the field the last time Craig was in Bristol, following the 2-0 win over Sunderland, a game in which Craig played very well in.

Rovers fans also got to see the Craig they knew and loved one final time when he had some choice words for Aaron Collins after the forward seemingly went down quite easily following an aerial battle with the former Millwall man.

At the end of the game, Craig walked to every corner of the Mem and soaked up the appreciation which ended by being serenaded by the Thatchers end one final time.

Thirty minutes into the clash, it was clear to see the game plan set up by Joey Barton was not working.

The long balls forward were easy to deal with, both Rovers wing-backs were pinned in and the majority of the play was contested in Rovers defensive half.

A break in play due to an injury, allowed both sets of players to take in some fluids on what was a very hot September afternoon, but it also allowed Barton to inform his players what he wanted them to do.

Barton could be seen gesturing to Sam Nicholson and Antony Evans to get further up the pitch and try to pick up some second balls.

Meanwhile, Aaron Collins, who cut a frustrated figure up top, didn’t react too well to finding out the game plan was more or less going to remain the same, with him needing to contest more aerial duels.

The former Forest Green man very much enjoyed his last outing in the league at the Mem, taking advantage of Oldham’s high line on several occasions, but with Craig and George Francomb as the defensive pairing, Collins was getting no such luck.

In the ensuing 10 minutes before half time, Rovers did enjoy some possession in the midfield, but ultimately will need to make better use of their creative players in future home games.

While most Gasheads make use of the toilets and refreshments at half-time, those who remained located in the stands got to hear a truly remarkable story as Rovers fan Nik Weeks was interviewed on the pitch by Lance Cook.

Nik took on the task of running to and from his place of work every day for a week, which amounted to a total of 150 miles, in aid of Bristol Rovers Community Trust and TOF ( Tracheo-Oesophageal Fistula) – a charity supporting children born without the ability to swallow.

We are now just over a year removed from Nik undertaking this task and the final total on the JustGiving page was an incredible £13,300. Because of his remarkable efforts, Nik along with his family were welcomed into the hospitality section at the Mem to watch Rovers victory against Crawley.

And while Nik admitted on Twitter it was a day that he will never forget, he unfortunately won’t be able to remember seeing the goal live as he missed Leon Clarke’s debut strike 90 seconds into the second half. Something Rovers owner Wael Al-Qadi made sure everyone knew about a few hours later ...

Emotions both on and off the pitch were at an all-time high throughout the seven minutes added on at the end of the game, but when the final whistle went the reactions of the Gas was fitting for their contributions.

As opposed to their other win in the league this season against Oldham which was seen out rather comfortably, Rovers had to dig tremendously for the victory over Crawley.

James Belshaw made numerous crucial saves in the second half, Connor Taylor made interception after interception and every player likely at some point blocked a Crawley shot, pass or cross.

And it was telling at full time exactly how much it meant to those in blue and white.

Having just run the length of the pitch several times in the final 10 minutes, Harvey Saunders, along with Alfie Kilgour and Josh Grant, simply collapsed to the floor.

Meanwhile, Belshaw and Taylor, Rovers heroes on numerous occasions, gritted their teeth in celebration at each other and embraced.

Every single hug from Joey Barton to each of his players seemed to have a that little bit more passion as they likely realised how much their efforts had warranted those three points.

It wasn’t a pleasure to watch at times, but when it mattered Rovers battened down the hatches, put their bodies on the line and got the job done.