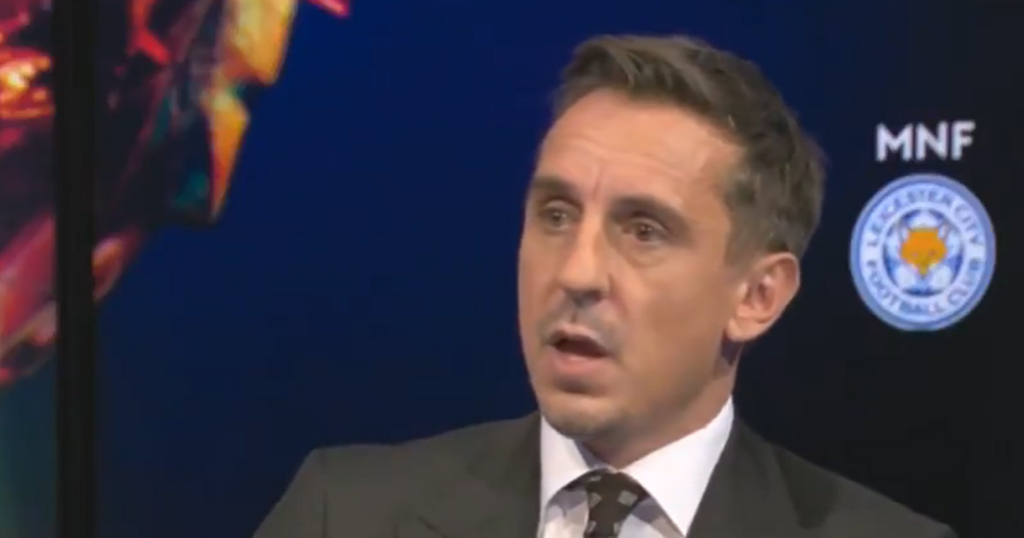 By the end of Monday night's match at Goodison Park, the whole stadium had been completely swept away by a phenomenal Everton comeback.

After being 1-0 down against Burnley and looking as if they could be heading for defeat, a sensational comeback inside six minutes of pulsating action was enough to turn the result completely on its head.

It was almost enough to make fans forget about some of the more unsavoury aspects of the game.

After the match, attention in the Monday Night Football studio soon turned to some rough tackles that had taken place throughout the previous 90 minutes.

Two challenges from Burnley players in particular, both on Richarlison, were highlighted.

Josh Brownhill's lunge from behind was equated to that of Pascal Struijk's on the unfortunate Harvey Elliot the day previously, but somehow the visiting man escaped a yellow card.

Referee Martin Atkinson did award Everton a free kick and saw the challenge come in from behind, but clearly did not think at the time that it warranted a booking.

Perhaps the reason behind that was how early the challenge took place, but we'll talk more about that a bit later.

The second discussion centred around James Tarkowski's clattering of Richarlison in the second period, and that was lamented even more.

The Burnley man got the ball only by virtue of the Brazilian kicking it against him, before the England international scythed through him opponent with force.

Gary Neville l ater said on Sky Sports: "The fans, and we maybe, felt the game maybe was going too far away from where it should be. Everyone barring one or two people have said the way the referees have applied the rules this season have been perfect.

"That [Tarkowski] challenge I've done a hundred times in a season probably, that challenge even back in 1997 is a yellow card I think.

"That to me tonight, not being a yellow card, made me think 'oh let's stop a little bit'. That challenge cannot be encouraged by not being booked."

The pundit is referring to the fact that referees have noticeably let a lot more slide in the opening games of this campaign, trying to let the matches flow a little bit more.

And he's right, on the whole this has been a good thing and has been well received by many.

Over the last few campaigns, especially with the introduction of VAR delays, there has been a more stop-start nature to fixtures in the Premier League - which has only led to frustration for all involved.

A concerted effort to move away from that is certainly a positive, that much must be said.

However, Atkinson let matters go a little too far on the other side of the spectrum on Monday evening - and it should serve as a warning for the rest of the division.

It all really stemmed from Brownhill's early tackle on Richarlison.

Perhaps it was coincidence that the Brazilian was the one fouled here, but this isn't the first time the Everton man has found himself targeted in this sense, and it probably won't be the last.

Regardless, he was scythed down from behind in the opening two minutes of the match - a time which, for some reason, as a notorious reputation as almost being too early for a booking.

Why should that be the case? Players should not be excused because of the amount of time on the clock.

If the same challenge had taken place in the second half, when Brownhill had finally picked up a caution from the referee, surely he'd have seen red and would have been taking an early bath?

Letting that challenge go set the stall for what was to follow.

Burnley are a determined and aggressive team, but not a dirty one. If the referee gives them an inch in terms of using their physicality, they are bound to take it.

And let's be frank, Everton gave some back themselves - as Richarlison drew the ire of his opponents through a late collision with Ben Mee in the first half.

Perhaps that is what was going through Tarkowski's mind when he challenged the forward in the second period. It certainly looked as if he wanted to take the man along with the ball through his tackle.

That idea is something which English defenders have long had drilled into them, but the force with which the Burnley man did go through the Everton star is what was concerning.

This challenge somehow didn't even receive a free kick, never mind a card - whether it be yellow or red, both of which are plausible.

On another day, Richarlison could have been seriously injured twice in that match.

In a sense, Atkinson might be lucky that he didn't.

While it is commendable to see the Premier League look to turn around their officiating and correct the mistakes that have plagued the last few years, this is a warning sign of what could be to come.

Letting the game flow is one thing, putting players in potential danger by not punishing challenges when they should be is another matter entirely.

Pointing all of this out after a win in which, thankfully, no-one seemed to get injured might seem counter-productive to some - but the result shouldn't cloud the decisions that preceded it.

The officials got a lot wrong on Monday evening, and that should be a lesson to the Premier League in the near future.