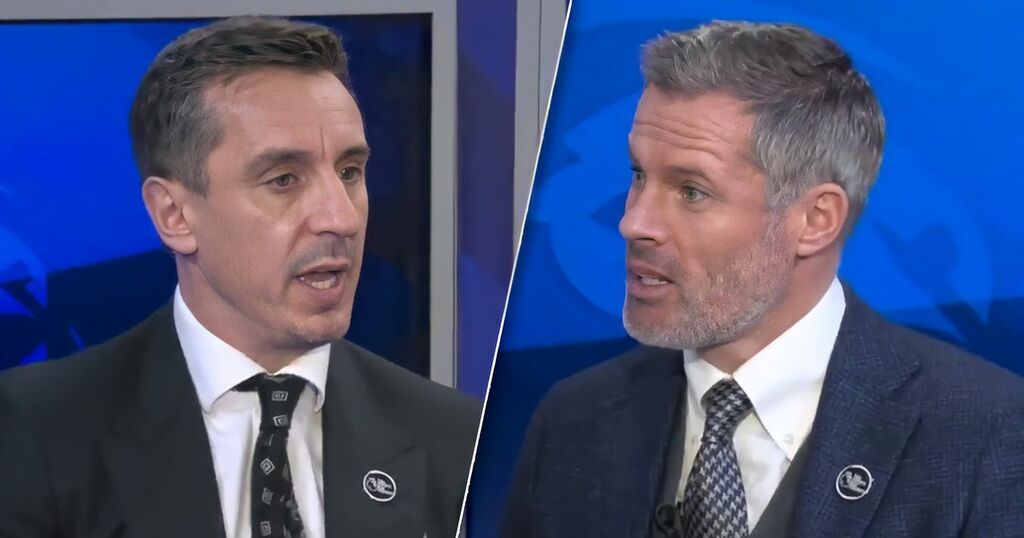 Gary Neville and Jamie Carragher have both given their verdict after the north London derby between Spurs and Arsenal was postponed.

The match was due to be a 4.30pm kick off on Sunday afternoon.

But tomorrow's clash at Tottenham has been called off after a request from Arsenal.

Mikel Arteta's men took on Liverpool in the Carabao Cup semi-final first leg two days ago, with the second tie set for next Thursday.

And in a statement earlier today, the Premier League confirmed that Sunday's game will no longer be played.

It said: "With Arsenal having fewer than the required number of players available for the match (13 outfield players and one goalkeeper), the Board accepted the club’s application.

"The decision is a result of a combination of COVID-19, existing and recent injuries and players on international duty at the Africa Cup of Nations. All clubs are able to apply for a postponement if COVID-19 infections are a factor in their request."

Reacting to the decision, Gary Neville tweeted: "Game off. What started out as postponements due to a pandemic has now become about clubs not having their best team.

"The Premier League must stop this now, draw a line in the sand and say all games go ahead unless you have an exceptional amount of CV cases. It’s wrong".

While Jamie Carragher cheekily quote-tweeted Arsenal's confirmation of the postponement and - accompanied by a thumbs-up emoji - said: "All ok for Liverpool on Thursday".

It is the latest in a spate of postponements to have taken place over the last few weeks.

Liverpool's Boxing Day clash at home to Leeds United in the league was delayed at the away side's request, and the Reds themselves made a successful submission to have the first leg of the their League Cup tie with Arsenal postponed.

In a club statement today, Arsenal confirmed they were "disappointed" to announce tomorrow's match was delayed and added: "We know how much this match means to our fans around the world, but the Premier League has made the decision to postpone the match, due to many players across our squad currently being unavailable as a result of COVID-19, existing and recent injuries, in addition to players away with their countries at AFCON."

Arsenal made the request to the Premier League on Friday.

While the Gunners have a raft of injury concerns and four stars away at the Africa Cup of Nations, Martin Odegaard is believed to be the club's only Covid absentee at the time the postponement request was made.

Ainsley Maitland-Niles and Folarin Balogun were allowed to leave Arsenal on loan this month, plus Granit Xhaka is currently suspended after a red card against Liverpool.

In a press conference yesterday, Arteta said: “We had concerns already before the match against Liverpool, and after the game we had some more issues.

“We haven't been able to assess the squad yet because we couldn't fly last night, so we just arrived to the training ground and all the boys are being looked after.”

After today's decision, there was plenty of online debate around how and why games are called off.

Journalist Rob Harris wrote on Twitter: "Premier League ultimately controlled by the 20 clubs who set the rules and regulations that now give leeway for games to be called off for an increasing number of factors around not having the first-team players they want available to play. Reinforced by Arsenal not playing Spurs".

Miguel Delaney of the Independent said: "Understand that part of the rationale re postponements is not just current Covid cases, but also wider effect of Covid on squads, and player welfare. Arsenal have had 11 cases since 21 December and it forces players back earlier, or to be used more.

"These are seen as effects of Covid - especially given the speed of the Omicron spread - and come into consideration in all meetings now."

While Jack Pitt-Brooke, who covers Spurs for the Athletic, posted: "Arsenal’s circumstances might technically fit the new postponement criteria, but morally it is a scandal that a team can duck out of a game with 24 hours notice and one case of covid. Shows complete contempt for fans and opponents.

"But most clubs would take advantage of this loophole if they could. The real fault here is obviously with the rules themselves. How has the Premier League blindly handed clubs the power to play at their own convenience?"

In their statement today, the Premier League explained how postponement requests are decided on.

The governing body said: "The Premier League’s postponement rules are designed to protect the wellbeing of players and staff, while maintaining the sporting integrity of the competition.

"Club requests are assessed on a case-by-case basis, based on existing rules and adapted COVID-19 postponement guidance, implemented in light of the Omicron variant.

"The Board examines a number of factors, including the ability of a club to field a team; the status, severity and potential impact of COVID-19; and the ability of the players to safely prepare for and play the match.

"The detail within all applications is scrutinised by the League’s specialist staff before the Board makes its decision."

There is no specific indication, at this stage, that the Arsenal vs Liverpool game next week is under threat.