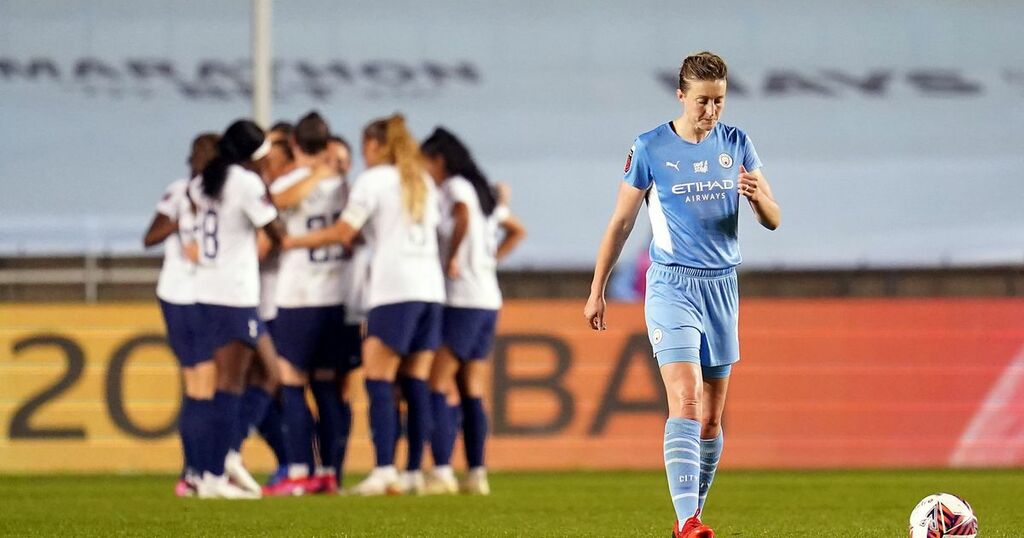 Manchester City manager Gareth Taylor tore into match officials after a controversial own goal saw his side slip to a 2-1 defeat at home to Tottenham Hotspur.

City, despite dominating the first half at the Academy Stadium, were only up 1-0 at the break through Lauren Hemp’s sixth-minute strike.

Rachel Williams levelled things up for the visitors in the second half before a deflection off the arm of Rosella Ayane, leading to the 86 th -minute game-winner, left City petitioning for a handball call.

“I’ve seen it,” lamented Taylor. “It’s pretty incredible really that we’ve not had that chalked off, that situation.

“I still believe the game was in our hands. It should have been out of sight before the time we get to that.

“At the end of the day it’s something we don’t want to happen. I think we’ve got to improve the standards across the board.

“I think there were a few iffy decisions across the night.

“If the officials were to see that back, I’m pretty certain they should say that goal should never stand.”

City dominated two-thirds of possession but Hemp’s was the only one of their six shots on target to find the back of the net.

It took just six minutes before the 2020 PFA Young Player of the Year, who netted six times for City last term, opened her 2021/22 Barclays FA WSL account when she nodded in an Alex Greenwood corner.

Seven key City players were forced to watch from the stands with injury, and their woes soon worsened when right-back Esme Morgan was stretchered off after colliding with Ashleigh Neville, receiving treatment for an apparent knee injury.

Hemp had a good opportunity to double City’s lead in the seventh minute of first-half stoppage time, manoeuvring her way around multiple Spurs defenders to get herself in position in the box before her effort was deflected.

Williams levelled for Spurs against the run of play when she connected with a low ball from substitute Chioma Ubogagu and directed it into the back of the City net.

With the match appearing to be headed for a draw, a Spurs cross looked to hit the hand of Ayane before awkwardly deflecting off City skipper Houghton, grazing keeper Karima Benameur Taieb and trickling in for the shocking game-winner.

“At 1-1 I thought that the game was there for us and then we had that horrible situation that ended up losing us the game so it's not a nice feeling,” admitted Taylor.

“We've got to fight back and we will do.

“We'll regroup and the positives for the players is that there are other teams who have dropped points already. It's not ideal for us, we don't want to drop points at home and we need to be pretty flawless now for the rest of the season.”