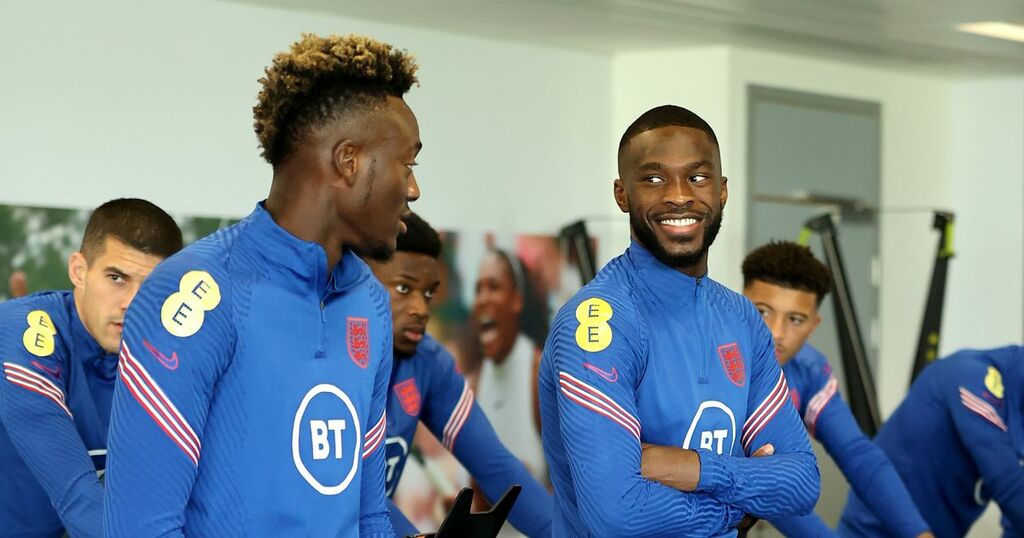 Former Chelsea duo Tammy Abraham and Fikayo Tomori parted ways after years of climbing the ranks together at Cobham by securing permanent moves away from Stamford Bridge this summer.

The pair swapped the Premier League for the Serie A in search of first-team football with Abraham joining Jose Mourinho's AS Roma while Tomori who impressed with his six-month loan at AC Milan which became a permanent deal this summer.

Gareth Southgate's newest faces at St George's Park have weathered the Italian storm, flourishing in their new environments and have already begun to get the fruits from their labours with a pair of England call-ups.

Abraham has earned six caps for the Three Lions since making his debut four years ago at the age of just 20 with a start against Germany in a goalless friendly.

The 24-year-old striker has gone on to enjoy snippets of additional England caps but hasn't represented his country since November 2020 in a cameo display against Iceland.

Tomori made his England debut in November 2019, coming on as a right-back for the final minutes of a European qualifier against Kosovo but the young centre-half is yet to make his first start.

CarefreeChelsea duo Daniel Childs and Scott Clayton were joined by football.london's Chelsea correspondent Adam Newson live on Facebook to speak about the rise of Abraham and Tomori in Serie A that earned their call-ups since leaving the Blues and what fans can expect from them for England.

Newson kickstarted the discussion by noting how Tomori, who had initially joined the Rossoneri on loan from Chelsea before making his move permanent in the summer.

"Tomori was unlucky in truth to not be a part of the squad for the European championships, which was largely down to his form for AC Milan," Newson began.

"He signed his five-year contract at Chelsea in December 2019 and at that point, I think any Chelsea fan thought Tomori is going to be here for the next seven, eight years; he's an academy graduate, he's stepped up and done everything he needed to do."

Newson then added how Chelsea made a mistake with the 23-year-old's loan clause which then ultimately allowed the centre-back to earn his recent call-up.

"Financially Chelsea doesn't usually get transfers wrong but with Tomori they did," he said. "They put a £25 million clause in his loan which took him to Milan within about a month, maybe six weeks. It was clear that Milan were going to trigger that because of the levels he reached.

"For him to get back into the England squad is a reward for his form."

Newson then diverged, noting Abraham's recent endeavours and how

"Tammy's situation at Chelsea was a bit different," he said. "He lost his place and needed to play. There was a permanent deal on the table from Roma, he took it and has obviously done really well.

"I'm really pleased with both of them. It's a testament to the coaching that's done at Cobham with these two young lads who were at the club at seven years old and now involved in the England squad alongside Mason Mount and Declan Rice."

Would you like to see Barkley in an improved role for Chelsea this season? Let us know in the comments below! Follow our CareFreeChelsea team - Jake, Daniel and Scott - and Adam on Twitter to get involved in the discussion.