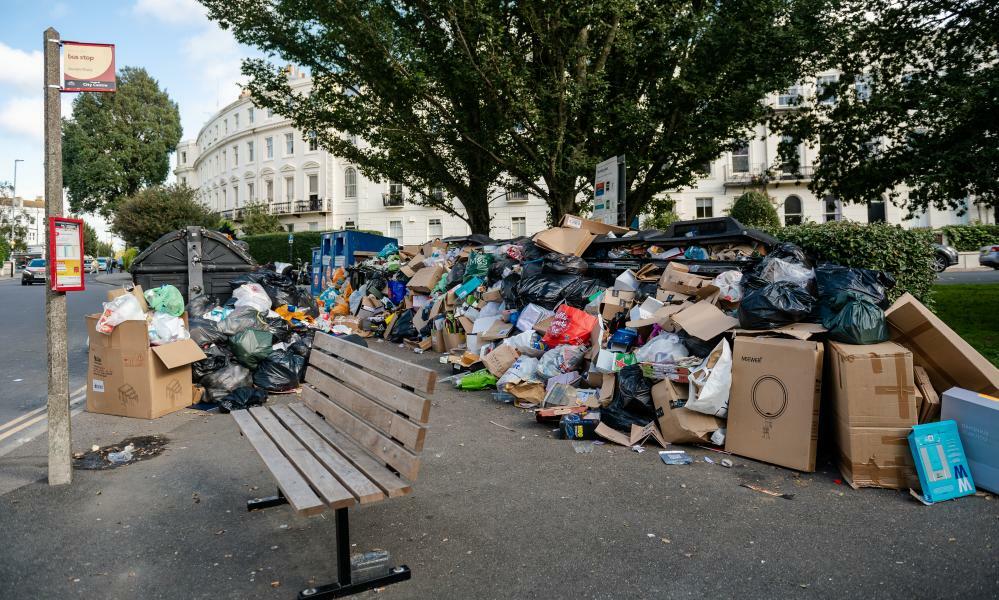 Brighton’s sea air is taking on a distinctly unsavoury tang as the smell of rotting garbage gently permeates parts of the city.

One week into a strike by refuse lorry drivers – which could last until mid-November – bin bags are piling high on its streets to the dismay of its human residents and delight of its vermin.

“It’s obviously going to attract foxes and rats and gulls. We have loads of gulls here, and they are pecking the bags open,” said Marie De Vere, picking her way through a passageway in the shoulder-high piles of bags covering the pavement in one road in the Seven Dials area of the city.

“It is really dreadful,” she added, surveying the overflowing communal bins outside the genteel Victorian terrace of Montpelier Crescent, now home to one of largest rubbish mounds in Brighton and Hove.

“I’ve read the statement from both the council and the union. But I still don’t understand the issues,” she added. “I am sympathetic to the workers, because it is a really horrible job. But I just don’t understand it at all.”

Up to 54 Cityclean refuse and recycling lorry drivers from the GMB union are staging a walkout, which began on 5 October and now looks set to last until next month in a dispute with the Green-led council over pay and conditions, including the removal of drivers from longstanding bin rounds.

With the first walkout due to end on 17 October, another has now been called to run from 21 October, after Monday’s talks with the council collapsed. The council admits it will take weeks to clear the backlog of rubbish once the dispute is settled.

De Vere said she is fortunate to have a garden shed in which to store her refuse. Geoff, 77, a pensioner who lives near to the picturesque crescent, said there was still space in his communal bin, “but it will be overflowing by Friday,” he predicted.

“I have some sympathy for the drivers. I just think the council’s at fault for letting it get to this stage. There’ll be rats. I haven’t seen myself, but I’ve heard,” he said.

In the meantime, the council is advising residents to break up and flatten boxes and cartons and store waste in their homes, or take it to the tip themselves in their cars.

“Most people aren’t going to do that,” said Ray MacKay, a warehouse manager. “I don’t want to fill my car up with smelly bin bags.

“We have a huge problem with foxes and seagulls here, so they will be having a good munch.”

The unsightly spectacle is also off-putting for seaside visitors. “Here’s one of the lovely blue sea and white cliffs I took yesterday,” said Lyn Cooper, visiting from Shropshire, as she and her husband, Dave, both photographed rubbish piles. “And here’s what I took today. The two sides of Brighton.”

All household and communal bin waste and recycling services are affected, as well as garden and trade waste services. In the back-and-forth of negotiations, Brighton and Hove Council claimed the GMB left Monday’s meeting prior to hearing the full details of the second “significant and generous” offer – a claim denied by GMB Southern.

In a statement, the council said it was “disappointing” that the offer had been rejected. “We urge the GMB to review the offer formally submitted to them in writing and come back to the table to discuss with us.”

In advice to residents, it states it has “contingency plans in place to ensure we provide as good a service as possible under the circumstances”.

People are asked to double or triple bag any rubbish they leave in the street, with those using communal bins requested to store their refuse at home if possible – though with the prospect of the strike lasting weeks, this is unsurprisingly an unattractive prospect for householders.

The GMB Southern region said it was “disappointing” that the talks had broken down. The union felt it had made “good progress in moving towards a resolution and halting strike action” but added it has seen “a clear about turn and retraction of certain positional assurances by the council team”.