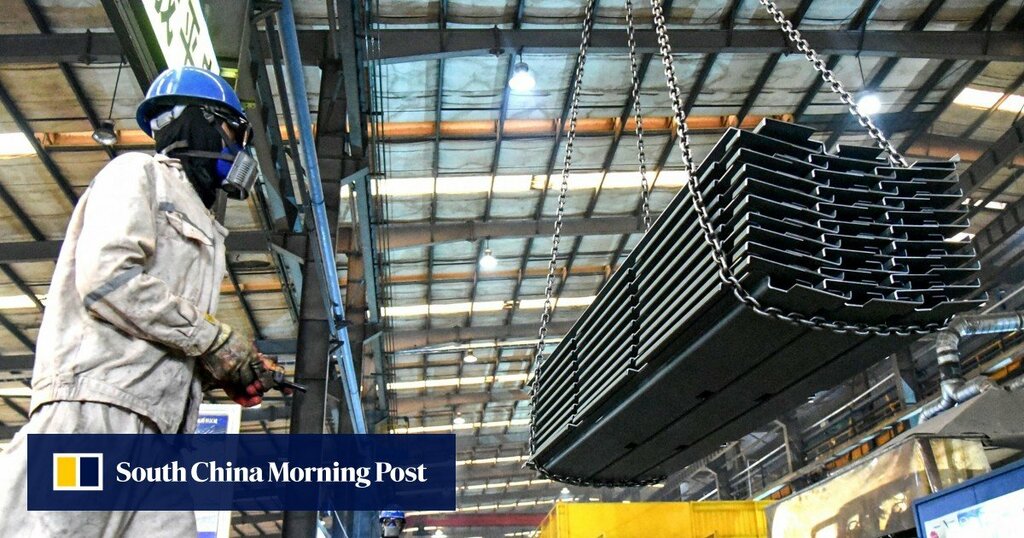 China is unlikely to make changes to its monetary policy even as factory-gate prices continue to rise and consumer inflation remains low, further exacerbating concerns of an economic slowdown, analysts say.

The producer price index (PPI), which reflects the prices that factories charge wholesalers for their products, rose by 9.5 per cent in August from a year earlier, up slightly from 9 per cent in July, making it the third highest reading since records began, the National Bureau of Statistics said on Thursday.

In contrast, China’s consumer price index (CPI) remained depressed in August, growing at 0.8 per cent from a year earlier, down from 1 per cent in July, and falling below analysts’ expectations and Beijing’s 2021 CPI growth target of around 3 per cent.

The widening gap between factory gate inflation and consumer inflation is driving concern because it means manufacturers are suffering from high raw material prices – forcing some to begin curbing production – while soft CPI growth means producer costs are not being passed onto consumers, whose spending is weak and still crimped by the pandemic.

The scenario is adding to signs of a slowdown, but Beijing has indicated it is unlikely to loosen monetary policies, such as reducing interest rates, analysts said.

To address rising factory-gate prices, Beijing will continue to ease supply constraints on raw materials, clear up some transport bottlenecks to increase supply, and provide targeted credit increases for businesses, said economists from Japanese bank Nomura in a note on Thursday.

“The divergence of PPI and CPI inflation points to a worsening profit margin for manufacturers and services providers, and may exert extra downward pressure on activity growth in coming months,” the economists Ting Lu, Jing Wang and Lisheng Wang said.

“The policy solution for Beijing is not by cooling demand, especially as the property sector has been significantly curbed and Covid-19 has kept consumption demand low.”

One way in which Beijing has tried to cool raw material prices is by raising the domestic supply of coal, including recent approval to reopen dozens of coal mines in Inner Mongolia and Xinjiang, HSBC senior Greater China economist Jing Liu said.

Chinese authorities are unlikely to increase liquidity as they would prefer to avoid stagflation caused by a rapid rebound in CPI during softer economic conditions, Citic Securities analysts said.

Stagflation – rising prices due to monetary easing and loose money supply amid slowing economic growth – is a global concern.

“It is therefore crucial to address the [high] PPI and the PPI-CPI scissors gap, [while] the room for further easing of monetary policy is restricted,” Citic Securities said in a note.

That was echoed by the People’s Bank of China earlier this week, which reiterated it would stay away from monetary easing for the rest of the year.

“The PBOC has sufficient tools to smooth the periodic disturbances and can maintain liquidity reasonably sufficient,” Sun Guofeng, the head of the central bank’s monetary policy department, said at a press conference on Tuesday.

“That deserves a high degree of attention and increased policy support,” he said.

Still, many economists expect monetary policy to be muted for the rest of the year.

“We expect monetary policy to remain prudent with a slightly loosening bias for the rest of the year because the economic slowdown calls for a more accommodative monetary policy while CPI inflation is unlikely to constrain the slight loosening stance,” HSBC’s Liu said.

But that does not mean factory-gate prices will fall or flatten, or that the CPI will rise to expected levels, analysts said.

“As Beijing sticks to its drive to cut carbon emissions and constrain the output of high-polluting sectors, we believe PPI inflation could rise further in September and October,” Nomura’s economists said.

“Base effects will start to weigh heavily on the headline rate around the turn of the year,” he said on Thursday. “And we think coal and metal prices are likely to drop back over the coming months as the recent slowdown in credit growth and tighter restrictions on the property sector start to weigh more heavily on construction activity.”