Defense Minister Benny Gantz met with US National Security Advisor Jake Sullivan and US Secretary of Defense Lloyd Austin in Washington on Wednesday to discuss the threat posed by Iran’s nuclear project and the progress made by the Islamic Republic.

The timing of both meetings lent to speculation that Israel was coordinating next moves on Iran with the US and Saudi Arabia.

During the meeting with Sullivan, Gantz “discussed Iran’s progression in its nuclear program alongside its destabilizing regional activities and emphasized the need to work closely and prepare for any future scenario,” said a readout released by Gantz’s office.

The defense minister’s visit comes as the talks between the United States, Iran and Western powers over Tehran’s nuclear program are at a stalemate.

.@gantzbe in DC for meetings with @jakejsullivan and @SecDef same time as dep. Saudi defense minister @kbsalsaud is there meeting exactly the same people.

According to the statement, Gantz “thanked Sullivan for the US administration and President Biden’s commitment to the security cooperation between the respective defense establishments,” which is “conducted within the framework of Israel’s excellent defense cooperation with the US and growing ties with regional partners.”

Calling it “an excellent White House meeting,” Sullivan said the two sides “discussed support for Israel’s security, ways to deal with Iranian aggression, efforts to reduce tensions between Israel and the Palestinians, and support for Ukraine.”

Gantz is in Washington while the new head of CENTCOM, Gen. Erik Kurilla, visited Israel for the first time and took part in the IDF’s Chariots of Fire drill, which will also simulate striking Iran.

The IDF does not believe the two sides will reach an agreement. It is seriously planning several military options should the talks fail. The military believes that in addition to sanctions, the Americans need to place a military option on the table.

While in Washington, Gantz also met with his US counterpart, Secretary of Defense Lloyd Austin, and thanked him for his support for the recent passing of the $4.8-billion security package.

During the visit with Austin, which took place at the Pentagon, the two men also discussed mutual security challenges. These included Iran and Israel’s Plan B should the talks fail, as well as additional sanctions that could be placed on the Islamic Republic.

“Gantz emphasized the historic changes in the region alongside the mounting threat posed by Iran’s aggression and support for terrorism,” read a statement released by his office following the meeting. “In light of the changing regional architecture, he stressed a critical need for a practical coalition under US leadership, together with regional partners in facing Iran.”

On Tuesday, the defense minister said that Iran was currently trying to complete the production and installation of 1,000 advanced IR6 centrifuges, including at a new underground facility being built near Natanz.

“Iran continues to accumulate irreversible knowledge and experience in the development, research, production and operation of advanced centrifuges,” he said.

Tehran is just a few weeks away from accumulating enough fissile material sufficient for one nuclear bomb, Gantz said.

The defense minister also spoke to Sullivan and Austin about the recent wave of terrorism in Israel that has claimed 18 lives since March 22, and discussed the ongoing operational activity carried out to thwart terrorism and stop incitement.

“Minister Gantz emphasized that Israel will take the measures necessary to defend its citizens and sovereignty,” the statement said, and that “Israel’s defense establishment is continuing its policy of promoting confidence-building measures vis-à-vis Palestinian civilians that are not involved with terrorist activity.” 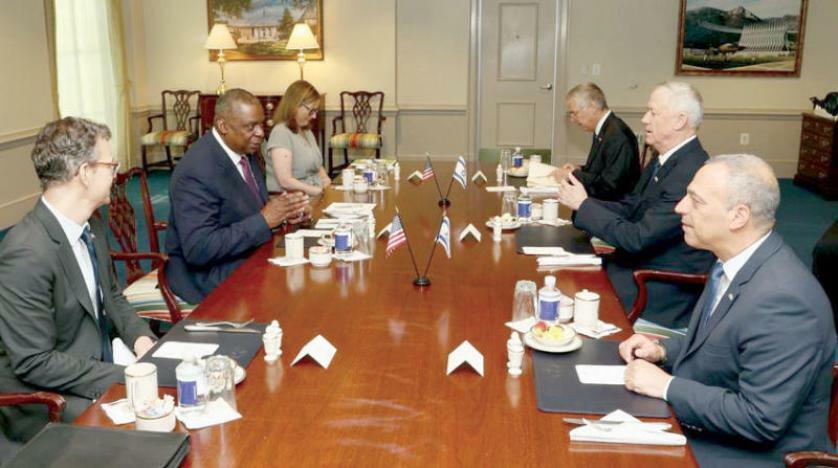 The Jerusalem Post
Defense Minister Gantz leaves for US, will meet with Austin, Sullivan

"I will discuss with them the issue of increasing security cooperation and addressing the region's challenges – especially Iran."