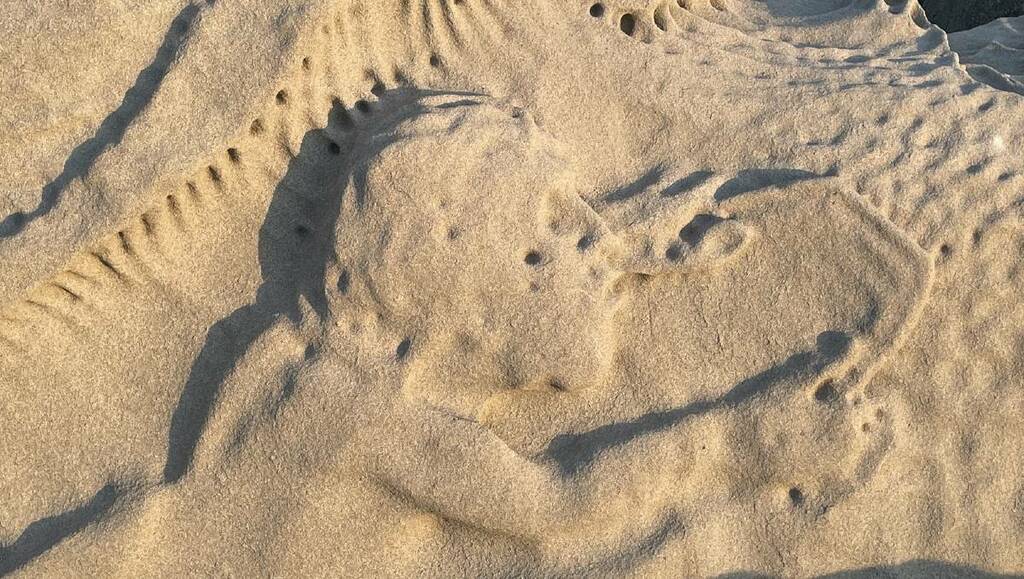 FOR decades walkers, cyclists and anglers were puzzled by faces and other strange images carved into Newcastle's ocean rock walls.

Most of these rock carvings have now sadly vanished over time, eroded by wind and salt spray on the long stone platforms guarding our once dangerous harbour entry.

Our best documented early artworks were patiently chiselled into old sandstone boulders on Stockton's northern breakwater (or break wall) finally being completed back in 1912.

For years, the largest, most famous name cut into the soft rock was that of E. (for Eddie) McDermott, dating from April 1911.

Located near the start of the Stockton seawall, the landmark rock finally disappeared over the side in May 1996, according to old-time Stockton residents as the Port Corporation continued strengthening the breakwater with heavy-duty, replacement rocks.

For many years people speculated that most Stockton rock carvings had originated in the windjammer age created by homesick, foreign sailors.

Some seamen then could still carve intricate patterns called scrimshaw on whale teeth, if available. Such men were often stranded in Newcastle, often on the Stockton shore, for up to three months around 1900 awaiting coal cargoes.

Maybe some sailors did carve something, sometime, but anecdotal evidence points to the most obvious stone carvings being created by three Stockton men - Eddie Mc Dermott, Clive Webster and Ernest ("Uncle Ern") Yates.

All were keen fishermen. But more about these talented amateur sculptors later.

The Stockton breakwater these days though is better known for other things. One is feral cats, and the other is small memorial plaques and rocks colourfully painted with names and dates in tribute to loved ones who have passed away.

Our painted Stockton rock wall is smaller, but reminiscent of the parade of painted rocks (since 1995) on the southern breakwater of Port Macquarie's Hastings River.

More carefully crafted items on rocks, such as faces, are an entirely different matter, and not always displayed in the open.

Our Pacific neighbour East Timor, for example, has some of the oldest rock carvings in South-East Asia. But six such ancient stylised face carvings, or petroglyphs, weren't discovered until 2009 as they were hidden in a cave.

Carrying on the best tradition of public rock carving, again of a face, is some modern art in Mine Bay, Lake Taupo, on New Zealand's north island. Chiselled into rock is a marvellous, majestic tattooed face of legendary Maori navigator Ngatoroirangi, a '"star God descendant" from 1000 years ago.

Although unintended, it soon became a tourist attraction. It can still be reached only by boat, and is best seen by canoe or kayak.

Far more visible, but this time back here, is another modern artwork gracing the end of Nobbys breakwater and still defying the ocean's fury.

This very accessible, if ageing, artwork (five bas relief sculptures, really) were actually cast in concrete and unveiled only 24 years ago.

The grey blocks (pictured) were commissioned by the 1997 Newcastle Bicentenary Events Corporation.

But these works by artists Julie Squires, Greg Bell and Mini Heath, tend to be overlooked today, unlike the more showy, painted rock tributes on the parallel Stockton breakwater.

The concrete bas-reliefs depict imaginary compositions, including a reclining female form, portholes, a child, skyscrapers and nearby industry. One standout image is of a puzzled seafarer adrift on his small sailboat inside a corked bottle.

Not too far away though, near Nobbys headland itself, and by an artist unknown, is probably the last true rock carvings visible to the naked eye on this stretch of breakwater.

It's a clever, but fast eroding, depiction of a surfer trying for a wave among sandstone rock forms, themselves weirdly sculptured by erosive wind.

It's a constant battle to keep both breakwaters intact in the face of the sea's fury. The old sandstone blocks, which helped create the older Nobbys break wall from 1818, and ideal for carving, have all but disappeared. They have been replaced by harder, dumped granite boulders.

Untold thousands of tonnes of rock have been used to finish, then repair, both breakwaters. Nobbys break wall, for example, is forever being repaired to withstand constant hammering from waves. The initial building section of Nobbys breakwater required 90,000 tons of stone alone and, by 1886, breakwater maintenance needed harder stone (weighing no less than 10 tons) brought from Waratah quarry.

Then by 1950, 60-ton cast concrete blocks, made on site then tipped into the ocean, became a regular feature. Little wonder so few of the original, easily shaped sandstone boulders survive on both breakwaters.

Now, back to Stockton's rock carvers. Before his retirement, Eddie McDermott (1899-1972) worked at BHP Steelworks as an engine driver. His hobbies were fishing and creating figures in the soft sandstone on the breakwater barrier while waiting for a nibble on the line, particularly from jewfish or mulloway.

His other smaller items left as a legacy have been either vandalised or their beauty damaged by corrosive wind and wild sea.

Another historic breakwater rock craftsman was Ernest "Uncle Ern' Yates. Born in 1868, this former shipwright was a prolific artist, according to the Stockton Historical Society (SHS).

Besides working in stone, he also painted, and sculpted wood, once carving a straight piece of wood into a hand holding a bible. As well, he even shaped shin bones into small, intricate figures of art from butcher shop leftovers. He is also thought responsible for rock portraits of Britain's Queen Victoria and Jesus on the breakwater dating from around 1914.

The third and equally skilled carver was a local professional fisherman Clive Webster. He's credited with carving two "compass" stones on Stockton break wall, of which one still exists. (The other one, at the end of the breakwater, disappeared ages ago.)

They were created in 1967, relatively late in the historic timeline of local rock carvings.

The story goes that Webster, who was tired of answering regular queries while fishing about which way the wind was blowing, carved a compass on two rocks.

Regrettably, as SHS member Jean Purtell once reported, the surviving "compass" stone had since been moved a number of times and "may no longer line up correctly to a true north position".